In a hotel room in Albania, Afghan women await new lives — and watch their homeland collapse 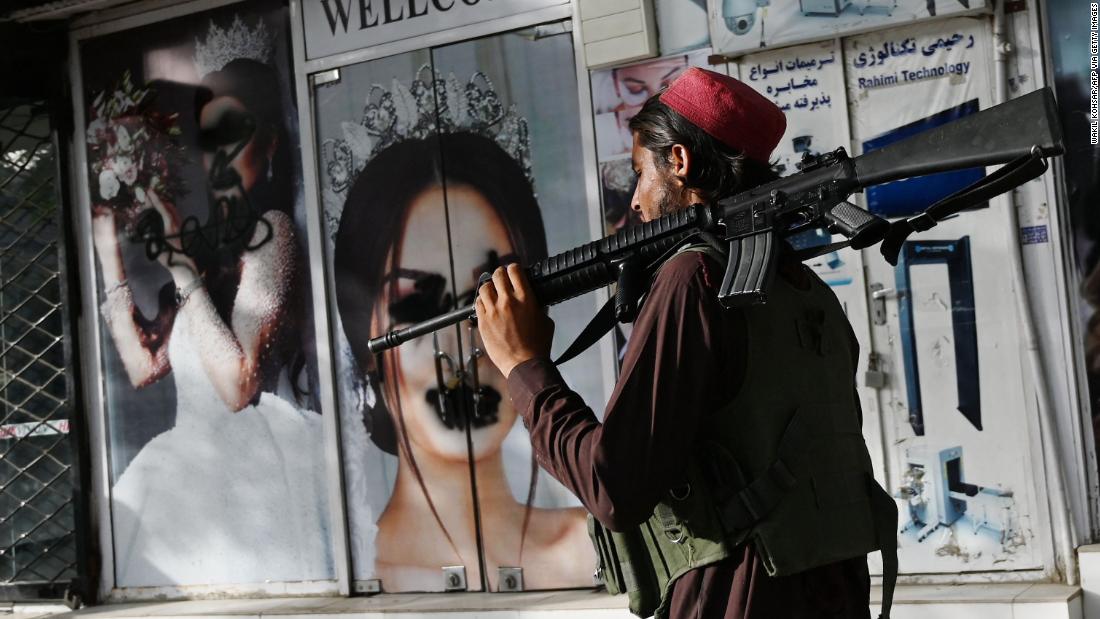 Throughout the day I check in on the fellow Afghan women sharing a roof with me at our hotel in the Albanian resort town of Shengjin. They joke that I am Albania’s new therapist. We play card games and visit Albanian pastry shops where the deserts taste bittersweet, like our exile.

We try to fill our days with activities to make the time pass more quickly. Last month, I attended a trauma care course, facilitated by the international relief organization Samaritan’s Purse, where we talked — or at least tried to talk — about all we left behind.

In the courtyard of the hotel there is a strange replica of the Statue of Liberty. My two sons always try to climb it. I try not to take its look of cheap plasticity as some type of omen that liberty in our next home –if there is a next — is just a puffed-up façade like the version we were sold in Afghanistan.

There, the situation is bleak. The United Nations Development Programme projects that by the middle of this year Afghanistan could face “universal poverty,” with 97% of Afghans living below the World Bank-designated international poverty line of $1.90 a day. It’s an increase of up to 25% on the poverty rate prior to the US withdrawal, according to the UNDP.
Last week, the UN launched its largest single country aid appeal ever: $5 billion in the hope of shoring up collapsing basic services, which have left 22 million in need of assistance inside the country, and 5.7 million people requiring help beyond its borders. Afghanistan has become the world’s largest humanitarian crisis. But no amount of money will bring peace to our troubled souls.

Whenever I wash our clothes in the sink of our hotel room, I think about the last day of our old lives. Back in August, I was washing my children’s clothes when a friend texted me to immediately pack my family’s bags. My beloved hometown Herat, a relatively liberal city in western Afghanistan, was most likely going to fall to the Taliban within the next 24 hours. And it did.

Forces had been advancing for months, but I wasn’t aware how quickly the situation was deteriorating. Still, I had been worried for some time that the Taliban would try to make a comeback. And as a practicing human rights lawyer, I knew the Taliban would not approve of my career.

In June, after having led a course on domestic violence awareness with the US government, I applied for a Special Immigrant Visa to America. I never did hear back from the embassy, and fear my application was lost in the administrative mess. But I thought I had the luxury of time. That was until I accepted the reality: the Taliban would surely take my city and most likely Kabul soon after. And upon their arrival, all my dreams of living in a democratic, equal society would vanish.

My husband and I quickly packed a few suitcases, mostly clothes for our two children and my stepdaughter, and caught the last commercial flight to Kabul. In the rush to leave, I left behind some meaningful items, including my university diploma. I was educated entirely in Afghanistan, and am the first woman in my family to complete secondary education, let alone receive a university degree.

After escaping Herat, my family and I spent a month fearfully alternating between a European nonprofit organization office in Kabul and a friend’s apartment. The Taliban know who I am. For the past decade, I have been advocating for domestic abuse survivors and leading informal but determined coalitions of women — psychologists, doctors, activists, lawyers, educators — to take on this country’s endless war against women.

In Kabul, we attempted to get to the airport some 15 times. Contacts from around the world tried getting us on flights but to no avail. To Qatar? To Mexico? The US? I didn’t care where, I just wanted to get out.

Finally, in August, we got on a plane to Albania, one of the poorest countries in Europe. We’ve been here for the past five months, put up by the Albanian government in a seaside resort along with almost 1,000 other Afghans. I have not been able to reapply for a Special Immigrant Visa, and we’re waiting on word when our new life will begin in America or Canada. We might be here for another year. Maybe two. Or maybe a week. Who controls time? I no longer look at calendars.

It wasn’t always like this. I knew I wanted to be a lawyer to help women live better lives with the dignity they deserve — to prevent them from being forced into marriages they did not want for themselves and from staying in abusive situations for fear or a lack of other options.

My mother was forced to marry my father when she was only 12 years old. In order to go to school, my mother and I made up lies so that my father would let me leave the house. We told him I was going to the mosque or to Quran studies. When the Taliban were in power, I was a young teenager, and this became very difficult, but we always found a way for me to learn.

We eventually convinced my father to let me attend university, but my sister wasn’t so lucky. She was forced into marriage at the age of 14.

While I have childhood memories of the Taliban beating women in the streets for not wearing their burqas properly, my later teen years were filled with promise. There was countless international funding for programs targeted at women’s equality and conferences filled with ‘important people’ from foreign countries who told us we could be anything we wanted to be.

Women’s rights were supposed to be the success story of the 2001 US invasion, but the legacy of war has been killing our women for years. An estimated two-thirds of Afghan girls do not go to school, 87% of Afghan women are illiterate, and more than 70% face forced marriage.
Still, over the last two decades, the US spent hundreds of millions of dollars promoting women’s rights in Afghanistan, and a whole generation of us entered our careers with genuine hope for gender equality. Now, it all feels like empty slogans. What will become of all the impressive women I know who are lawyers, doctors, teachers, politicians? The Taliban claims it won’t hurt them, but the reality is likely to be far different, and already the women of Afghanistan are being forced inside again.
Just last week, photos circulated on social media of workers at clothing shops in Herat cutting off the heads of female mannequins. Taliban authorities have labeled them “un-Islamic.” Earlier this month, they banned women without male chaperones from entering cafes in the city. CNN has not been able to independently verify these reports, though they tally with what I’ve heard from Afghans living there. Last month, the Taliban also banned women from traveling farther than 45 miles without a close male relative.

Four years ago, on International Women’s Day, I gave birth to my second son. I made a promise to myself that I would never raise my children in a country where women are second-class citizens.

Unfortunately, our country’s future has been decided. And it doesn’t include us. So, I will wait for another plane to take us even farther away from a country I love but that doesn’t love me. I will wait to build us a new life. Afghan women are strong, but we shouldn’t need to be this strong.