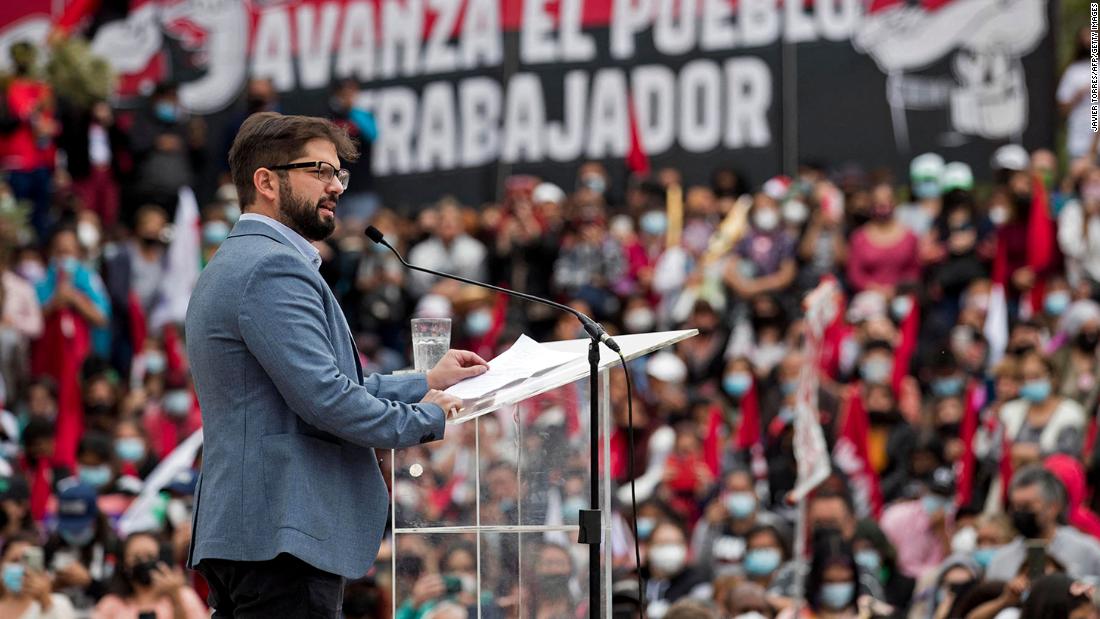 If he wins the run-off vote, Boric will become the country’s youngest — and most left-leaning — president in its modern history.

Boric is running on a broad coalition ticket that includes the Communist Party and champions a welfare state model that promises to tackle the country’s rising inequality. Last month, in the first round of votes, he won nearly 26% of the ballot share.

Meanwhile, Kast, a staunch defender of former dictator General Augusto Pinochet’s regime and the free-market, garnered 28% of votes in the first round. The 55-year-old former congressman’s agenda includes a tax cut for companies, building barriers in the north of Chile to prevent migrants from entering illegally and abolishing abortion, among others.

Sunday’s election is now on a knife’s edge, with who wins largely depending on the ability of each candidate to draw in voters from the center ground.

For his critics, Boric is radical and inexperienced. But those qualities are also driving his popularity among young Chileans, many of whom came to know him during the last two years of social unrest.

In October 2019, massive protests shook the country as thousands demonstrated for better pensions, better education, and the end of an economic system that they believe favors the elite. Boric quickly became the most vocal representative of this social movement and boosted his leadership by rejecting the legacy of the center-left coalition that governed from 1990 to 2010.

That movement led to outgoing President Sebastian Pinera to agree to a referendum to change the constitution, which was inherited from Pinochet´s bloody dictatorship. Last year, Chileans overwhelmingly voted to draft a new one. That process is in now in the works, with the new constitution to be voted on in a new plebiscite sometime in mid-2022.

Boric’s political platform has been riding on that wave, which includes proposals for a more inclusive public health system, to cancel student debt, to raise taxes for the super wealthy and a revision of the state’s private pension system — which was inherited from Pinochet’s military regime.

Sociologist and communication strategist Eugenio Tironi told CNN that Boric’s policies are ticking all the boxes for millennials.

And he’s polling extremely well in that age group.

Pablo Argote, a researcher of political science at Columbia University told CNN that Boric is overrepresented by voters 35 and under, and polling particularly well among those under 25.

“He embodies changes better than other candidates,” Argote said.

“In politics, the intensity of the preference matters, the fact that people feel very excited about a candidate matters. And Boric has that,” he added.

Responding to a generation

Born in 1986 to an educated middle-class family in the country’s southernmost Punta Arena region, Boric attended one of the most elite private schools there before studying law at the University of Chile in Santiago. He didn’t graduate but it took his interest in activism to new heights.

In 2011, he became one of the main leaders of a historic student movement demanding free education for all, which eventually led to a wide educational reform. In 2013, he was elected to Congress, and in 2016, he started his own political party, the Autonomist Movement.

Boric has long presented himself as an outsider and has been prone to reach agreements with other political sectors, even if it means making waves in his own coalition.

Far from Pinera’s more buttoned-up and pragmatic style, Boric is perceived as an emotional leader: He has publicly disclosed that he suffers from obsessive-compulsive disorder and spent two weeks in a psychiatric hospital.

He also makes it a point to own his mistakes — and to apologize for them publicly. Although more traditional voters see this as a weakness, Tironi says it has helped him gain momentum.

“Part of his charisma is his tendency to go forward and then move back, to be keen to rectify and apologize. He is like a gamer. If things don’t go in the direction he thought, he resets,” Tironi said.

“That is attractive to an important segment of voters, above all the young,” he added.

Supporter Tomas Diaz, a 32-year-old entrepreneur with a sustainable biking business, said that he says has admired Boric’s leadership style since his days as a student protestor.

“He is open and respects agreements — and that’s what we need. He responds to my generation’s way of seeing the world and cares about the environment,” he said.

“He also represents me because I believe the state must be like a mother who protects all citizens — and that anyone can do whatever they like with their private lives,” Diaz said, taking a swipe at Kast’s conservative social agenda.

Diaz added that Boric’s policies, which also include the promotion of women’s rights, LGBTQ+ rights and the environment, speak to him — unlike candidates from his parents’ generation.

“We are a generation of immediacy, and we don’t want to wait like our parents did. We want changes and we want them now,” he said.

But it is just that attitude that makes some voters sceptical of Boric’s policies, with many fearing that attempts to dramatically transform the country while it is already in the middle of drafting of a new Constitution could push foreign investors away and put additional strain on the economy.

Economist Raphael Bergoeing, who is also the president of Chile´s National Productivity Commission told CNN that many of Boric’s policies “go in the right direction, but I am afraid that it will act as a brake on investment and make things harder for everyone.”

“Trying to do too many things in a short amount of time is the best recipe to do very little,” he said.

Boric also faces another challenge: Getting moderates to embrace his alliance with the Communist Party, particularly around his take on the country’s private pension scheme.

Earlier this month, Boric voted on a measure proposed by a group of representatives to withdraw more funds from state’s private pension, despite his advisors warning him that it was bad policy. The policy is aimed to deliver financial assistance to Chile’s poorest populations throughout the pandemic. However, economists argue that it is having a negative impact on the country’s financial system and will increase inflation. Boric and his coalition’s persistence to keep the initiative alive is viewed by critics as an attempt by more radical political groups — Communists included — to scrap the private pension system all together.

Boric’s supporters see the private pension scheme as a marker of the country’s widening inequality, while others view it as the foundation of Chile’s strong economic market.

Kast is taking advantage of Boric’s association with the Communist party by activating “the fear of having a situation like Venezuela,” Tironi said. “But I believe Boric is more like Greta Thunberg than Fidel Castro,” he added.

Still, Boric has softened his tone in the lead up to this weekend’s vote to draw in the middle, saying that his proposals would be implanted gradually, that he believes in private property and in alliances between the private and public sector.

He’s also brought in center-leaning economists to his team in an attempt to win over those moderate voters. And this week, he met with former president and UN High Commissioner for Human Rights Michelle Bachelet, who has officially endorsed him.

“He’s been smart toning down his language, lowering expectations, and now presenting himself as the continuation of the trajectory of change previously proposed by the center-left coalition he used to criticize,” Argote said, adding: “He still faces many challenges and may have conflicts within his coalition if he gets elected, but for now, I believe he has a good chance to win.”