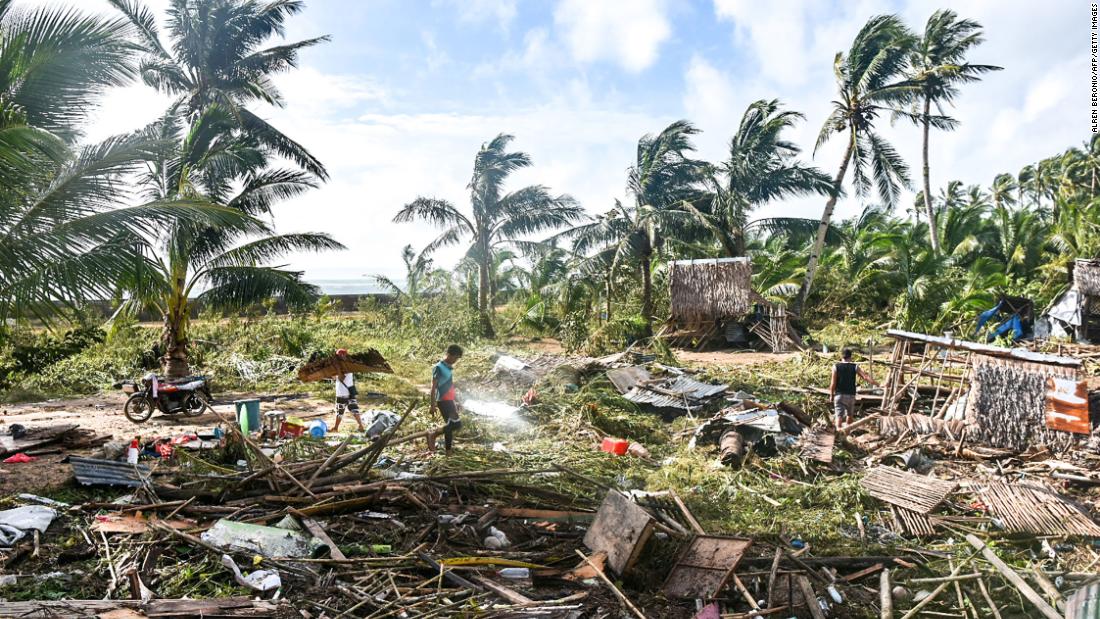 Rai, the 15th typhoon to hit the Philippines this year, weakened slightly from a Category 5 to a Category 3 storm after making landfall Thursday on Siargao Island, a popular tourist and surfing destination on the central east coast.

Communication and power was out in several parts of the Philippines Friday, making rescue efforts difficult — with officials unable to determine the extent of damage due to the outages.

More than 30 transmission lines were down in the Visayas and Mindanao region, a major group of islands, the NGCP said Friday. More than 20 million people live in the Visayas, according to 2020 official figures.

“Homes are destroyed or partially damaged,” Gordon said. “There’s an explosion of debris from falling trees and falling buildings. There were two casualties in the area, two dead from fallen trees and a fallen wall.”

Villagers were seen scrambling to salvage whatever they could from their damaged homes.

Around 332,000 people have been evacuated from their homes, a spokesperson from country’s National Disaster Risk Reduction and Management Council (NDRRMC) said on Friday.

Rai is expected to remain strong for another 24 hours before gradually weakening. It will spread some rainfall to Vietnam and China’s Hainan province, but the impact is not expected to be too significant.

The human-induced climate crisis is making typhoons, hurricanes and cyclones more intense and destructive, and the Philippines is one of the world’s most climate-vulnerable nations.

In Surigao Province, more than 2,600 people have been evacuated as of Wednesday evening, according to the state-owned Philippine News Agency.

Photos from Surigao show one sports complex turned into an evacuation center, with plastic tents set up in a large hall and families asleep on rugs and tarps on the floor.

Meanwhile in Eastern Visayas, more than 45,000 people have evacuated to government shelters in the Eastern Visayas region, according to the National Disaster Risk Reduction and Management Council on Thursday.

“We are getting pounded already by strong wind and rain,” said Governor Ben Evardone of Samar Province, located in Eastern Visayas.

Risks of floods and landslides

In Tacloban City, just outside Samar, hundreds of residents have also taken shelter in evacuation sites. Many lived through Super Typhoon Yolanda, which killed more than 6,000 Filipinos in 2013 — and they’re not taking any chances now.

“We are concerned that this storm is taking the same path as the typhoon in 2011, and the other in 2013,” said Karen Janes Ungar, the country representative for the humanitarian organization Catholic Relief Services Philippines.

“However, we have learned a lot from both of those previous disasters, and in a lot of disaster preparedness … for this emergency.”

The biggest concern, she added, are smaller towns on the coast, home to fishermen and poorer populations that might not have access to government announcements or are unable to evacuate.

Thousands of villages in the storm’s projected path are at high risk of flooding and landslide, with the region’s soil already saturated and unsteady from the week’s heavy rain, according to the country’s Mines and Geosciences Bureau, which urged local authorities to prepare evacuation plans.

Airlines have canceled dozens of flights, while transport authorities banned sea and land travel in the central and southern Philippines, leaving thousands stranded at ports.

Humanitarian organizations and aid agencies are also on the ground, working with local authorities to prepare for the storm and assist in evacuations. Teams from the Philippine Red Cross are spread out across the east coast, helping organize first aid teams, food and water, and supplies such as blankets and safety equipment.

“Filipinos are tough but this Super Typhoon is a bitter blow for millions of people who are still recovering from devastating storms, floods and Covid-19 in the past year,” said Philippine Red Cross Chairman Richard Gordon in a news release on Thursday.

Super Typhoon Rai is the 15th storm to hit the country this year — compounding the struggles of people still recovering. Millions are still rebuilding their homes and livelihoods, especially after several devastating storms late last year, according to the Red Cross.

Typhoons, hurricanes and cyclones — which are essentially the same weather event but in different parts of the world — are producing more rainfall, moving more slowly once they make landfall and generating larger storm surges because of climate change.
A recent study by researchers at the Shenzhen Institute of Meteorological Innovation and the Chinese University of Hong Kong said that typhoons in Asia could have double their destructive power by the end of the century. They already last between two and nine hours longer and travel an average of 100 km (62 miles) further inland than they did four decades ago.