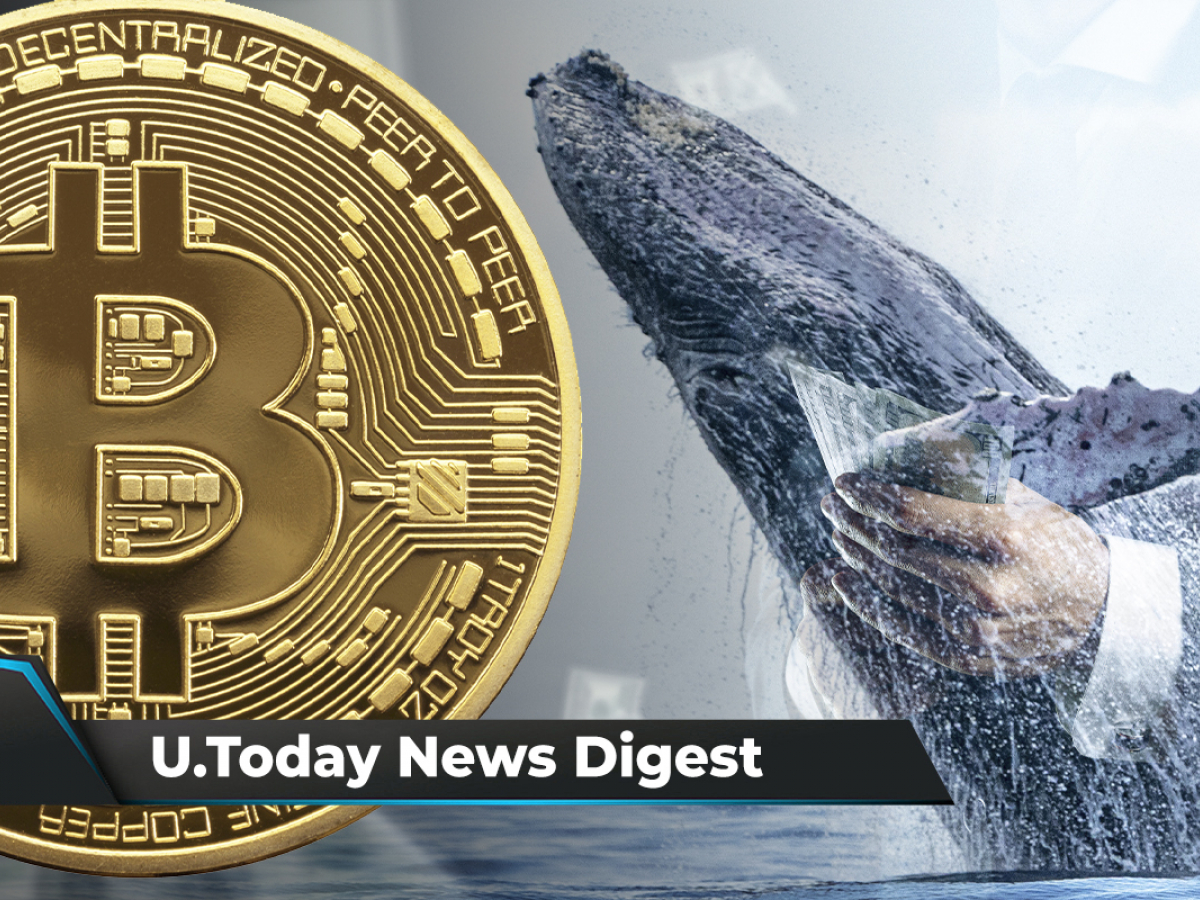 U.Today’s news digest keeps you updated on the latest events in the crypto industry

Here are the top five news stories over the past day presented by U.Today.

Per data shown by CoinMarketCap, the crypto market found itself in a sea of red yesterday. Over the past 24 hours, Solana (SOL) and Terra (LUNA) shed more than 8%, while Avalanche (AVAX) plunged by almost 10%. The top meme coins, Shiba Inu (SHIB) and Dogecoin (DOGE), dropped by 5% and 4%, respectively. The “red sea” wave has covered Bitcoin as well; after Fed Chairman Jerome Powell mentioned that the central bank may raise the benchmark interest rate after its next meeting in March, the flagship crypto plunged to $35,535. Ethereum has also dropped lower, together with Bitcoin.

According to WhaleStats data, yesterday, SHIB managed to overtake FTT, the native token of the FTX exchange, by dollar value, among the top 1,000 ETH whales. The total holding value of SHIB in USD constitutes a whopping $1,665,876,442. Even though FTX took its place above SHIB for a hot minute, the coins have switched places again and, today, the meme token remains the largest asset by total USD value in the wallets of the top ETH whales.

SHIB token can also pride itself on a rising number of holders. The count of people holding Shiba Inu has reached a new record of 1,160,123.

Yet another fast food chain decided to join the crypto frenzy, apparently inspired by Elon Musk’s recent tweet about accepting Dogecoin addressed to McDonald’s. MrBeast Burger mentioned the centibillionaire in its post of Jan. 26, saying that if Musk retweets it, the company will begin working on accepting DOGE. The Tesla CEO has so far left the offer unanswered. However, Dogecoin creator Billy Markus retweeted MrBeast’s message and also urged the Doge Army to show that it is strong enough and can provide the necessary engagement for MrBeast Burger.

After Bitcoin and altcoins took a hit from the Fed’s meeting, the crypto market reacted with over $100 million liquidated on various exchanges. Traders took on $37.46 million worth of losses from Bitcoin liquidations, while Ethereum liquidations stood at $29.96 million. The largest single liquidation order, on Bybit, was valued at $5.55 million.

Meanwhile, the Crypto Fear and Greed Index remains in “extreme fear,” with Bitcoin funding rates across major exchanges continuing to be negative.

Peter Brandt, a well-known veteran commodity trader, provided a chart showing how the purchasing power of 100 U.S. dollars has decreased since 1947. It has been dubbed a “sure-thing trade” by the seasoned trader, who claims it is the only trade that he has absolute confidence about. The purchasing power of the U.S. dollar, as well as other fiat currencies, will continue to erode over time. Twitter users in the comment thread began stating that Bitcoin solves this problem. Even now, when BTC is down almost 50% from last year’s historic peak, it remains up 206% since November 2020.