UK government bans virginity testing, but has still not apologized for past abuses 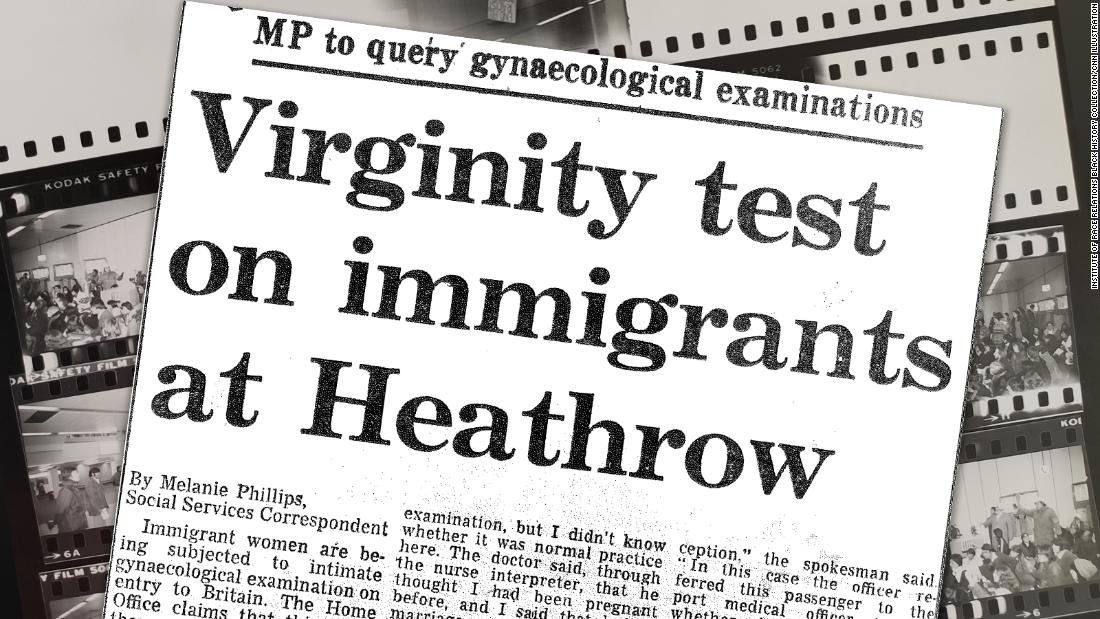 The member of the British Parliament who proposed the changes to the law, Richard Holden, spoke of being “tipped over the edge” after a radio story almost two years ago made him aware of these two inextricably linked practices that predominantly affect immigrant women in the United Kingdom.

“I couldn’t believe it was still happening or that nobody had taken it up,” Holden told CNN. “I knew I had to campaign to change the law.”

A government spokesperson told CNN that the amendments were evidence of a commitment to “safeguard all women and break down the pervasive myths that surround virginity and a woman’s sexuality.”

While the proposed changes have been welcomed, Britain has a checkered history with virginity testing. In the 1970s, immigration officers did not safeguard all women with the state conducting virginity testing on the same demographic it is now trying to protect.

The UK Home Office tested women as a means of immigration control and for this, a formal apology has never been issued.

Balraj Purewal, director of the Indian Workers’ Association in the UK, remembers the day he learned about the violations taking place at UK borders.

It was 24 January 1979 and a visibly baffled young Indian man had come to the offices of the Southall Youth Movement (SYM) seeking help. The man told Purewal that he couldn’t fathom why his fiancée, who had just landed in London, was bleeding and seemed traumatized.

He explained to the young SYM activist that while he had been waiting for his partner at Heathrow airport, immigration and medical officers had whisked her away for a “clearance interview”. When she finally came out of the room, the 35-year-old Indian school teacher wouldn’t speak. “Something must have happened to her in the immigration room,” Purewal recalls being told.

It would take both men a few days to learn that she had undergone a so-called two-finger virginity test at the UK’s largest airport.

The schoolteacher’s abuse received national attention after she shared her experience with The Guardian, describing how a medical inspector had examined her to confirm she had not borne children and was in fact entering the country as a virgin, to be married.

Archival records from the Home Office, seen by CNN, show that immigration officials suspected the woman was lying about her age and marital status, and sought permission for a doctor to conduct the internal examination.

After the story went public, the department responsible for immigration, security, law and order, the Home Office, offered the young woman £500 amid news reports that her partner had planned to file a writ against the Home Office.

The evidence of the proposed payoff was later found by two Australian academics, Evan Smith and Marinella Marmo while conducting research into discrimination in British immigration history. Additional sources, including a debate in the Houses of Parliament would reveal that the Indian teacher’s experience was by no means exceptional, nor was vaginal testing only happening at Heathrow.

“We found that gynaecological as well as other bodily examinations were conducted on South Asian women at British High Commissions in India, Pakistan [and] Bangladesh, as well as Heathrow,” Smith tells CNN.

He adds that a 1980 document from the then-Foreign and Commonwealth Office estimated that “between 120 and 140 South Asian women were subject to some kind of bodily examination for immigration purposes over the decade up to 1979.” Of these, 73 were in Delhi, 10 in Bombay and 40-60 in Dacca — now Dhaka. The number of cases in Islamabad and Karachi remain unknown.

In March 1977, two years before the schoolteacher’s case came to light, a journalist, Amrit Wilson, received a message from a friend about a 16-year-old Pakistani national who had been detained at Heathrow.

The girl had “landed in Heathrow decked up in full bridalwear, anticipating a wedding to her fiancé,” says Wilson who is now a writer and activist on issues of race and gender in Britain. Instead, the teenager was held at the Harmondsworth detention center for a week.

At Harmondsworth, the young woman described to the reporter how she’d undergone a mandated “sexual examination,” intended to prove that she was younger than she had claimed.

In her 1978 book, Finding A Voice: Asian Women in Britain, Wilson says the girl had told her that there’d been two men, one of them white, the other spoke Urdu and was probably from Pakistan. The examiner had alleged that she was not yet 16 and as a result, she was deported to Pakistan.

Wilson recounts other harrowing stories. Such as that of a heavily pregnant 18-year-old from Mumbai who came to the UK following an arranged marriage. The couple were separated at Heathrow with the woman being taken to Harmondsworth where Wilson says she went into labour while being superficially examined by a doctor and a nurse. Delays getting to hospital resulted in the death of the young mother’s baby. The loss of the child — and the trauma it caused — were both direct results of the gendered abuse in British immigration custody, Wilson explains.

The physical and psychological harm from these interventions have also been independently assessed. In 2015, the Independent Forensic Expert Group comprising “preeminent independent health specialists who provide technical advice and expertise in cases where allegations of torture are made” concluded that “virginity examinations are medically unreliable and have no clinical or scientific value.” They went on: “These examinations are inherently discriminatory and, in almost all instances, when conducted forcibly, result in significant physical and mental pain and suffering, thereby constituting cruel, inhuman and degrading treatment or torture.”
A joint statement by various United Nations agencies in 2018 echoes these views, calling virginity testing a “violation of human rights.”

‘A form of state rape’

The Joint Council for Welfare of Immigrants is one of the British organizations which has previously backed calls for a formal apology from the state. Its chief executive, Satbir Singh, says the conclusions drawn from the tests show the UK Home Office officials were making “all kinds of assumptions about South Asian culture.”

The rationale of the British government, Singh believes, was that if a married woman had a hymen that was perceived to be intact — “perceived” because the idea that the hymen completely covers the vaginal opening until it is broken during intercourse is a misconception — this was proof that her marriage was a sham. If an unmarried woman’s hymen was concluded to not be intact following the examination, immigration officials thought this must mean she was already married. 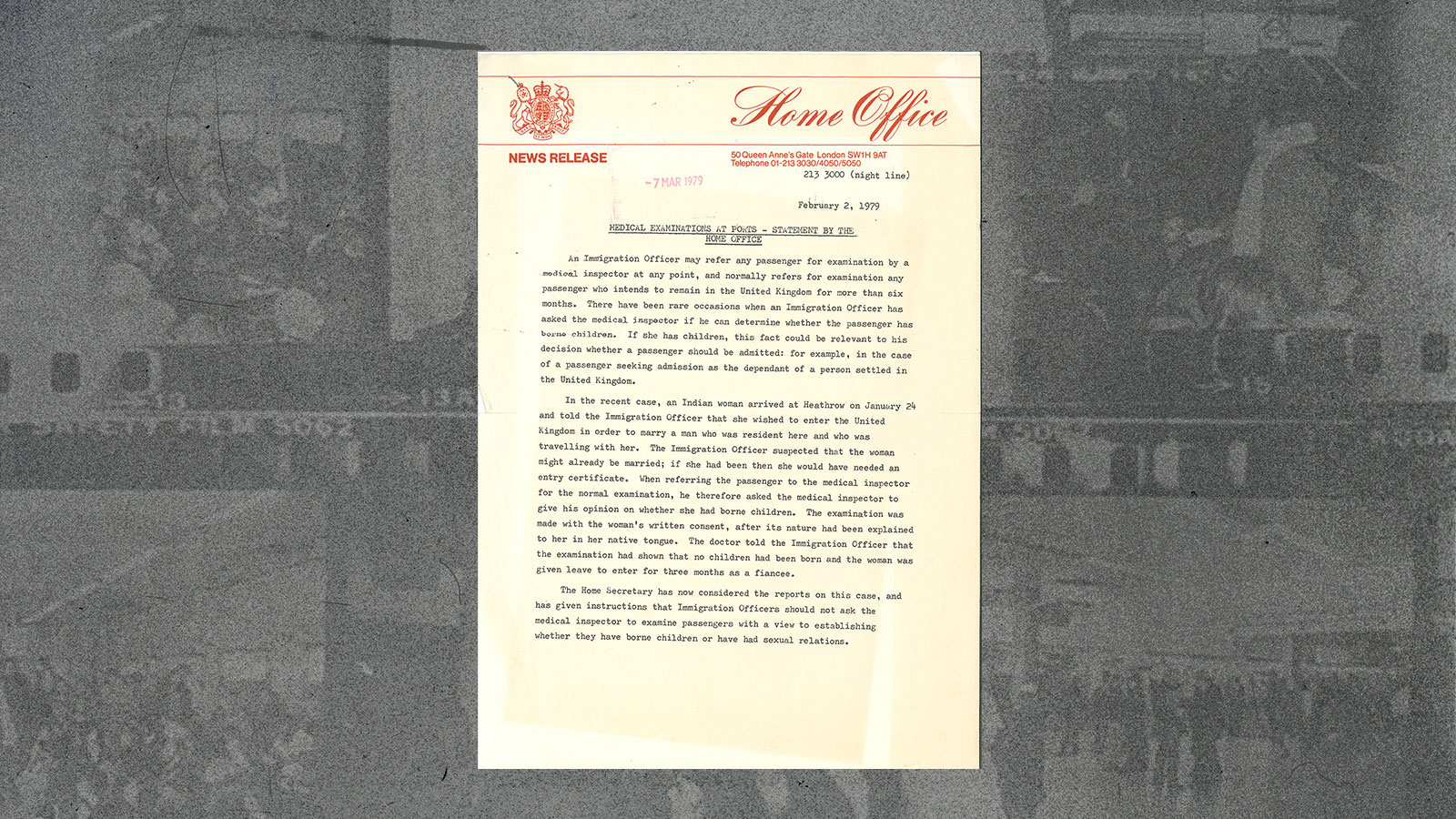 After the story of virginity testing by immigration officers at Heathrow broke, the Home Office issued a news release dated 2 February 1979. In it, the department admits to carrying out tests on “rare occasions” but added that Home Secretary, “having now considered the reports” had asked that the practice be stopped. (Courtesy of Institute of Race Relations, Black History Collection) 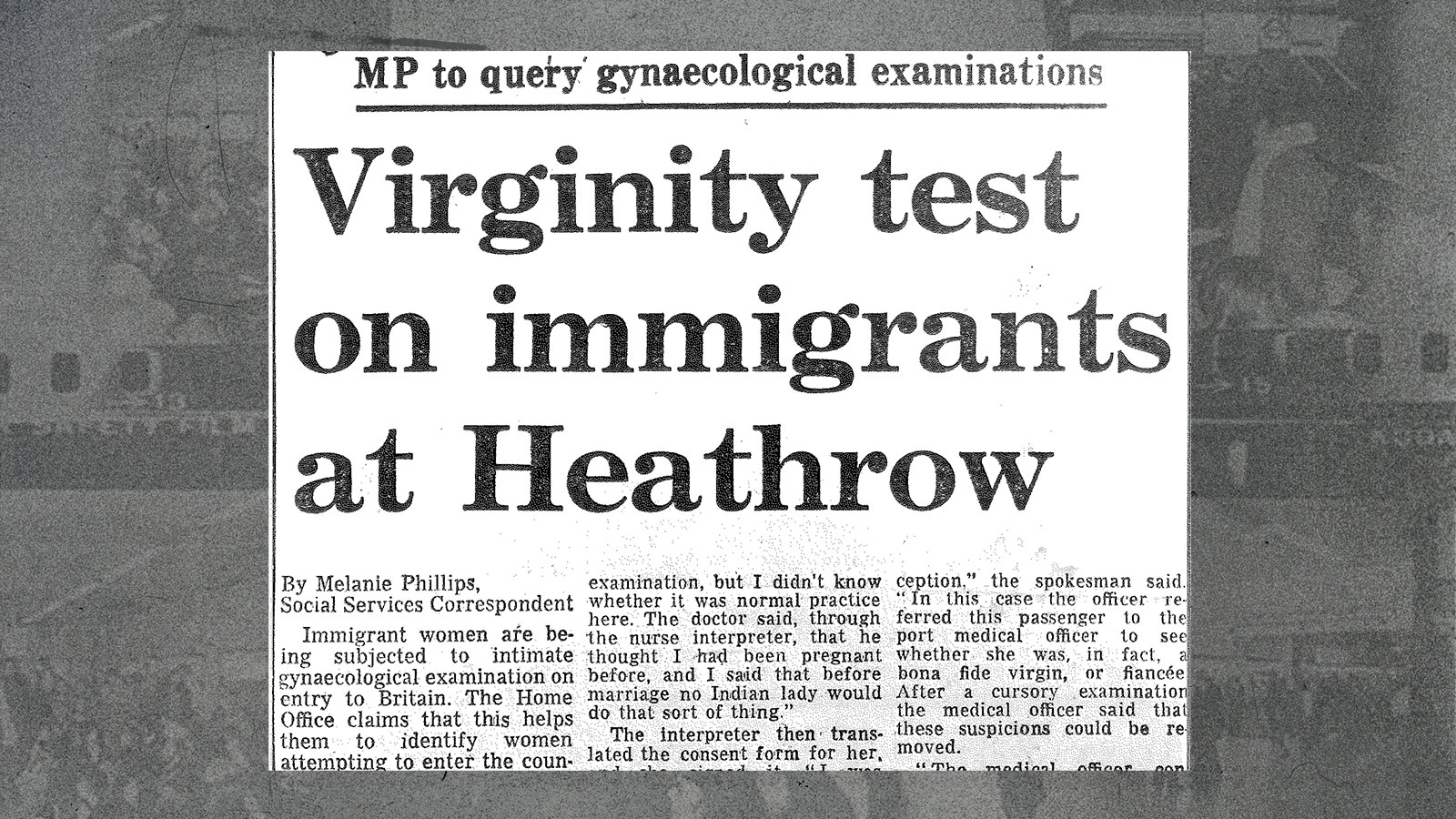 A press clipping from The Guardian, showing the headline of reporter Melanie Phillips’s story that revealed that “immigrant women [were] being subjected to intimate gynaecological examination on entry to Britain.” (Courtesy of Institute of Race Relations, Black History Collection) 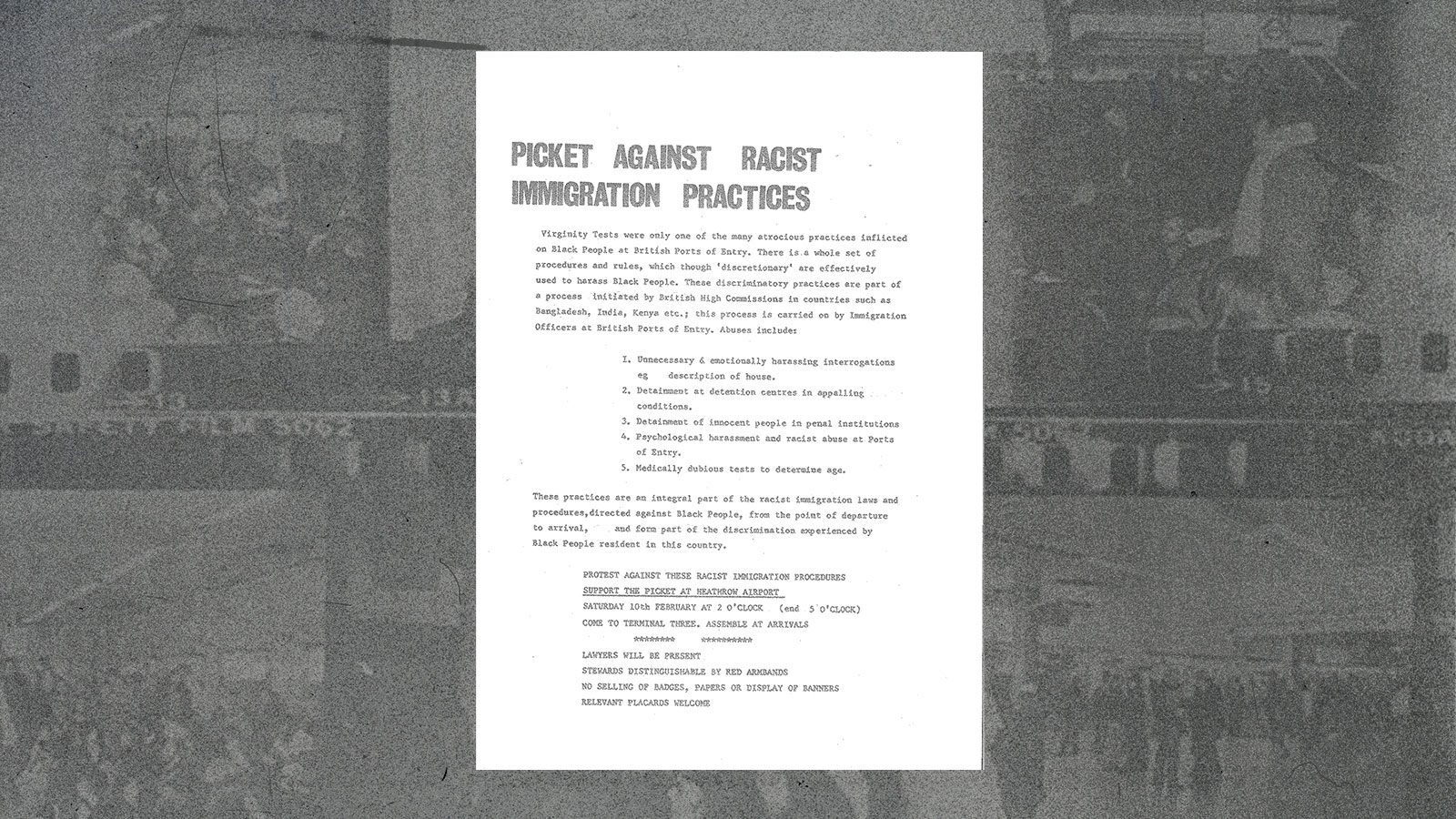 A poster from the time calling people to join a picket against “racist immigration practices.” (Courtesy of Institute of Race Relations, Black History Collection)

The government did itself make its logic for using these procedures known. In March 1979, David Stephen, a Foreign and Commonwealth Office adviser, issued a report  which states: “If immigration or entry certificate officers suspect that a girl claiming to be to be an unmarried dependent is in fact married, or if a woman arriving at London Airport and claiming to be a fiancée of a man resident here is in fact a wife seeking to join her husband and avoid the ‘queue’ for an entry certificate, they have on occasion sought a medical view on whether or not the woman concerned had borne children, it being a reasonable assumption that an unmarried woman in the sub-continent would be a virgin (sic).”

The immigration policy “was a cynical ploy using the patriarchal values of Asian communities against them,” says Rahila Gupta, Interim Director of Southall Black Sisters, one of the groups that campaigned against virginity testing at Heathrow Airport. “I would say it was a form of state rape, which was an invasion of a woman’s privacy of the most appalling kind.”

Sweeping an unsavory history aside

By the end of January 1979, organizations representing various immigrant communities in the UK — notably Awaz (UK Asian women’s collective) and OWAAD (Organization of Women of African and Asian Descent) — began protesting at Heathrow airport and on  the streets of central London.

A wave of disquiet had also swept India following reports of the practice, leading to several protests in New Delhi. Indian author and activist Urvashi Butalia, who was then in her mid-twenties, remembers the civil actions vividly. “My mother Subhadra Butalia, with her feminist group Stree Sangarsh, and lawyer Chandramani Chopra, where at the forefront of the protests. All of us landed up in front of the British Commission in New Delhi shouting slogans. My mother and some others even jumped the gates to enter the High Commission to submit a memorandum seeking to stop the practice.”

The public objection to virginity testing on immigrants triggered a diplomatic response as well, with then Indian Prime Minister, Morarji Desai, writing to the British government led by Labour’s James Callaghan and India’s Deputy-High Commissioner, Pascal Alan Nazareth, reported at the time as having “registered a strong protest” with Evan Luard, the Under-Secretary at the Foreign Office.

Yielding to the growing scrutiny and condemnation, The Home Office issued a statement seen by CNN, dated 2 February 1979. In it, the department admits using virginity testing and confirms that the Home Secretary had now put a stop to the checks.

The practice stopped but the anger remains, fuelled by the lack of accountability.

There has “never been an admission of guilt” by the Home Office, Singh of the Joint Council for Welfare of Immigrants says. “They never admitted that they had done something wrong.”

The Home Office did not acknowledge CNN’s request for comment on the use of virginity testing at UK borders in the 1960s and 70s, nor did it reply when asked if a formal apology was ever made to all those who were subjected to the practice.

Almost 43 years to the day since the protests in the UK and India, Holden, the parliamentarian who proposed the legislation to criminalize virginity testing and hymenoplasty is keen to recognise the positive actions of the state, then and now. “We stopped doing that as a government decades ago, but also now we are ending those practices more widely in society,” he says.

But Rahila Gupta speaks of “the hypocrisy of the British state”, which plans to safeguard vulnerable women today and yet sweeps its “unsavory history aside.”

Read more from the As Equals series

Additional reporting by Ladan Anoushfar. Edited by Meera Senthilingam
A clarification has been added to this story to name more of the organizations active in the virginity testing protests.