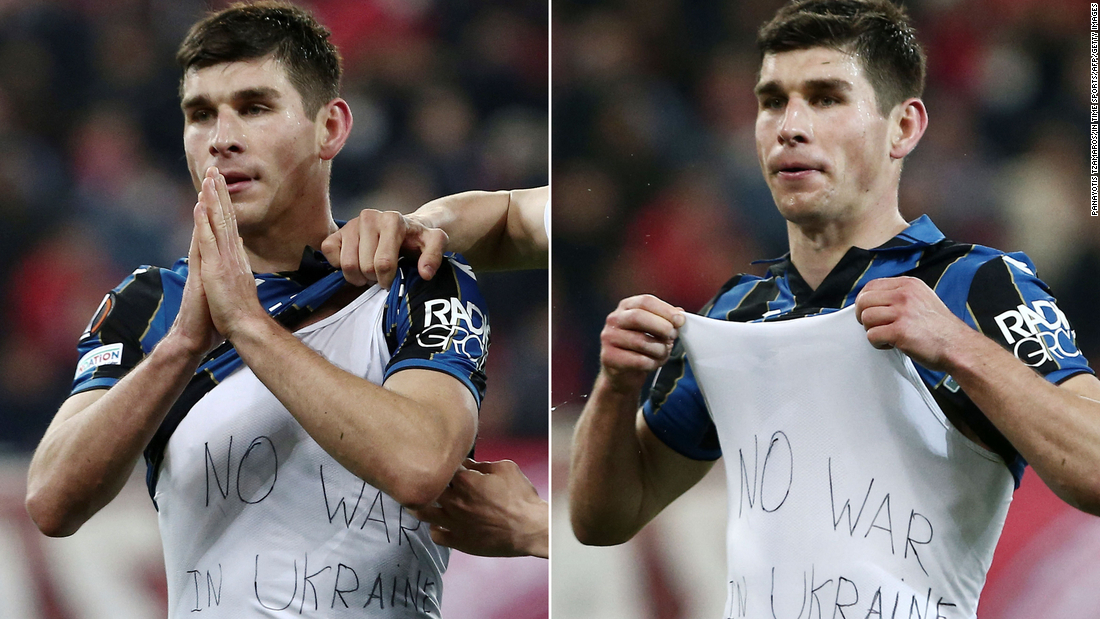 The 2022 final was scheduled to be held at Krestovsky Stadium, which is sponsored by Russian state-owned company Gazprom, but will now be moved to the Stade de France in Paris to be played on the original date of May 28.

“UEFA wishes to express its thanks and appreciation to French Republic President Emmanuel Macron for his personal support and commitment to have European club football’s most prestigious game moved to France at a time of unparalleled crisis,” a statement from UEFA said on Friday.

“Together with the French government, UEFA will fully support multi-stakeholder efforts to ensure the provision of rescue for football players and their families in Ukraine who face dire human suffering, destruction and displacement.”

UEFA added that Russian and Ukrainian clubs still competing in UEFA competitions — the Champions League, the Europa League and the Conference League — will have to play home matches at neutral venues “until further notice.”

“As the governing body of European football, UEFA is working tirelessly to develop and promote football according to common European values such as peace and respect for human rights, in the spirit of the Olympic Charter.

“We remain resolute in our solidarity with the football community in Ukraine and stand ready to extend our hand to the Ukrainian people.”

Meanwhile on Friday, Formula One announced that the Russian Grand Prix, originally scheduled to take place in Sochi on September 23-25, could not be held “in the current circumstances.”

A statement from F1 added: “We are watching the developments in Ukraine with sadness and shock and hope for a swift and peaceful resolution, bringing nations together.”

The decision came after four-time world champion Sebastian Vettel said he wouldn’t race in Russia if the Grand Prix went ahead.

“My own opinion is I should not go, I will not go,” Vettel, who races for Aston Martin, told reporters at a press conference on Thursday, adding: “I’m sorry for the innocent people that are losing their lives, that are getting killed for stupid reasons and a very, very strange and mad leadership.”

Reigning F1 world champion Max Verstappen said that it would not be “correct” to race in a country at war.

“When a country is at war, it’s not correct to race there, that’s for sure,” the Red Bull driver told reporters.

Ukrainian midfielder Ruslan Malinovskyi scored twice for Atalanta in the Europa League on Thursday night, revealing a “No War in Ukraine” shirt under his jersey in celebration of his first goal.

Playing in Greece against Olympiacos hours after his country had been invaded by Russia, Malinovskyi scored the first of two stunning strikes midway through the second half of the knockout stage second leg.

The 28-year-old proceeded to lift his jersey to reveal an undershirt with the anti-war message written on, before adding a second goal mere minutes later with a staggering strike from outside the box.

His brace helped secure a 3-0 victory on the night and a 5-1 aggregate win for the Italian side, who now move into the last 16 of the competition.

Atalanta coach Gian Piero Gasperini said that on the morning of the game he had asked Malinovskyi — who has parents and family in Ukraine — if he had felt ready to play the match.

“We are living in a special moment and for him it is even more so,” Gasperini told Sky Italia.

“This morning, I asked him if he felt like playing because he still has parents and family in Ukraine. I’m happy for this brace.

“Sometimes, football doesn’t solve problems, however, a small contribution can be made to make everyone feel closer: we hope that this thing can be resolved.”

Barcelona and Napoli players joined to display a ‘Stop War’ banner before their Europa League second-leg knockout match in Naples.

Moments before kick-off, the starting players of both teams assembled to hold up a white banner with the message capitalized in red.

“In light of events in Ukraine, we have withdrawn Aeroflot’s sponsorship rights,” Manchester United said on Friday.

“We share the concerns of our fans around the world and extend our sympathies to those affected.”

Meanwhile, German football club FC Schalke 04 says it will remove the Gazprom logo from their jerseys and replace it with the name of the team.

But the club hasn’t revealed whether it is reviewing ties with the state-owned Russian gas giant, which has sponsored the team since 2007.

A seven-time winner of the German first division, Schalke are playing in the second tier this year following relegation from the Bundesliga last season.

Ukrainian footballer Oleksandr Zinchenko, who plays for English Premier League leader Manchester City, took to Instagram on Tuesday to voice his support for Ukrainians amid escalating tensions with Russia.

“The whole civilized world is worried about the situation in my country,” Zinchenko, who has 48 caps for the Ukraine national team, wrote.

“I can’t stand back and [not] put across my point. The country in which I was born and raised. A country whose colors I defend in the international sports arena. A country that we are trying to glorify and develop. A country whose borders must remain intact.

“My country belongs to Ukrainians and no one will ever be able to appropriate it. We will not give up! Glory to Ukraine.”

Ukrainian football icon and the national team’s former manager Andriy Shevchenko is pleading for the world to help his homeland.

The ex-footballer said Ukraine and its people “want peace and territorial integrity. Please I ask you to support our country and call the Russian government to stop their aggression and violation of international law.

“We only want peace. War is not the answer,” Shevchenko added.

Meanwhile, Fyodor Smolov became one of the first Russian footballers to speak out against his country’s invasion of Ukraine on Thursday.

The 32-year-old — capped 45 times by the Russian national team — posted a picture of a black screen on Instagram with a caption that read: “No to war!!!!”

Smolov currently plays with Dynamo Moscow after signing for the Russian Premier League side in January.

On Thursday, the football federations of Poland, Sweden and Czech Republic said their World Cup qualifying games scheduled to take place at the end of March should not be held in Russia.

“The military escalation that we are observing entails serious consequences and considerably lower safety for our national football teams and official delegations,” a statement from the three nations reads.
FIFA on Thursday released a statement saying that it “condemns the use of force by Russia in Ukraine and any type of violence to resolve conflicts.” The statement went on to say that “FIFA calls on all parties to restore peace through constructive dialogue” and that it “continues to express its solidarity to the people affected by this conflict.”

Klitschko brothers to take up arms

Writing from Kyiv, the 45-year-old labeled the Russian invasion as “Putin’s war” and the result of the Russian president’s “megalomania.”

“He [Putin] makes it clear that he wants to destroy the Ukrainian state and the sovereignty of its people,” Klitschko wrote.

“Words are followed by missiles and tanks. Destruction and death come upon us. That’s it, blood will mix with tears.

“We must face reality and have the courage to draw the conclusions for our future and that of our children. This is a blatant violation of international law.”

A Ukrainian Olympic gold medalist at Atlanta in 1996, Klitschko asserted that he and his country “basically do not want this war,” but now rely on Western governments to defend democracy “before it is too late.”

“This war against my country is not only the result of one man’s madness, but also the result of years of weakness in Western democracies.

“This madness must be stopped now by stepping up deterrents. Our governments need to say things loud and clear.”

Vitali Klitschko said he had no choice but to take up arms and fight alongside his brother for his country.

Nicknamed “Dr. Ironfist” during his fighting days and also a former world heavyweight champion, Vitali Klitschko has served as the Mayor of Kyiv since 2014.

“I don’t have another choice, I have to do that. I’ll be fighting,” Vitali Klitschko told British broadcaster ITV on “Good Morning Britain.”

The 50-year-old said that the main objective currently was to support critical infrastructure and ensure the continued supply of basic utilities like gas, water, and heating to Ukrainian citizens.

Meanwhile, the International Olympic Committee (IOC) on Thursday strongly condemned the breach of the Olympic Truce by the Russian government for invading Ukraine.

The Olympic Truce is a resolution adopted by the United Nations General Assembly on December 2, 2021, which, among other things, calls upon all Member States to cooperate with the IOC and the International Paralympic Committee “to use sport as a tool to promote peace, dialogue and reconciliation in areas of conflict during and beyond the period of the Olympic and Paralympic Games.”

The truce went into effect seven days before the February 4 start of the Beijing Winter Olympics and ends seven days after the closing of the Paralympic Games, which are scheduled to conclude on March 13.

On Friday, the IOC urged all sporting federations to relocate or cancel events currently planned to be held in Russia or Belarus in light of the breach of the Olympic Truce.

In recent weeks, Russia has amassed a significant number of troops, vehicles and tanks in Belarus near the border with Ukraine, during which time the two countries have held joint military exercises. On Thursday, troops and military vehicles entered Ukraine via Belarus.