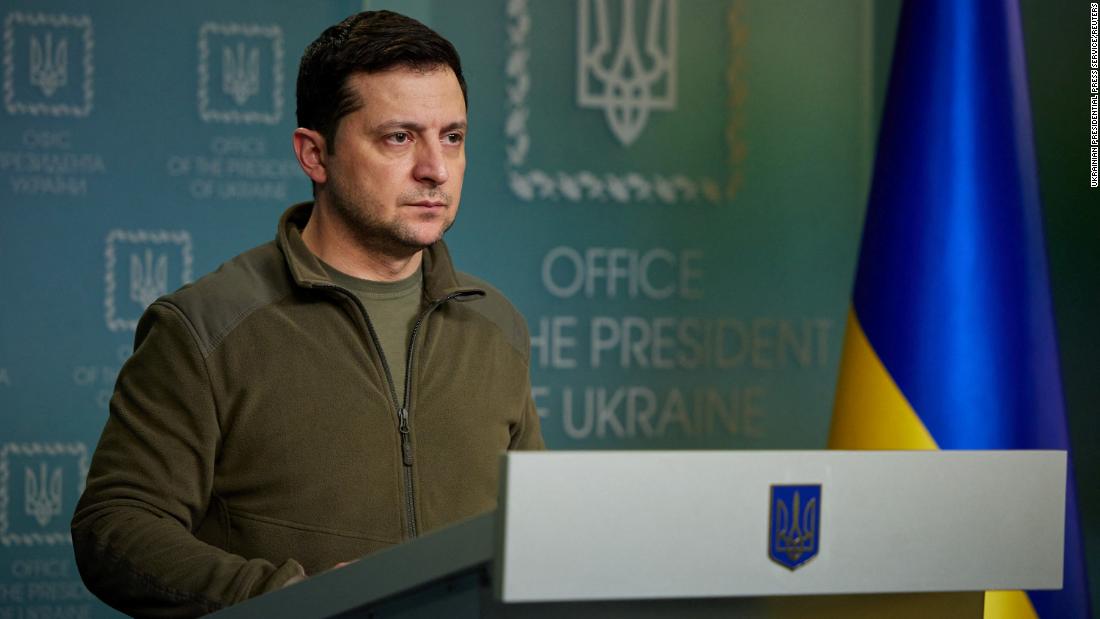 “Today I will start with long-awaited words, which I wish to announce with pride,” he said.

“Finally,” he continued. “Ukraine is United … This is our victory.”

The speech was fiction. It is from the closing scene of “Servant of the People,” a satirical TV show about a down-on-his-luck high-school teacher, played by Zelensky, who is thrust into the Ukrainian presidency after his rant about corruption goes viral.
The series didn’t just make Zelensky a star. It eventually served as the springboard for his real-life presidential campaign. In April 2019, within a month of the show’s finale, the comedian-turned politician was elected Ukraine’s president.
Zelensky again found himself in front of a lectern Friday, but the picture he outlined in the show’s final moments has never felt further away after Russian forces invaded Ukraine Thursday.
The battle for the capital, Kyiv, continued to rage Friday. Explosions lit up the sky as the Kremlin targeted the city with missile strikes before dawn, forcing people into air raid shelters.
In his Friday morning televised address, Zelensky was again a man in character, this time playing David to Russian President Vladimir Putin’s Goliath. In a dark green tee shirt with dark circles under his eyes, the Ukrainian president struck a defiant tone and praised the country’s armed forces for “brilliantly defending the country.”

“Now is an important moment,” Zelensky said. “The fate of our country is being decided.”

‘This gang of drug addicts and neo-Nazis’

Russia’s full-scale invasion of Ukraine began early Thursday. Moscow’s forces attacked by land, sea and air, prompting a barrage of international condemnation and sanctions — and questions about Putin’s wider ambitions for Ukraine and its capital.

Putin framed the “military operation” as a necessary action after the United States and its allies crossed Russia’s “red lines” by expanding NATO eastward.

“There is fighting all over Ukraine now. Let’s sit down at the negotiation table to stop the people’s deaths,” he said in Russian.

Kremlin spokesman Dmitry Peskov said on Friday that Russia was ready to take part in talks in Minsk, according to reporting by Russian state news agency RIA-Novosti. An adviser to Zelensky told CNN that Kyiv is considering the proposal.

Ukraine’s democratically elected government remains intact, but Putin has made it clear this week that he does not see Ukraine as a legitimate sovereign state. On Friday he called on Ukrainians to overthrow Zelensky themselves.

“Take power into your own hands,” Putin said. “It looks like it will be easier for us to come to an agreement (with you) than with this gang of drug addicts and neo-Nazis that has settled in Kyiv and taken hostage the entire Ukrainian people.”

Putin and his government have repeatedly put forward baseless and inaccurate claims that the democratically elected Ukrainian government is a “fascist” or “Nazi” regime. Zelensky is Jewish and had family members die in the Holocaust.
Putin’s comments are unlikely to spur any sort of Ukrainian uprising. Many of Kyiv’s residents have left the city, and those that remain are unlikely to support him, considering Ukraine’s last pro-Russian leader was ousted in a popular uprising in 2014.
Zelensky was elected five years later, thrashing incumbent Petro Poroshenko, but his tenure has been rocky. The first several months of his term were engulfed by the quid-pro-quo scandal which saw former US President Donald Trump’s attempt to exert pressure on Ukraine to dig up dirt on election opponent and now-President Joe Biden and his son Hunter.

Covid-19 then tore through the country. Zelensky’s campaign promises, such as ending the war in eastern Ukraine and stamping out corruption, remain unfilled.

But the danger Zelensky faces is no longer just political.

US officials warned lawmakers that Russian forces who entered Ukraine through Belarus were about 20 miles away from Kyiv, sources told CNN.

And intelligence officials in Washington are concerned the city could fall under Russian control within days. State Department spokesman Ned Price said Zelensky remains a “prime target for Russian aggression,” while Zelensky himself said Russia had marked him as their “number one target.”

“They want to destroy Ukraine politically by destroying the head of state,” he said.