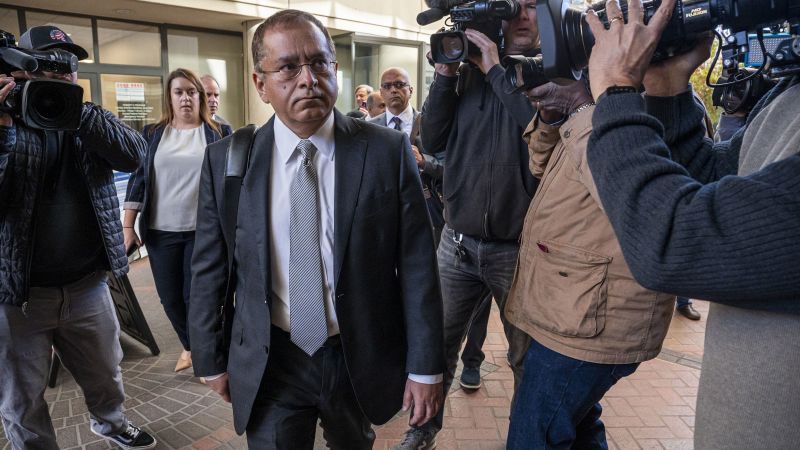 Ramesh “Sunny” Balwani, the former chief operating officer of failed blood testing startup Theranos, was sentenced Wednesday to nearly 13 years in prison for fraud. It marks an end to the stunning downfall of a high-flying Silicon Valley company that resulted in the rare convictions of two tech executives.

“There is an unfortunate saying in Silicon Valley: ‘Fake it ‘til you make it.’ Elizabeth Holmes and Sunny Balwani stretched this idea to a place much farther than the law allows and in so doing put vast amounts of investor dollars at risk,” said Stephanie Hinds, US Attorney for the Northern District of California, in a statement. “Significantly, today the court also made clear that Sunny Balwani’s decision to deceive doctors and patients also put the health of patients at risk. Ms. Holmes and Mr. Balwani now will be justly punished for their illegal conduct.”

Hinds added, “Let this story be a cautionary tale for entrepreneurs in this district: Those who use lies to cover up the shortfalls of their promised accomplishments risk substantial jail time.”

The sentencing comes weeks after Elizabeth Holmes, the founder of Theranos and Balwani’s ex-girlfriend, was sentenced to more than 11 years in prison.

Theranos raised $945 million from an A-list cohort of investors with its promise to test for a wide range of conditions using just a few drops of blood. At its peak, the company was valued at $9 billion.

The company began to unravel after a Wall Street Journal investigation in 2015 reported that Theranos had only ever performed roughly a dozen of the hundreds of tests it offered using its proprietary technology, and with questionable accuracy. It also came to light that Theranos was relying on third-party manufactured devices from traditional blood testing companies rather than its own technology. Theranos ultimately dissolved in September 2018.

Holmes and Balwani were first indicted together four years ago on the same 12 criminal charges pertaining to defrauding investors and patients about Theranos’ capabilities and business dealings in order to get money. Their trials were severed after Holmes indicated she intended to accuse Balwani of sexually, emotionally and psychologically abusing her throughout their decade-long relationship, which coincided with her time running the company. (Balwani’s attorneys have denied her claims.)

In July, Balwani was found guilty on all 12 charges he faced, which included ten counts of federal wire fraud and two counts of conspiracy to commit wire fraud. Holmes was found guilty in January on four charges relating to defrauding investors, and found not guilty on three additional charges concerning defrauding patients and one charge of conspiracy to defraud patients.

Like Holmes, Balwani faced up to 20 years in prison as well as a fine of $250,000 plus restitution for each count.

In a recent court filing, prosecutors noted that Balwani was convicted not only of defrauding investors but also defrauding patients. They recommended a 15-year prison sentence for him, as well as an order for Balwani to pay $804 million in restitution. In a separate filing, attorneys for Balwani requested a sentence of probation, noting he had no criminal history.

Before joining Theranos, Balwani had a career as a software executive. Balwani, nearly 20 years older than Holmes, first met her in 2002 before she dropped out of Stanford. He served as an informal adviser to Holmes in Theranos’ earliest days and the two became romantically involved. Balwani guaranteed a “multimillion-dollar loan” to the startup in 2009, court filings show, and took on a formal role as president and chief operating officer. Holmes and Balwani largely kept their romantic relationship hidden while working together.

During her trial, Holmes claimed Balwani tried to control nearly every aspect of her life — including disciplining her eating, her voice and image, and isolating her from others. She testified that while he didn’t control her interactions with investors, business partners and others, “he impacted everything about who I was, and I don’t fully understand that.”

Holmes is expected to appeal her conviction but was ordered to turn herself into custody on April 27, 2023.