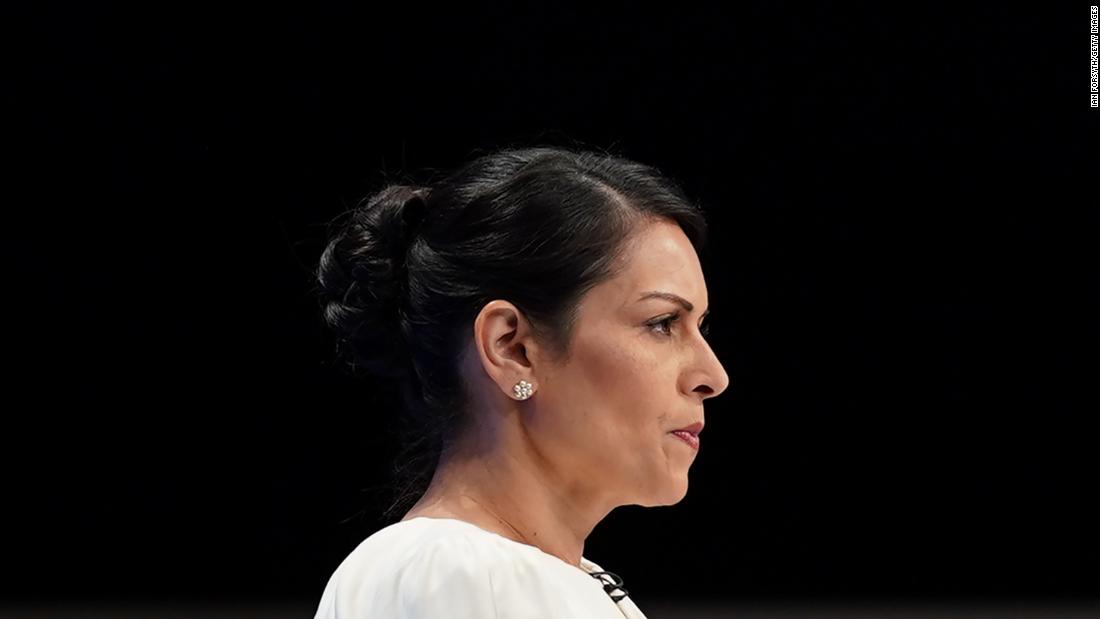 On the issue of immigration — and on Brexit, social justice, law and order and far more besides — her name serves as a Rorschach test for a divided society, reflecting acclaim and anger from each side of the nation’s cultural schism.

To her admirers on the right, she is a steadfast flagbearer for Brexit Britain; a principled patriot who, as a state school-educated daughter of Indian immigrants, is uniquely placed to move the Conservative Party away from its decades-old reputation as elitist and out of touch with the multicultural country it governs.

But to others, Patel is an unsubstantive ideologue who has failed to live up to her own uncompromising rhetoric; a central character in Britain’s untiring culture wars, once sacked for misleading her Prime Minister and investigated for bullying her staff, who remains politically bulletproof thanks not to her skills but her resolute commitment to Johnson’s populist project.

“She knows how to press the buttons of her supporters and of her opponents,” Tim Bale, a professor of politics at Queen Mary University and the author of books on the Conservative Party and the rise of populism in Europe, told CNN.

“In some ways, she symbolizes the polarization she’s trying to create.”

Few politicians take on the job of home secretary with the expectation that they will be liked.

The Home Office, which tackles migration, policing, terrorism and other elements of national security, “covers a lot of the most divisive briefs in politics — and quite a number of occupants have become divisive figures,” Rob Ford, a politics professor at Manchester University and the author of several books on British politics, told CNN.

But Patel has shown a willingness to pick battles over unpopular pillars of politics. Wednesday’s Channel tragedy places a spotlight once again on an issue with which she has become synonymous: illegal migration into Britain, and more widely, the government’s treatment of migrants, asylum-seekers and foreign nationals who seek to relocate in the UK.

“She speaks the language of the socially conservative right very fluently,” Ford said. “It’s not the first language of Boris Johnson,” but Patel’s “nationalistic, threat-focused, sometimes authoritarian worldview” has endeared her to large segments of the Conservative grassroots, he said.

Human rights lawyer Shoaib M. Khan accused her of “repeating dangerous myths” about asylum seekers. Last month, when it was reported that Patel is planning a purpose-built reception center for migrants that would require them to follow strict rules, Khan added: “I could ask this about every single Priti Patel plan, but what possible purpose can this serve?”

Patel said on Wednesday that the disaster “serves as the starkest possible reminder of the dangers of these Channel crossings organized by ruthless criminal gangs.” In Parliament on Thursday, she said there is “no quick fix” to the issue of illegal migration, calling the incident “a dreadful shock” but “not a surprise.”

French Interior Minister Gerald Darmanin on Friday revoked his invitation for Patel to join a meeting in Calais on Friday, after Johnson wrote and released to the media a letter to French President Emmanuel Macron calling on him to take back migrants who travel to the UK by boat.

Patel has frequently vowed fresh crackdowns on such journeys, and has touted Brexit as an opportunity to take control of migration into Britain. In late 2019, she pledged with French ministers to reduce Channel crossings by half in a matter of months, and make them an “infrequent phenomenon” by the end of 2020.

But they have instead increased on her watch; more than 25,000 people have arrived by boat this year, according to Home Office figures, three times more than in 2020. And whether Britain is inside or outside the EU, it remains the endpoint of a long and complex migration route through Europe over which Patel has little control.

Politically speaking, some wonder whether it even matters. “A forever war on immigration is functional for the government,” Bale said. “If you can’t do very much about it, why not have someone in there who carries the message and winds up your opponents?”

But polls show immigration has decreased as a priority among the public in recent years — and failing to deliver on promises could leave Johnson’s government outflanked on immigration issues by populist rivals.

That sentiment is already seeping into her own party. John Hayes, a Conservative backbencher, told Patel in the House of Commons on Thursday: People who voted to take back control have every right to ask the question: “If you cannot protect the integrity of the borders, what can you control?”

“The danger is that If you increase the salience of the issue, and you’re completely unsuccessful in managing it, you can create a real problem in expectations,” Bale said. “I think Patel risks doing exactly the same.”

A chequered political past

Patel arrived at the Home Office as a rising star within Conservative ranks, but her reputation had already been bruised by scandal.

In 2017, then-Prime Minister Theresa May sacked her as secretary of state for international development after discovering she had met senior Israel officials in secret, a severe breach of diplomatic protocol.
Then, last year, an investigation into claims Patel had bullied staff found that she did not “(treat) her civil servants with consideration and respect,” and had committed “behaviour that can be described as bullying.”

“In the civil service, that is not the sort of thing that is going to enhance her reputation,” said Alex Thomas, a program director at the Institute for Government think tank, and a former high-ranking civil servant and principal private secretary to Jeremy Heywood, the cabinet secretary.

“That leaves an imprint,” he said. “Some (civil servants) have worked well with her … but there are others for whom that leaves a long shadow.”

The report came after a public spat and the resignation of Patel’s permanent secretary, but Patel ultimately maintained the backing of Johnson. “There aren’t that many politicians who would get away with that, which suggests she has a special place in (Johnson’s) strategy, or even his heart,” Bale said.

Patel inherited a Home Office dogged by a long-running affair of its own — the Windrush scandal, which exposed hostile immigration crackdowns against a generation of people invited to move to Britain from the Caribbean in the 1940s and 1950s.

The outrage that followed claimed the career of then-Home Secretary Amber Rudd and tarnished May’s own reputation. Patel has pledged to learn lessons from the scandal, which occurred before she took the post, but critics say she has done little to change attitudes and refused to prioritize reform at the department.

Instead, she was accused of “deeply insulting” behavior by victims of the Windrush scandal last year, after she wrote in a newspaper column that “do-gooding celebrities” were attempting to stop deportation flights from Britain.

Her intractable approach sparks continuous criticism from opposition benches. Last year, when it was reported Patel considered a proposal to send asylum-seekers to the British territories of Ascension Island and St. Helena in the Atlantic Ocean, thousands of miles away from the UK, Labour’s shadow home secretary Nick Thomas-Symonds called the idea “ludicrous” and “inhumane.”

And there is little evidence that views of her office have evolved since she took the helm. On Wednesday, a report by MPs found that a compensation scheme set up in the wake of the scandal has paid out on just 5% of potential claims. A previous report by lawmakers in July warned the Home Office’s ill-thought out scheme risked “failing (Windrush victims) again.”
And a CNN/Savanta ComRes poll found last year that most Black Britons don’t trust the government to prevent another Windrush-type scandal, and that most consider the Conservative Party institutionally racist.

A Home Office spokesperson told CNN: “The Home Secretary and the department remain steadfast in our commitment to ensure that members of the Windrush generation receive every penny of compensation that they are entitled to. The Home Secretary overhauled the Scheme in December to ensure more money is paid more quickly — since then the amount of compensation paid has risen from less than £3 million to over £31.6 million, with a further £5.6 million having been offered.”

For all the political battles she has survived, Patel seems to most fondly relish an opportunity to goad the faultlines in Britain’s social conversation.

Those tendencies have translated into legislation; Patel pushed a controversial policing bill that gives officers sweeping powers to stamp out protests.

“She has a following of the grassroots, and she winds opponents of the party up so that they engage in the culture wars that they’re probably best leaving well alone,” Bale said.

“She is a genuine culture warrior,” he added.” I think many in the government indulge in that kind of thing because they think it works for the party — but I think Priti Patel actually believes that a lot of British institutions are full of woke snowflakes that don’t represent ordinary people.”

There have been times when Patel’s reflexive opposition to social issues have put her out of step with the nation at large.

When a section of English football fans booed the national team’s players for taking a knee before games — an anti-racism gesture that has been adopted across the game in the past year — Patel stood by the supporters, and dismissed the knee as “gesture politics” in an interview with GB News.

But weeks later, once England’s advance to the later rounds of the competition had drawn in a captivated nation, Patel was posting pictures of herself cheering the team at a TV screen, draped in an England shirt. She was condemned by the team’s center-back Tyrone Mings soon after for “stoking the fire” of racism in football.

Nonetheless, some argue that Patel’s background makes her a particularly effective flag-bearer for the Conservatives’ broader social agenda.

“She can bring a perspective to the table (that) takes the conversation in a slightly different direction,” Ford said. He noted the typical claims by opponents on the left that the Conservative Party pursues racist policies, adding: “Those lines just don’t land as effectively when they’re directed as an ethnic minority women, and indeed they can backfire.”

Patel’s name continues to be listed among potential Conservative leaders, and her status as a grassroots firebrand would likely help in any leadership election for control of the party. But, as a politician who has rarely been far from scandal, division and social debate, it is unlikely she will try to shed her schismatic political style.

“That’s her brand,” said Thomas. “And she’s leaning into it.”