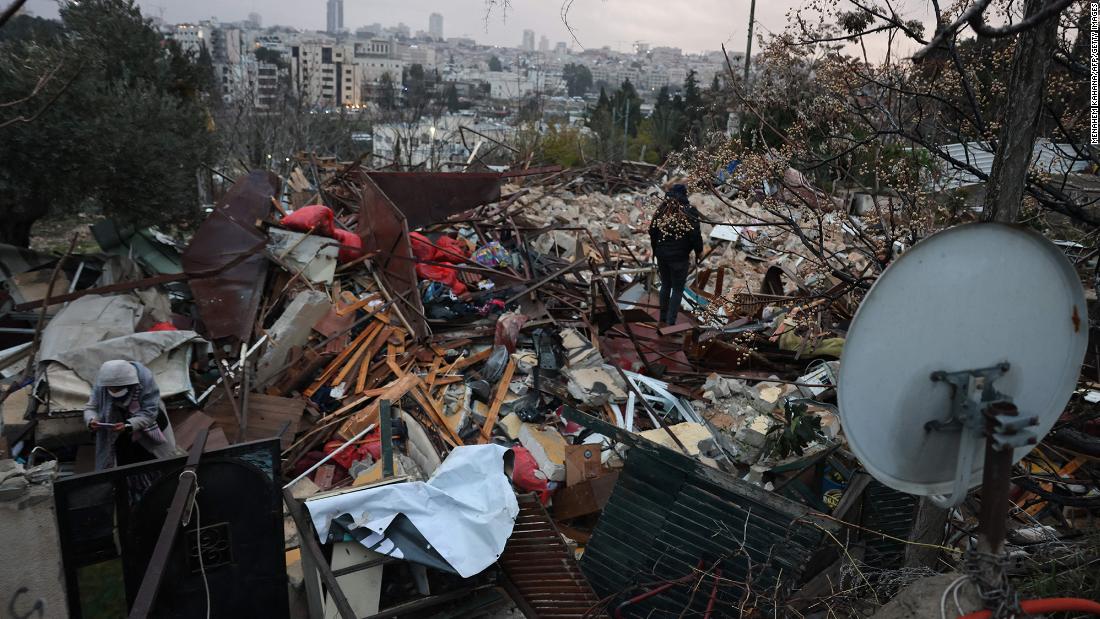 The Jerusalem municipality said the eviction had been carried out following district court approval and would mean a school for local children with special needs could be built on the site.

The large operation began on Monday when Israeli police and municipality workers, backed up by dozens of heavily armed Israeli special forces, moved in with a bulldozer and other heavy machinery.

A metal and glass structure housing a nursery selling plants was demolished while the family, along with supporters, stood on the roof their house in a show of defiance.

At one point, family patriarch Mahmoud Salhiyeh threatened to set light to a gas canister and burn down the house, where he lived with his wife and five children.

The eviction operation appeared to have been halted Monday evening, before being resumed in the early hours of Wednesday with the family’s removal, and the destruction of the remaining buildings on the site.

“They arrived around three o’clock in the morning, cut the electricity and surrounded the house, raiding it and detaining all members who were in the house,” an eyewitness told CNN.

In a statement, the Jerusalem municipality said that “a number of people were arrested for questioning on suspicion of violating a court order, violent fortification and disturbing public order.”

“Since the evacuation order was issued in 2017, members of the family living in the illegal buildings were given countless opportunities to hand over the land with consent, but unfortunately they refused to do so, even after meetings and repeated dialog attempts by the Jerusalem municipality,” the statement added.

Sheikh Jarrah is one of several neighborhoods in East Jerusalem where buildings housing Palestinian families and businesses face the threat of demolition or evacuation.

In some cases, authorities say the buildings were illegally constructed or face expropriation orders. In others, the ownership of the land is challenged by Jewish organizations in decades-long court cases.

The threat of what appeared to be imminent expulsion for several families living less than 200 meters away from the Salhiyeh family triggered weeks of protests last spring and was followed soon after by an 11-day war between militants in Gaza and the Israeli army.

In those Sheikh Jarrah cases, which are separate from the Salhiyeh family case, the houses are built on land handed over to the families in the 1950s by Jordan, which had control of the eastern part of the city between 1948 and 1967.

Jewish groups in those cases say the land was originally theirs and are using an Israeli restitution law that allows them to get it back. Palestinians who lost homes in the fighting that accompanied the establishment of the state of Israel in 1948 do not enjoy the same legal recourse.

Beyond the individual legal contexts that tend to characterize the different cases, the issue of land ownership more generally remains among the most sensitive in the Israeli-Palestinian conflict, and the cases in East Jerusalem are perhaps currently the most sensitive of all.

“The policy of the government and the municipality in East Jerusalem is a policy of expropriation, demolition and arrests, mainly in Sheikh Jarrah and Silwan. The continuous demolition and expulsion of Palestinians from their homes has not stopped since 1967, Ahmad Tibi, an Arab lawmaker in the Israeli parliament, tweeted Wednesday.

The European Union mission in Jerusalem, which led a delegation of diplomats in a show of support for the family Monday, had called on authorities to de-escalate the situation saying such demolitions undermined the prospects for peace.