Nicaragua votes in elections panned as ‘parody’ by international observers 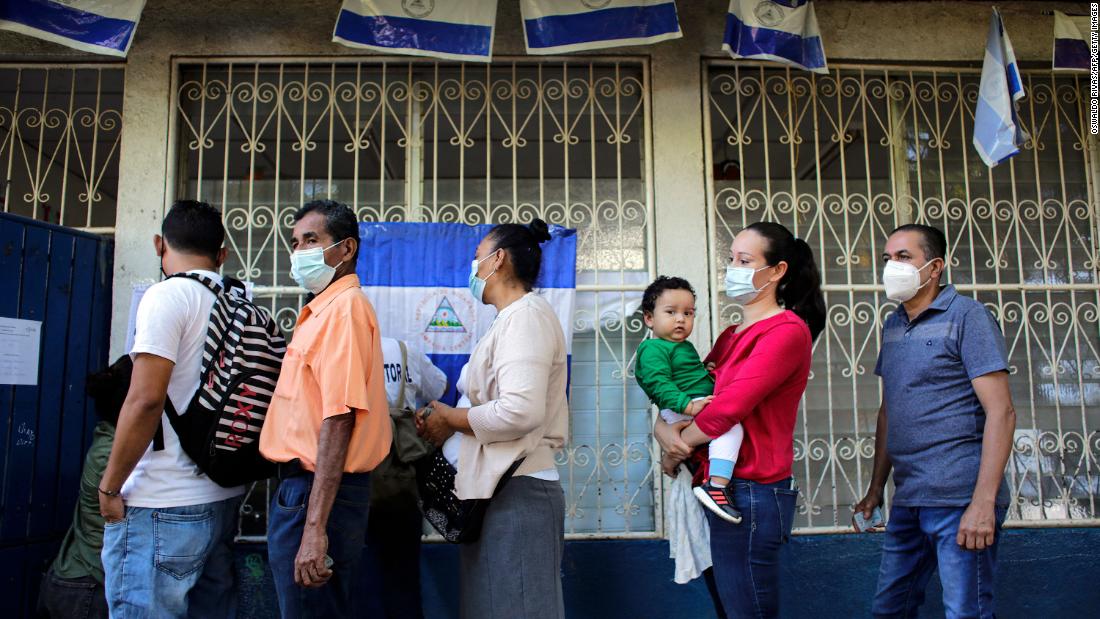 According to Nicaraguan state media, voters turned out across the country to cast their ballots for president and members of the national assembly. “Massive participation in all the municipalities,” reported government-run outlet El 19 Digital, which described long lines conducted in “order, peace and tranquility.”

However, several Nicaraguans interviewed by CNN painted a different picture.

“Going to vote is a joke,” a high-ranking clergy member of the Catholic Church in Nicaragua told CNN by text message. “The people are fearful and locked in their houses.”

“A lot of the people I know are not leaving their homes,” said another Nicaraguan in the city of Granada, asking to remain anonymous for safety reasons. Driving through town, the streets and polling stations he saw were empty, he added.

During a press conference alongside Murillo in the capital Managua on Sunday, Ortega described voter participation as a “vote for peace.”

“We have a right, as Nicaraguans, to open investigations against terrorists and defend the peace,” he also said, apparently defending the dozens of arrests of government critics that had preceded the election.

At least half a dozen likely presidential contenders were detained ahead of the vote, clearing Ortega’s path to another five years in office. Though five other presidential candidates were listed on the final ballot Sunday, none are seen as strong challengers.

Dozens of other prominent critics and opposition leaders were also detained and investigated for alleged national security concerns, according to Nicaraguan law enforcement — moves that much of the international community has criticized as political repression.

Furthering concerns that the deck was stacked in favor of the current President and his party, the Sandinista National Liberation Front (FSLN), the country’s Ortega-aligned electoral council had limited campaigning and the eligibility of political parties — creating what the Organization of American States Secretary General Luis Almagro described in May as “the worst possible circumstances for an electoral process.”
Misinformation and the manipulation of social networks have emerged as another possible contaminant in the electoral process. Facebook last week said it had removed a troll farm of more than 1,000 Facebook and Instagram accounts backed by the government, Reuters reported. The accounts had been working to amplify pro-government content, according to the news agency.
Throughout it all, the specter of Covid-19 has loomed over the vote. Though the country has officially counted fewer than 20,000 cases and just 209 deaths since the start of the pandemic, health experts say the reality could be more severe than reported. According to the Pan American Health Organization, less than 20% of Nicaragua’s population has been vaccinated.

‘A parody of an election’

The Ortega government’s tactics to stifle competition have prompted condemnation from democratic governments and members of the Nicaraguan diaspora around the world.

“What Nicaraguan President Daniel Ortega and his wife, Vice President Rosario Murillo, orchestrated today was a pantomime election that was neither free nor fair, and most certainly not democratic,” US President Joe Biden said in a statement Sunday that called on the ruling pair to release detained political dissidents.

At a protest in the Costa Rican capital San José, dozens of demonstrators dressed up as clowns to indicate their claim the elections in Nicaragua were a “circus.” “This is fraud. I’m dressed as a clown because this vote is a joke,” one female protester, who did not identify herself due to fear of repercussions, told CNN en Español.

In Miami, Florida, protesters carried blue and white Nicaraguan flags and signs reading “no to electoral fraud” in Ruben Dario Park, named after the Nicaraguan poet.

And in Madrid, Spain, protesters gathered outside the country’s congressional building carrying a large sign reading “Nicaragua: justice and liberty,” demanding the results of the vote be rejected.

Regional governments have long voiced concern over the Ortega regime’s crackdown over the past year. Following a wave of arrests this summer, Mexico and Argentina recalled their ambassadors for consultations, citing “worrying legal actions by the Nicaraguan government.”

At a November 3 meeting about a new report on Nicaragua’s political repression by the Inter-American Commission on Human Rights, US representative Bradley Freden described the Nicaraguan election as “nothing more than a sham.”

“The event that’s about to take place on November 7 is a parody of an election,” echoed Canadian representative Hugh Adsett.

A day earlier, on November 2, the European Union’s chief diplomat, Josep Borrell, described Nicaragua’s election as so “completely fake” that it would not be worth sending independent observers.

“We are not going to send any electoral observation mission there because Mr. Ortega has taken care to imprison all the political contenders who have stood in these elections,” Borrell said, speaking in Lima, Peru.

Both the European Union and United States have imposed sanctions on senior Nicaraguan officials, including members of the Ortega-Murillo family. The United States is also poised to levy further punitive financial measures after Sunday’s vote.

Ortega came to power as part of the Sandinista rebels who overthrew the Somoza dynasty in 1979, and fought against the US-backed Contras during the 1980s. First elected in 1985, he has since demolished Nicaragua’s presidential term limits, allowing him to run over and over again.

Increasingly, however, Ortega has retreated from the public eye, with weeks and even months passing between appearances. His wife, Rosario Murillo, is now the recognized face and voice of the administration, with an idiosyncratic daily radio broadcast.

Over the years, the pair have inexorably consolidated power, appointing loyalists to top government roles and exerting an increasingly tight grip on the country’s social and political spheres. Local press describe a climate of fear and intimidation.

“They’re fearful of losing their grip on power,” said Julie Chung, the acting Assistant Secretary for the US Department of State’s Bureau of Western Hemisphere Affairs, in June. “As such, that fear of democracy, I think, has contributed to triggering these kinds of actions, repressive actions, because they have no confidence in their own ability to have the people support them.”

Anti-government protests in 2018, sparked by uproar over a plan to pare down the country’s social security programs, offered a striking example of the government’s intolerance for dissent.

Pro-government armed groups arbitrarily detained hundreds of participants, attacked churches and universities where demonstrators were thought to be hiding, and allegedly blocked the injured from accessing medical care.

Hundreds of protesters and activists are believed to still be detained, according to a report by the Nicaraguan Center for Human Rights in February, and more than 100,000 Nicaraguans have fled the country, according to the UN High Commissioner for Refugees.

Anti-government protests were subsequently banned. Even waving the country’s flag in public — a key symbol of the 2018 demonstrations — was criminalized.

“Years ago during elections, there were lines at the polls and people wanted to participate,” she said. Though she had boycotted the vote, she pointed out that others in Nicaragua are not free to do even that, with government employees under particular scrutiny.

“My father works for the state and if he doesn’t vote, he’ll be fired. It’s a way to force people to vote, it’s not voluntary,” she said.

Her only hope is to leave the country, she added. “I don’t see a future here. Unless Daniel Ortega and that woman die, nothing will change. There is no life here.”