Montreux Convention: How a 1936 treaty could force Turkey to take sides in the Ukraine war 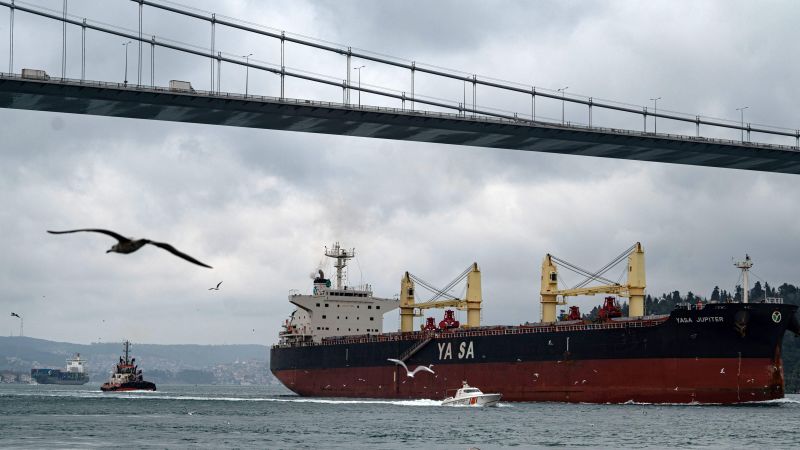 Turkey has officially labeled Russia’s invasion of Ukraine as a war and says it will restrict some warships from passing through key waterways, in a move that experts said could potentially hinder some of Moscow’s military activities in the region.

On Thursday, Russian forces launched a land, sea and air assault on Ukraine in the biggest attack by one state against another in Europe since World War Two.

Ukraine’s ambassador to Turkey Vasyl Bodnar went on local television last week and appealed for the government in Ankara to close its key straits to Russian warships under provisions of the 1936 Montreux Convention. Turkey said it could only do so if it officially recognized the conflict as a war, and on Sunday, that’s what it did.

On Monday, Turkish President Recep Tayyip Erdogan said his government would “use the authority given to our country by the Montreux Convention on ship traffic in the straits in a way that will prevent the crisis from escalating.”

Foreign Minister Mevlut Cavusoglu later said that Turkey had warned both Black Sea and non-Black Sea countries not to pass warships through the Bosphorus and Dardanelles Straits, according to Turkey’s state-run Anadolu news agency.

“There has been no request for passage through the straits [since the war started],” Cavusoglu said.

While Erdogan said he considered “Russia’s attack on Ukraine unacceptable,” he also said Turkey would not abandon its ties with Russia or Ukraine.

Here’s what you need to know.

What is the Montreux Convention?

The convention gives Turkey certain control over the passage of warships from the Dardanelles and Bosphorus Straits that connect the Aegean, Marmara, and Black Sea.

In peace time, warships can pass the straits by prior diplomatic notification with certain limitations on the weight of the ships and arms they carry – and depending on whether the ship belongs to a Black Sea nation or not. And at times of war, Turkey can bar the passage of the warships of belligerent parties from crossing.

According to the convention, if Turkey is a party to the war or considers itself threatened with imminent danger, it can shut down the straits to the passage of warships.

How does this affect Russia?

Both Russia and Ukraine lie on the Black Sea, along with Romania and NATO members Bulgaria and Georgia. Turkey can limit the transit of Russian warships from the Mediterranean to the Black Sea through its straits under the Montreux Convention, but the pact has a caveat: belligerent states’ warships can cross if they are returning to their base of origin.

“If the ship of the war country will return to its port, an exception is made. We will implement all the provisions of Montreux with transparency,” said Turkish Foreign Minister Mevlut Cavusoglu, adding that the exception should not be abused.

The move would only be symbolic, said Mustafa Aydin, president of the International Relations Council of Turkey.

“Russia has enough firepower in the Black Sea that it doesn’t make sense for NATO countries to [enter],” he said. “Russia has complete supremacy on the water.”

But if the war drags on, Moscow may feel the heat, since Russia had already completed its naval buildup in the Black Sea by shifting units from the Baltic Sea ahead of the start of hostilities, said Serhat Guvenc, professor of international relations at Istanbul’s Kadir Has University.

Earlier in February, six Russian warships and a submarine transited the Dardanelles and Bosphorus straits to the Black Sea for what Moscow called naval drills near Ukrainian waters.

“They [Russia] probably have enough resources to sustain their naval power in the Black Sea for about two to three months,” he said. “But if conflict drags on, it’ll be a different story.”

Why did Turkey declare the conflict a war?

Guvenc said he hadn’t expected Turkey to take a decision so soon, but Ukrainian President Volodymyr Zelensky “put Ankara on the spot” by prematurely thanking Turkey on Twitter for its support.

I thank my friend Mr. President of 🇹🇷 @RTErdogan and the people of 🇹🇷 for their strong support. The ban on the passage of 🇷🇺 warships to the Black Sea and significant military and humanitarian support for 🇺🇦 are extremely important today. The people of 🇺🇦 will never forget that!

Turkey has said that it has historically respected the treaty and will continue to do so.

Guvenc said it’s in Ankara’s interest to do so because the treaty supports Turkey at times of war. Any exception made to please Russia could jeopardize the treaty’s credibility in the long run.

“The United States is very interested in the idea of unrestricted freedom of navigation through the Turkish straits, as is the case with other waterways like the Suez and Panama canals,” he said. A deviation from the convention would give the US “a legitimate reason to question Turkey’s status as the watchdog of Montreux.”

How could this affect Turkey’s foreign relations?

Turkey has a maritime border with both Ukraine and Russia on the Black Sea and views both countries as friendly. Ankara relies on Russia for tourism and natural gas but also has close economic and defense ties to Ukraine and has, despite Russian objections, sold drones to the country.

The Soviet Union, the Russian state’s predecessor, was one of the original signatories of the Montreux Convention.

“Russia knows the intricacies of the politics and the law and would have been prepared for such an eventuality,” said Guvenc. Moscow, however, may not have expected Ankara to act on the treaty so soon, he added.

“Turkey can sell this move as purely observing an obligation under international law,” he said, but the move may be an indication of where Turkey may lean if the conflict drags on. “Turkey has decided to align more with its traditional allies in NATO and the European Union, and a bit away from Russia.”

Iran said on Sunday it will not accept any deadline set by the West to revive its 2015 nuclear deal with world powers, and wants what it described as “politically motivated” claims by UN watchdog IAEA about Tehran’s nuclear work to be dropped, Iranian state TV reported.

The United Arab Emirates wants to encourage a political solution for the Ukraine war and taking sides would only encourage violence, a senior UAE official said on Sunday.

The Security Council is due to vote Monday on a proposal by the United Arab Emirates to impose an arms embargo on Yemen’s Houthis after the group claimed several drone and missile assaults on the country this year.

Iraqi archaeological authorities reopened a site at the ancient city of Hatra last week following the partial completion of a renovation project of the site once destroyed by ISIS militants years ago, Reuters reports.

Officials say nearly 15% of the site was destroyed by ISIS militants, who took over large swathes of the country.

Images published online in 2015 allegedly showed what is described as ISIS militants destroying statues and artifacts at the site with sledgehammers and pickaxes.

The renovation project is carried out in cooperation with the Italian International Association for Mediterranean and Oriental Studies (ISMEO). Only 5% of the destruction has been renovated and the rest of the project is underway, officials added.

Hatra, a UNESCO World Heritage site, was among many sites destroyed by ISIS militants in Iraq and Syria, including the 2,700-year-old city of Khorsabad famed for its colossal statues of human-headed winged bulls.

ISIS once ruled a self-declared caliphate in parts of Iraq and Syria which contain some of the richest archaeological treasures on earth, where ancient Assyrian empires built their capitals, Greco-Roman civilization flourished and Muslim and Christian sects co-existed for centuries.