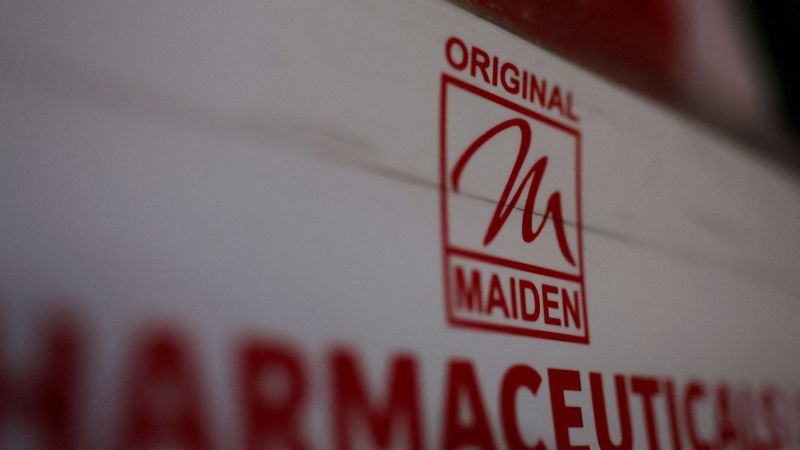 Indian health authorities have halted production at a pharmaceutical company in New Delhi after the World Health Organization (WHO) said its cough and cold syrups may be linked to the deaths of dozens of children.

The WHO suspects that four of the syrups made by Maiden Pharmaceuticals Limited – Promethazine Oral Solution, Kofexmalin Baby Cough Syrup, Makoff Baby Cough Syrup and Magrip N Cold Syrup – have “unacceptable amounts” of chemicals that can damage the brain, lungs, liver and kidneys of those who take them.

On Wednesday, India’s Central Drugs Standard Control Organization said Maiden Pharmaceuticals had been “manufacturing and testing drugs without adhering to, and in contravention of, the various good manufacturing practice requirements.”

“In view of the seriousness of the contraventions observed during the investigation and its potential risk to the quality, safety and efficacy of the drugs being produced, all the manufacturing activities of the firm (are) being stopped with immediate effect,” it said.

The WHO has previously issued an alert regarding the medicines and they have been recalled by the Gambian Medicine Control Agency.

The alarm was first raised by medical officers in the Gambia, after an unusual number of children began dying from kidney problems. The deaths confounded medics until a pattern emerged: dozens of patients younger than five had fallen ill three to five days after taking a locally sold syrup made by Maiden Pharmaceuticals.

A subsequent analysis by the WHO of the four syrups made by Maiden found them to contain “unacceptable amounts” ​of diethylene glycol and ethylene glycol, which can damage the brain, lungs, liver and kidneys.

CNN has reached out to Maiden Pharmaceuticals Limited, but has not yet heard back.

However, the company has previously published links to the WHO’s medical product alert and the Gambian Medicine Control Agency’s recall notice.

The WHO has also warned that the products may have been distributed to other countries and has recommended they be removed from circulation.

On Wednesday, health authorities in Indonesia said they were investigating cases of “acute kidney injury” in the deaths of more than 20 children in the capital Jakarta and were in talks with WHO experts investigating the cases in the Gambia.

All of the children had consumed Maiden Pharmaceuticals’ cough syrups, authorities added.

Health ministry officials said at least 131 cases of acute kidney injuries had been diagnosed in children across Indonesia this year.

One official told Reuters that the total number of deaths nationwide was “still being determined.”

Indonesia’s Food and Drug Monitoring Agency said this week that the cough syrups had not been registered in the country.