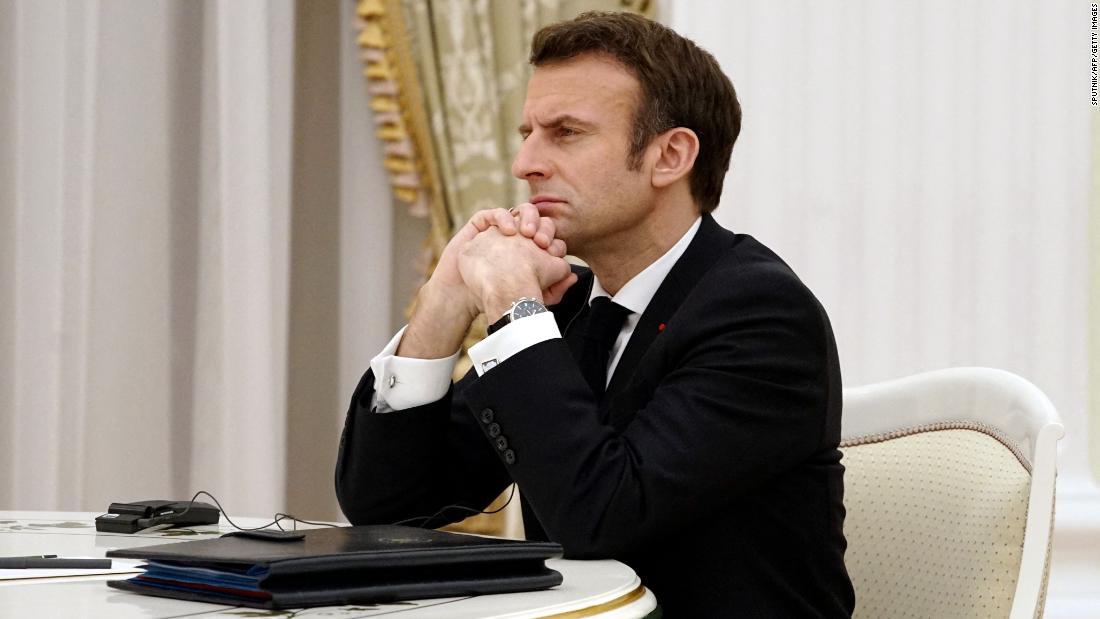 As the United States moves forces to Eastern Europe to support its NATO allies and Russia deploys more troops onto Ukraine’s border, Macron visited his counterpart, President Vladimir Putin, in Moscow on Monday to demand a de-escalation to the crisis, before traveling to Kyiv.

Though the shape of a solution to the showdown is still unclear, and the Kremlin continues to push for security guarantees that the US and NATO have called non-starters, Macron said that he and Putin were beginning to build a “constructive arrangement,” which was “mutually acceptable” to Russia and the rest of Europe to “help us avoid war.”

“This dialogue is absolutely essential, more than ever, to ensure the stability and security of the European continent,” Macron said in remarks aired on Russian state television at a meeting soon after he arrived at the Kremlin.

Putin said the two countries shared “common concern” about the security situation in Europe. “I see how much effort the current leadership of France and personally the president of France are making to resolve the crisis associated with ensuring equal security in Europe,” he added, shorthanding the issue as “the resolution of the intra-Ukrainian crisis,” a phase that casts the conflict in Donbas as a purely internal matter of Ukraine and avoids mention of Russia’s role in it.

Putin has assembled 70% of the military personnel and weapons it would need for a full-scale invasion of Ukraine, based on the latest US intelligence estimates, but US officials say they still don’t know whether Russia’s leader has decided to launch an attack. The Kremlin has repeatedly denied it is planning an incursion, but has argued that NATO support for the country constitutes a growing threat to Russia.
The crunch talks between Putin and Macron came as US President Joe Biden met with German Chancellor Olaf Scholz in Washington, DC on Monday. While the Biden administration has sought to demonstrate a united Western front against Putin’s aggression, Scholz has largely watched from the sidelines as the crisis escalates — drawing criticism and questions over Germany’s willingness to confront Moscow.

Scholz, who succeeded Angela Merkel in December, has taken a softer approach on Russia than the US and its allies. Germany has not joined the US, France, Spain and other allies in bolstering troops along NATO’s eastern flank. It has also been reluctant to provide lethal aid, refusing to allow NATO ally, Estonia, to send German-made howitzers to Ukraine and drawing mockery for sending thousands of helmets instead of weapons.

Some experts have suggested Germany’s contentious Nord Stream 2 pipeline project, which is meant to bring natural gas from Russia to the country, may be the reason why it’s not taking a more prominent role. In an apparent attempt to refute that criticism, Scholz will visit Russia and Ukraine later this month.
As Putin tests the West’s resolve, Macron has thrust himself to center stage, taking Merkel’s place as leading mediator for Europe as he readies himself for a re-election bid at home. Currently at the helm of the European Union’s rotating presidency, Macron has spoken several times per week with Putin, and placed his third phone call in a week to Biden on Sunday evening.

According to a statement from the Elysee Palace, Macron and Biden agreed Sunday to capitalize on the “positive progress” made in the Normandy Format — a grouping of France, Germany, Ukraine and Russia — to bolster the Minsk agreements, a ceasefire protocol signed by Ukraine and Russia in 2015 after Russia annexed Crimea and fomented a rebellion in Ukraine’s east. Despite the agreement, the two sides have not seen a stable peace.

The French president, who in 2019 said bluntly that Europe was facing the “brain death of NATO,” caused by American indifference to the transatlantic alliance, and has called on the EU to take on a larger role in Europe’s defense, is now getting a chance to lay out his vision for what a Europe more independent from US influence might look like.

To Moscow, Macron has presented himself as a “quality interlocutor,” as Putin described him, according to an official in the French presidency. The official told reporters Friday that among Macron’s agenda for the talks was to try to balance “the new order of security in Europe, including guarantees of regional security and the role and capacity of the European Union in taking charge of its own security,” alongside his commitments to the US and NATO.

The stakes could not be higher. Macron is seeking to stop the massive Russian military buildup of more than 100,000 soldiers from bubbling over into war and soothe Russia’s security grievances, which include demands that Ukraine and Georgia be blocked from ever becoming members of the alliance and a drawdown of troops in the region.

“I’m reasonably optimistic but I don’t believe in spontaneous miracles,” Macron told reporters on the flight to the Russian capital, according to CNN affiliate BFM TV, which was traveling with the French president.

Moscow, on the other hand, had been more cautious about the planned meeting. Kremlin spokesperson Dmitry Peskov said earlier on Monday the Russian government had seen “nothing new” in response to its security demands.

CNN’s Joseph Ataman and Camille Knight in Paris contributed to this report.