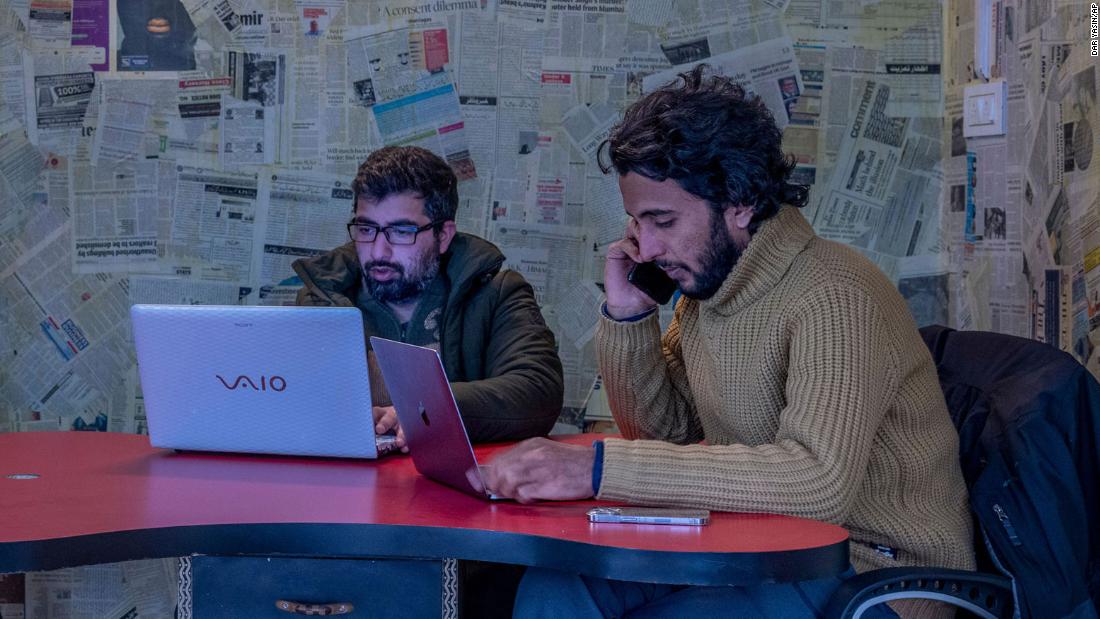 Fahad Shah, founding editor of The Kashmir Walla, was arrested Friday in Pulwama, a city in the Indian-administered part of Kashmir. The contested territory is also in part administered by Pakistan.

According to a statement published by The Kashmir Walla, Shah was summoned by police as part of an investigation into a series of reports the outlet published about a police raid in the area in January 2020.

Shah has not been formally charged. But in a statement Friday, local police in Pulwama accused Shah of being among a group of “Facebook users” who uploaded “anti-national content including photographs, videos and posts with criminal intention to create fear among public.”

The Kashmir Zone Police — the body that polices the entire Kashmir region — said in a Twitter post that Shah was suspected of “glorifying terrorism, spreading fake news and inciting general public.”

CNN Business has reached out to the Kashmir police for comment about Shah’s case, but has not received a response.

Shah’s work has been featured in several international publications including The Guardian, Time and Foreign Policy. He was awarded the 25th Human Rights Press Awards 2021 in explanatory feature writing for his coverage of Delhi communal violence in February 2020, according to The Kashmir Walla.

His case has sparked outrage among media rights organizations in India. Shah’s lawyer, Umair Ronga, said his client was detained under India’s Unlawful Activities Prevention Act (UAPA), an anti-terrorism law that critics say has been misused as a tool to quash dissent or criticism.
“News can be true or concocted but invoking #UAPA for publishing news seems the end of the rule of law,” Ronga wrote in a tweet on Saturday, adding that the arrest was “shocking.” He added that he has filed a bail application on behalf of Shah.

According to Ronga, Shah will be in police custody for 10 days.

After those 10 days, Shah will be brought before a court to decide if he will need to stay in the custody of law enforcement. A person arrested under UAPA can remain in prison for up to six months, without official charges being filed.

If convicted, Shah could face up to seven years in prison.

Shah’s arrest also comes as police crack down on other journalists in Kashmir, which India and Pakistan have been fighting over since both countries gained independence in 1947.

Shah is not the first Kashmir Walla journalist to be arrested this year. Staffer Sajad Gul was arrested in January for criminal conspiracy and criminal intimidation, among other charges, according to Ronga, who is also representing him.

Gul is also being investigated for alleged violations of Kashmir’s Public Safety Act, which allows the state to detain a person for the “security of the State or maintenance of public order” for an extended period of time.

CNN Business has reached out to the Kashmir police for comment about Gul’s case, but has not received a response.

The Kashmir Walla said it “stands in solidarity with Shah” and “remains committed to providing reliable and on-ground reporting from Kashmir.”

It appealed to the administration “for the immediate release of Shah and Gul.”

“We hope both of them will join us back in the newsroom soon,” the statement said.

On Monday, an Indian court asked Kashmir freelance journalist Gowhar Nazir Geelani to appear before it for allegedly sharing information on social media about a militant attack on a policeman, Reuters reported.

The court was acting on a police complaint, Reuters added.

An outcry over press freedoms

News of Shah’s arrest has sent shockwaves through the country’s media industry.

The Editors Guild of India said in a Sunday statement it “strongly condemns” the arrest, and urged authorities to ensure that “intimidatory questioning, and wrongful detainment are not used as tools for suppressing press freedom.”

The Committee to Protect Journalists also called for Shah’s release.

“The arrest of Fahad Shah shows Jammu and Kashmir authorities’ utter disregard for press freedom and the fundamental right of journalists to report freely and safely,” said Steven Butler, the organization’s Asia program coordinator, in a Saturday statement. “Authorities must immediately release Shah, and all other journalists behind bars, and cease detaining and harassing journalists for simply doing their jobs.”

The UAPA was enacted in 1967. But India has seen a spike in arrests that invoke the law since the ruling Bharatiya Janata Party government came to power in 2014, according to data from the Ministry of Home Affairs.

Reporters Without Borders has called India “one of the world’s most dangerous countries for journalists.” The organization ranked the country 142 out of 180 in its 2021 press freedom index.

The report emphasized particular concern over worsening conditions for reporters in Kashmir.

“The situation is still very worrying in Kashmir,” the report said. “Reporters are often harassed by police and paramilitaries and must cope with utterly Orwellian content regulations, and where media outlets are liable to be closed.”