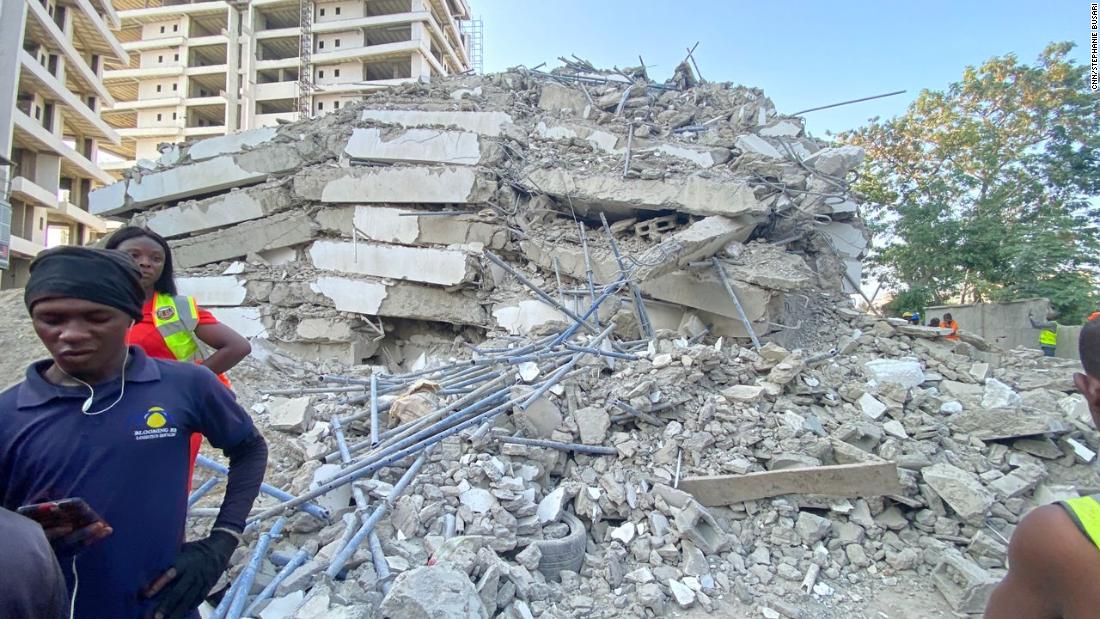 The building, located on Gerald Road in the city’s affluent Ikoyi neighborhood, is a construction site for luxury apartments. It is unclear how many people were inside when it fell.

“I thought it was an earthquake when I rushed out of my apartment just after 3 p.m. I felt the building move and knew something was wrong,” Olu Apata, a nearby resident and the president of the Nigerian Bar Association, told CNN.

Apata said the building has been under construction for the past two years and that the developer was at the site meeting with prospective buyers earlier on Monday.

Three people have since been rescued from the collapse, according to a statement from the Lagos State government, which added that the city’s rescue unit, fire service and ambulance service was on the scene.

The statement did not indicate how many people are currently missing.

The investigation into the cause of the collapse is ongoing, and officials on the ground are evaluating possible damage to the surrounding structures, the statement said.

Muhammad, a civil servant, told CNN he was in his office next door when the high rise came down. “We just heard an unusual loud sound from our office building and the building we’re occupying was vibrating. So, I looked through the window, only to see the building collapsing floor after floor. And of course, we all ran to safety.”

It took a while for rescue services to arrive at the scene. Hours after the collapse, hundreds of people were milling around the site, helplessly surveying slabs of concrete piled high in a heap. Locals were digging through the wreckage by hand.

Some in the crowd were furious that an official emergency response had not started.

Instead, rescue efforts were being carried out by passersby such as Rashid Olamilekan, who told CNN he had pulled three construction workers from the rubble. “I am a Nigerian. I have to rescue my people,” he said. The rescued workers had been taken to the hospital, Olamilekan added.

The Nigerian Red Cross were also there.

Building collapses are not uncommon occurrences in Lagos, Nigeria’s largest city with a population of around 20 million people.

In 2019, the collapse of two separate buildings, including one housing a school, left dozens of people dead.

An expert told CNN at the time that more than 1,000 buildings were at risk of collapsing in Lagos.