Kazakhstan leader gives ‘kill without warning’ order, as bodies lie in the streets 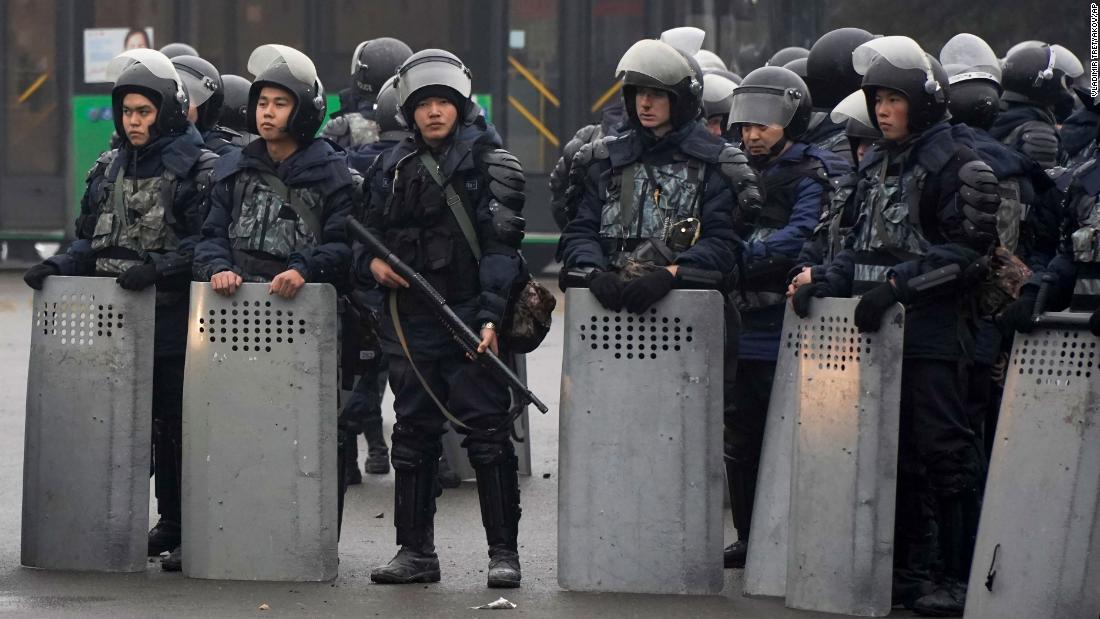 In a defiant public address Friday, Tokayev claimed the unrest, which began earlier this week as protests against rising fuel prices, had been masterminded by well-trained “terrorist bandits” from both inside and outside the country.

More than 3,800 people have been detained so far, Kazakh state media reported Friday, citing the country’s Internal Affairs Ministry. More than 100 people were arrested while carrying out “terrorist actions,” the state media added.

In Almaty, the country’s largest city, several dead bodies riddled with bullets lay in the streets and the air was repeatedly filled with gunfire, according to a journalist in the area.

An internet outage has knocked out ATM machines and at least one gun store appeared to have been ransacked, said the journalist, whom CNN has agreed not to name over fears for their safety.

Tokayev said the situation had “stabilized” in Almaty, and that the “introduction of a state of emergency is yielding results.”

“But terrorists continue to damage state and private property and use weapons against citizens,” he said. “I gave the order to law enforcement agencies and the army to open fire to kill without warning.”

Tokayev doubled down on that rhetoric on Twitter later, writing 20,000 “gangsters and terrorists” were involved in at least “six waves of attacks” in Almaty this week and added: “No talks with the terrorists, we must kill them.”

The government ​has control over the center of Almaty near the president’s residence and mayor’s office, and three large military checkpoints have been set up, the journalist told CNN. If anyone goes near the checkpoints, military forces shoot into the air. It is not clear whether they are shooting live or rubber rounds, the journalist said.

Tokayev’s speech attempted to undermine the narrative that the demonstrations were a product of popular unrest that turned increasingly destructive and deadly. He said the violence was the product of a well-organized enemy, armed with sleeper cells carrying out “terrorist attacks” and “specialists trained in ideological sabotage, skillfully using disinformation or ‘fakes’ and capable of manipulating people’s moods.”

“Their actions showed the presence of a clear plan of attacks on military, administrative and social facilities in almost all areas, coherent coordination of actions, high combat readiness and bestial cruelty,” Tokayev said. “They need to be destroyed.”

However, several protesters who spoke to international media rejected that characterization.

“We are neither thugs nor terrorists,” one woman said. “The only thing flourishing here is corruption”

Another man told CNN that people “want the truth,” adding: “The government is rich, but all of these people here have loans to pay. We have our pain, and we want to share it.”

The demonstrations are the biggest challenge yet to the autocrat’s rule, with initial public anger over a rise in fuel prices expanding to wider discontent with the government over corruption, living standards, poverty and unemployment in the oil-rich nation — all of which has been exacerbated by the Covid-19 pandemic, experts say.

“This is a government that is highly detached from the reality of what happens on the ground. It’s a country where there are no institutions through which to protest; the only route is on the streets,” Paul Stronski of the Carnegie Endowment for International Peace told CNN.
Protesters in Almaty reportedly stormed the airport, forcibly entered government buildings, and set fire to the city’s main administration office, local media reported. Dozens were reported killed and hundreds more injured in clashes there Thursday. There were also reports of a nationwide internet blackout and damage in other major cities, though Tokayev said internet was gradually being restored as the situation stabilizes. Authorities had previously declared a nationwide state of emergency with a curfew and movement restrictions until January 19, according to local media.

Almaty International Airport will be closed until January 9, Kazakhstan’s Ministry of Industry and Infrastructural Development of the Republic of Kazakhstan said, according to state-run broadcaster Khabar 24. More than 20 international flights have so far been canceled.

Flights to and from the capital, Nursultan, have been restored, Khabar 24 reported.

In his address, Tokayev highlighted that peaceful assembly was legalized in 2020 to promote democracy. However he said calls from abroad to find a peaceful solution were “nonsense.”

“What kind of negotiations can there be with criminals, murderers?” Tokayev added.

Tokayev said a contingent of the Collective Security Treaty Organization (CSTO), a Russian-led military alliance made up of former Soviet states, has arrived in the country “for a short period of time” to carry out the functions of defense and support. The organization’s secretary-general, Stanislav Zas, told Russia’s state-run English language Sputnik news agency that about 3,600 CSTO personnel would be deployed to Kazakhstan to protect government and strategic facilities and help maintain public order. Russian state news agency TASS reported that a brigade of airborne forces had arrived in Kazakhstan.

A contingent of 70 IL-76 and five AN-124 transport aircraft have been delivering military personnel and equipment to CSTO forces “around the clock,” the Russian Defense ministry said in a statement Friday.

Tokayev thanked the heads of CSTO countries for their support and expressed “special gratitude” to Russian President Vladimir Putin for “very promptly and, most importantly, in a friendly manner reacted warmly to my appeal” for a CSTO contingent.

The Kazakh leader also thanked Chinese President Xi Jinping, the presidents of the other CSTO member countries, the presidents of Uzbekistan, Turkey and “the leaders of the UN and other international organizations for their words of support.”

Kazakhstan, the world’s ninth-largest nation by landmass and Central Asia’s the largest economy, has often boasted of its stability in a region that has seen its share of conflict.

Even before its independence in 1991, the country’s political scene was dominated by one man — Nursultan Nazarbayev. The longtime president and former Communist Party official ruled for almost three decades before stepping down in 2019. His autocratic method of governance sparked international concern and saw authorities harshly crack down on protests, jail critics and stifle press freedoms, according to global rights groups. Critics accused Nazarbayev of appointing family members and allies to key jobs in government and his family is believed to control much of the Kazakh economy, Reuters reported.

Nazarbayev was best known in the West for renouncing nuclear weaponry and his relocation of the capital to the futuristic city of Astana — which was later renamed Nur-Sultan, after himself.

On Friday, Secretary of State Antony Blinken said the US remained “very concerned about the ongoing state of emergency” in Kazakhstan, and has questions about the country’s request for peacekeeping forces from the Collective Security Treaty Organization, an alliance of former Soviet states that includes Russia.

Regarding the presence of Russian forces in Kazakhstan, Blinken said “one lesson of recent history is that once Russians are in your house, it’s sometimes very difficult to get them to leave.”

Amnesty International said the protests are “a direct consequence of the authorities’ widespread repression of basic human rights.”

“For years, the government has relentlessly persecuted peaceful dissent, leaving the Kazakhstani people in a state of agitation and despair,” said Marie Struthers, Amnesty’s director for Eastern Europe and Central Asia in a statement.