For these loved ones ripped apart by war in Ukraine, phone messages bring hope and despair 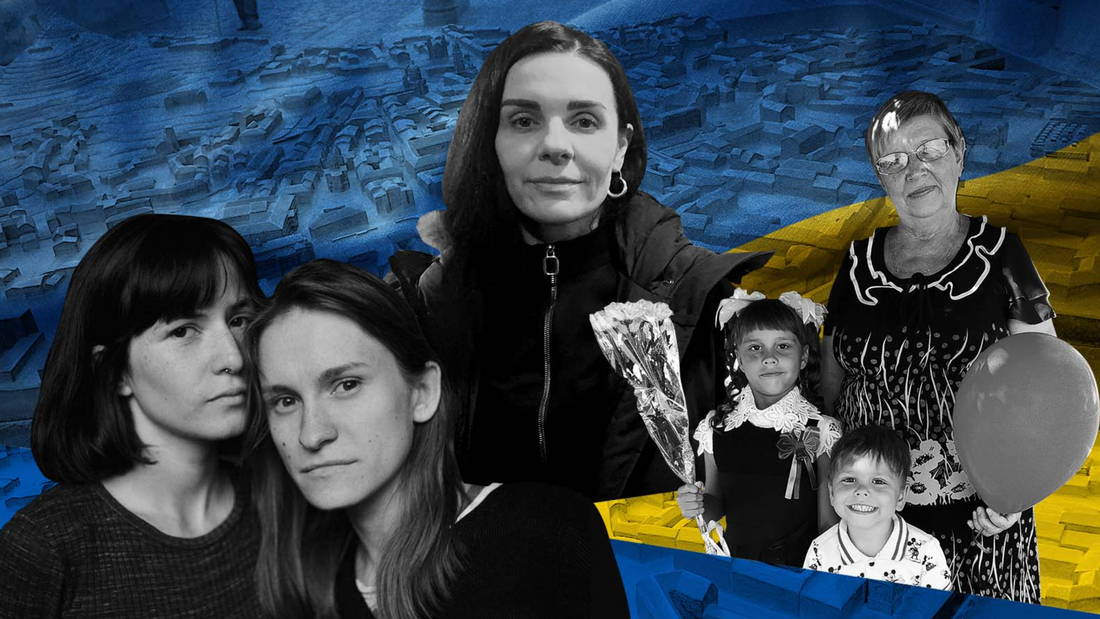 Lviv, Ukraine — In the midst of a days-long, chaotic cross-country train ride to the northwestern city of Lviv, near Ukraine’s border with Poland, a terrible realization dawned on Marina.

The 54-year-old carer, who managed to evacuate an orphanage in a besieged industrial town in the eastern Luhansk province, had no way to return to her own family.

“And now I am all alone,” Marina told CNN from a daycare center-turned-shelter in Lviv, where she and the children from her orphanage were camped out. “I have left my own (adult) children to save the children in the orphanage.”

CNN is not disclosing Marina’s full name because of the risks to her family who have not been evacuated.

The fracturing of families underpins many of the stories of displacement in Ukraine, where Russia’s violent attempts to wrest control of territory in the country’s east, south and center from Ukrainian authorities have leveled entire neighborhoods.

Millions of people are still trapped in besieged cities with virtually no way out. Establishing evacuation corridors out of hard-hit urban centers is proving elusive due to incessant violations of temporary ceasefires. Without safe passage, families are being ripped apart.

Several people CNN spoke to in recent days said they have been unable to contact their loved ones since the start of the invasion. They described frenzied escapes from the country’s worst-affected cities, in which parents, spouses, siblings and grandparents were left behind.

With the Russian assault knocking out power and telephone networks, whole cities have been cut off from the outside world. Many say they don’t know if their loved ones are still alive.

“I don’t understand why the government didn’t try to evacuate us before the invasion started. I don’t want to blame them. Still I can’t help but think my predicament could have been avoided,” Marina added.

Frantic attempts to reconnect with family

Once a tourist hotspot, Lviv is now ground zero for around 200,000 displaced Ukrainians who have flooded the city in search of relative safety. Several theaters and schools converted into makeshift shelters are now covered in mattresses for displaced people. Streets are clogged with traffic. Around nearly every corner people can be heard making teary phone calls to loved ones who stayed behind in war-ravaged areas.

Isabel Merkulova, 31, is a theater performer. These days she sits nervously by her phone, consumed with thoughts of her best friend Anastasiya Lisovska, who is trapped in Hostomel, north of Kyiv. The town has emerged as a key battleground in the war and has witnessed some of its most dramatic scenes — including a showdown at an airport and the killing of its mayor.

Anastasiya trekked to Hostomel from the Ukrainian capital shortly after Russia’s invasion began in a bid to persuade her uncle to flee. By the time he came around, Russian forces had already laid siege to the city. At the time, she spoke defiantly about venturing over to her uncle’s house as bombs rained down. She even entertained thoughts of joining the resistance. But fear quickly crept in.

The dripfeed of text messages from Anastasiya lighting up Isabel’s phone — punctuated by silences fueled by power shortages and telecommunication blackouts — reveal the terrifying uncertainty wracking separated friends and family, who have no idea whether they might see each other again.

Isa, the power is out again. There was a terrible fight.

We went back to our house [from the cellar]. Isa, I’ve never been so scared in my entire life.

Nastia, sending you my hugs. The most important is that you are not injured. F**k, I can’t even imagine what you went through today, but I do believe that everything will be okay!!!

Someone refilled [put money on] my mobile number and I’m very grateful!

Here in Hostomel there is Moscow defence on the streets. I’m scared. There is no tap water today. Tell Yulia and Olia about this moscow military defence. Please!

I will tell them! Are you injured? Nastia, are there any neighbors around?

There are almost no neighbors living here right now. We are not injured for now, but we are on the verge of the breakdown. If only we could read the news and know what is happening around. Our cellphones batteries are dying, there is no electricity and water right now. There’s lots of shooting. It’s so difficult.

In a tearful interview with CNN, Isabel admits that she felt less hopeful than she would have liked about reuniting with her friend of 15 years. She flipped through pictures of their theater tours in Europe and smiled through tears.

“It feels surreal that this was our life,” she said.

After over two days of radio silence, Anastasiya resurfaced with news. By the candlelight of the bomb shelter, she and her neighbors had come to a decision. They would brave a 50-minute walk across the war-torn town to a collection point for evacuations. The government-organized evacuation corridor had failed the day before, but they were running out of food and water, and they had decided that the risk was worth it.

“It was like something from a movie,” Isabel told CNN, as she detailed her best friend’s escape on Thursday. The group had heard gunfire that morning, but embarked on the trip anyway. Along their trek, they encountered a car whizzing down the road and hitched a ride to the collection point. The evacuation corridor held this time and Anastasiya made it to Kyiv. Her uncle, however, stayed behind.

Okay, stay in touch people if you can! Bohdan told me our armed forces are winning the fight near Hostomel! They are winning!

They are pushing the enemy back. But we are in the very centre of this and it’s so dangerous and so f**king scary!

I want to shout.

I want it to stop.

I will try to take a nap now.

I love you all.

I understand it, Nastia! I can’t imagine how you all feel right now but everything will pass and we will meet soon and we will hug each other.

Please text Liuba that we don’t have any electricity again.

Nastia, we will find information about the ways to evacuate you from there!

I will text Liuba, sure.

Please. We need to get out of here.

Nastia, the most important is to keep in touch!

Nastia, have you tried calling those numbers I gave you?

While some separated families have managed to maintain some communication across the hodge-podge of besieged cities, many more have become completely cut off from their loved ones. Iryna Lytvyn, 31, from the eastern town of Volnovakha, in Donetsk, hasn’t spoken to her parents and sister, who stayed behind, in over a week.

She scrolls frantically through local social media groups for signs of life. A day before Lytvyn’s interview with CNN, a neighbor texted her to say that her parents were alive and well, despite the heavy shelling in the town. As for her sister, she has no news.

“I don’t know anything about my sister. The last time we saw her was February 27,” said Lytvyn. “A week ago, someone saw her getting into the car with her husband, but since then, we didn’t talk.”

“I assume she didn’t have a chance to leave,” she continued. “Otherwise we would have spoken. Now all three phones — hers, her husband and my niece are silent.”

Lytvyn fled a week after Russia launched its invasion of Ukraine. Volnovakha was almost entirely destroyed in the first few days of the war. There was no electricity, gas or telecommunications when she left.

“We were completely cut off from the world,” she said in a phone interview with CNN during a brief respite from the sirens in the Dnipropetrovsk region, about 180 miles northwest of her hometown, and some way from the war’s main faultlines. “We found ourselves in the open air under shelling. To say it was scary is to say nothing. But there was no point in going back.”

Another native of Volnovakha, Pavlo Eshtokin, also described a helter skelter escape driving his wife and daughter amid bombardment to safety. “For the first few days after we got out, we lost the ability to speak, how to think,” said Eshtokin. “There will be no normal life anymore.”

He said he left his 93-year-old grandmother, who lived through World War II, behind and has no way of reaching her. “I can only hope that she’s remembered her survival skills from that war, and that she’s with her friends,” he said. “But that’s all I can do really. Hope.”

‘The most important performance yet’

Natalia Rybka-Parkhomenko woke up with a start in her Lviv apartment at dawn on February 24. “The war has started,” her father exclaimed on the phone from the eastern city of Kharkiv, one of the first to be hit by Russian President Vladimir Putin’s blitz-style invasion.

Her family quickly hauled whatever belongings they could grab into their car, before realizing with crushing dismay that they didn’t have enough gas to make the trip. Like many Ukrainians, they were blindsided by the sheer speed of the invasion, despite weeks of warnings from Western officials.

That skepticism — reinforced by Ukrainian President Volodymyr Zelensky in the weeks before the invasion — appears to have exacerbated the pandemonium on the streets, and at train stations. Now Ukrainians are in the midst of the inconceivable: being forcibly ripped apart from those they hold dear.

“I didn’t know what a panic attack was before that morning,” said Rybka-Parkhomenko, an actress and a director at Lviv’s historic Les Kurbas theater. She walked the streets aimlessly, deciding ultimately to turn her arthouse theater into a shelter for the displaced.

She shifted between converting the space into a reception point for displaced families and incessantly checking her phone for messages from her parents and brother. The hardest part, she said, was trying to keep other people’s spirits up while she was wracked with worry herself.

“It was the most dramatic and important performance we have ever done,” she said of the ordeal, her fingers elegantly interlaced as she spoke to CNN from the basement of the theater, filled with relief items for the displaced.

Others in the theater-turned-shelter are less fortunate. Tamila Kheladze shares a large mattress next to the stage with her two sisters and her year-old son, Denis. Her husband has stayed behind in Kyiv to tend to his shop, as the three women chart their escape to Poland, and then on to Sweden.

He had just sent her a text message wishing her a happy International Women’s Day, Kheladze said on Tuesday, her intact French manicure the only visible remnant of her former life. “He said ‘honey, we’ll be together soon.'”

“I hope I will see him soon, but I think it will not be so soon,” she said, her voice faltering between sobs. “Now we must go abroad as soon as we can. We must go for the children. Only for that.”