Flying on Russian planes is about to get much more dangerous 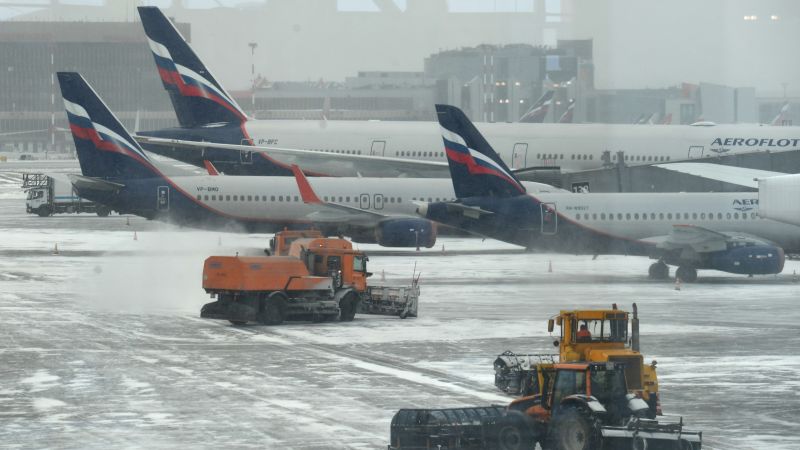 As Russia’s economy gets pummeled by increasingly severe western sanctions for its invasion of Ukraine, the country’s crucial airline industry could soon find itself on life support.

Russian airlines have been essentially cut off from much of the world. But that is the least of the industry’s problems. Russia’s domestic airline industry could soon become a mere shell of its former self due to restrictions on its operations.

Sanctions imposed by the United States and the European Union mean that the world’s two major aircraft makers, Boeing

(EADSF), are no longer able to supply spare parts or provide maintenance support for Russian airlines. The same is true of jet engine makers.

That means Russian airlines could run out of necessary parts within a matter of weeks, or fly planes without having equipment replaced as frequently as recommended to operate safely.

“The priority of the Russian government doesn’t include consumer safety and reliability,” said Charles Lichfield, the deputy director of GeoEconomics Center at the Atlantic Council, an international think tank.

Russia’s major carrier, Aeroflot, has been cut off from Sabre, which had provided the computing backbone that allowed the airline to easily book tickets. And aircraft leasing companies, which own about 80% of the nearly 900 commercial planes in Russia’s fleet, have been ordered to repossess those planes by the end of this month. Those leased planes have a declared value of $13.3 billion, according to data from aviation analytics firm Cirium, although the true market value at the moment is likely a fraction of that.

“Within a year Russia will cease to have any kind of viable airline industry,” said Richard Aboulafia, managing director of AeroDynamic Advisory. He said the country’s airline industry could soon find itself somewhere between the heavily sanctioned industries in Iran and North Korea.

That poses a serious problem for Russia’s overall economic activity.

Russia is the world’s largest nation by landmass, more than twice the size of the continental United States. It needs to have a viable airline industry to keep its economy working, Lichfield said.

“Russians don’t fly as much as Americans do. They don’t fly to Siberia for vacation,” he said. But the airline industry is a crucial link for businesses, not only for international flights, but also for domestic service for its energy sector, due to the need to transport engineers, other workers and equipment to and from its far flung oil fields.

“It is an important part of Russia’s economy. They need that backbone. They need some basic domestic [airline] industry to remain in place,” Lichfield said.

With blows to the Russian economy from the myriad sanctions mounting, it is inevitable that its economy won’t require all those flights in 2022, or likely for years to come. But the loss of essential parts and the possibility of aircrafts being repossessed means Russia’s ability to recover in the future will be severely damaged.

Some of the companies leasing planes to Russian carriers are Chinese, and China has yet to impose any sanctions of its own. But it is possible that even Chinese leasing companies could feel compelled to try to take possession of the Boeing and Airbus jets they have leased to Russian airlines, Aboulafia said. That’s because those Chinese companies don’t want to risk any trouble buying planes from Airbus or Boeing in the future.

“These are western jets. I’m not sure how Chinese firms will treat the sanctions,” he said. “And the more important thing is these jets won’t be supported with parts and maintenance any longer. It’s a real issue if they lose their certificates of airworthiness, which can happen if proper records aren’t kept, or especially if they’re cannibalized for parts.”

China has already indicated it won’t ship parts for those planes to Russia, according to a report on Russian news agency TASS which quoted Valery Kudinov, head of the aircraft airworthiness department at the country’s Federal Air Transport Agency.

Russia announced plans for a new law Thursday that would block those planes from leaving the country. But that would set up a situation wherein its airlines will have trouble leasing planes in the future, even after the sanctions end.

“The Russian airlines want to do business with the leasing companies. They suspect when all is said and done that they’ll need airplanes in the future,” said Betsy Snyder, credit analyst with Standard & Poor’s who follows aircraft leasing companies. “But they’re being told by the powers that be in Russia not to do that.”

It is much easier for the global aviation industry to live without Russia, which accounts for only about 1% of total commercial jet purchases, than it will be for Russia to live without US and EU aircrafts or parts. Russia’s attempts to build its own commercial jets have produced aircraft of questionable safety which have found no buyers on the international market.

Can a country as large as Russia live without a modern, viable airline industry?

“That’s a thesis that has never been put to the test,” Aboulafia said. “But it’s about to be.”