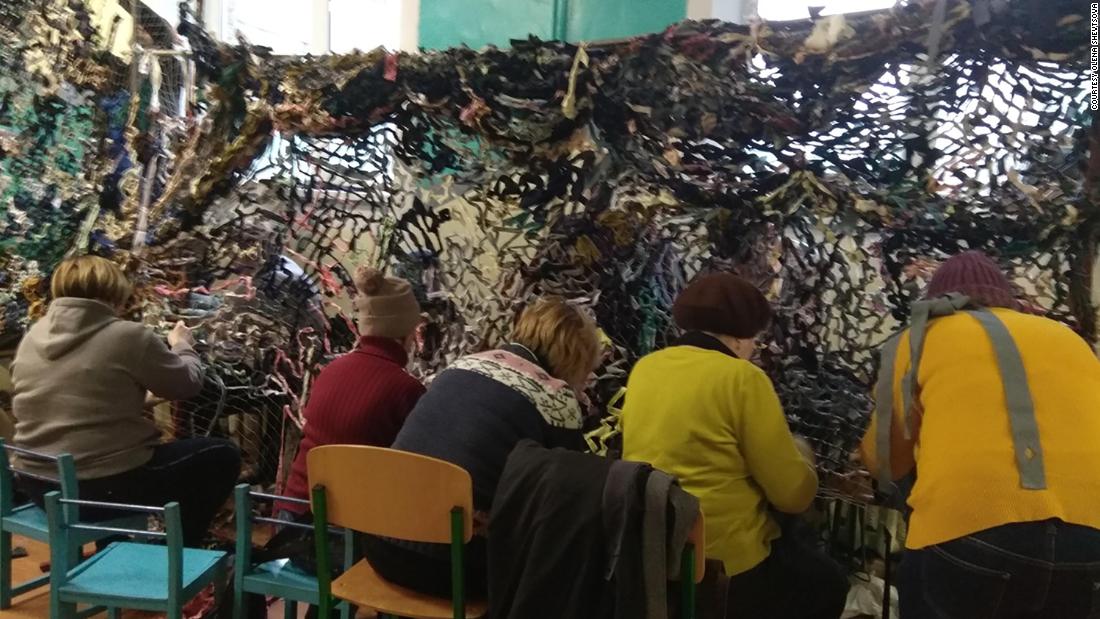 “I call us the spider women,” she said of her fellow volunteers in an email to CNN.

She said some people cut out fabric, some hang up the webbing, others make the braiding and children also come to help.

“The process reminds me of rug weaving,” Shevtsova. “The hands are busy and it feels better. Last time when I was there we also sang Ukrainian songs, and it was so cool to uplift the spirit!”

She lives in a small town in the Dnipropetrovsk region in southeastern Ukraine with her 10-year-old son and her dog and cat.

Shevtsova has been selling her woven goods on the Etsy marketplace since 2015 and said weaving is her primary source of income.

She cannot ship orders right now because of the fighting, but she is still getting support from international buyers who’ve purchased her digital patterns and gift certificates. Some people have also ordered physical products, but told her not to worry about shipping them.

“I never thought so many people who don’t know me would like to help me and my family,” Shevtsova said.

A search for Ukraine on Etsy turns up more than 90,000 results and pages of T-shirts, bracelets, buttons and other items in the blue and yellow of the country’s flag. Many sellers have promised to donate the proceeds from the products to Ukrainian relief groups.
People from all over the world are also booking stays at Airbnb properties in Ukraine they don’t plan to use, to get money to hosts.

An Etsy seller named Christie, who sells baby clothes from her home in Arizona, asked Ukrainians to post links to their shops in a post in one Facebook group, so members could show their support.

She said her original goal was to help send “thoughts and prayers” to Ukrainian members of the Etsy community, but she has bought some items directly from them.

“I want them to feel supported because I watch the news every day,” Christie said. “Oh my gosh, I can’t even imagine what they are going through.”

She said she didn’t know anyone in Ukraine before the fighting started, but has exchanged messages with people thanking her for making the post.

Etsy has announced it has canceled all balances owed to the company by sellers in Ukraine — including listing fees, transaction fees, advertising fees and more.

Shevtsova said there has not been any fighting in her area yet, but air raid alarms go off several times a day and neighbors are cleaning out their basements in case they need to take shelter.

“We live in a constant state of anxiety and uncertainty about what will happen next hour, night, morning, day,” she said.

Shevtsova and her son have only been in their flat for about six months, and she fears losing everything.

Sitting down at night to read messages she has received has been calming, she said.

“It is so helpful to share overwhelming feelings and emotions,” she said. “It’s easier together, it’s easier to feel someone’s support.”

The Etsy app makes a “cha-ching” sound every time there is an order and Shevtsova said it’s been reassuring to hear it throughout the day.

“To be honest, these sounds warm my heart,” she said. “Hearing ‘cha-ching’ I remember someone helps me, I am not alone, someone sends me love and power to live through this horror having food for my family and being even able to help other people in need, I feel this support of many people worldwide.”