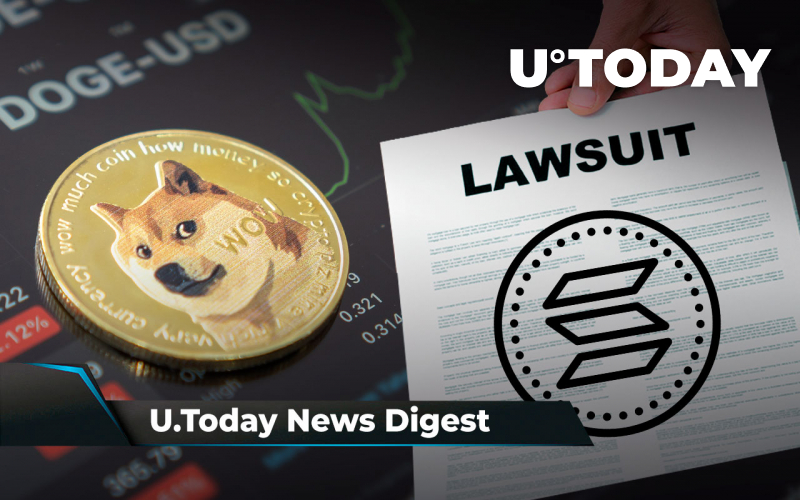 Don’t miss anything important in the crypto world with U.Today’s daily news digest!

U.Today has prepared a summary of the top four news stories over the past day.

Robinhood introduces new feature for Shiba Inu and other coins

According to the official announcement on Twitter, Robinhood, a popular trading app, introduced a new option for crypto transfers. From now on, its users can send and receive all digital assets available on the platform, including Shiba Inu and Bitcoin. The news was retweeted by Shiba Inu’s official Twitter account, scoring more than 6,000 likes from thrilled members of the SHIB community. As reported by U.Today, Robinhood finally added support for the second biggest meme crypto in early April after a Change.org petition asking the company to list SHIB got more than half a million votes. Earlier this year, the trading app launched a noncustodial wallet, making it possible for traders to manage their own crypto.

Solana Labs has been hit with a class-action lawsuit, which could have massive implications for the cryptocurrency industry. Mark Young, the lead plaintiff, alleges that SOL token is an unregistered security. As written in the complaint, SOL token satisfies the Howey test, supporting the conclusion that the asset is a security, since the project’s success and its potential returns were dependent on Solana’s ability to deliver on its promise to create the network. Young claims that the defendants managed to make “enormous” profits with the help of the cryptocurrency. The plaintiff has also accused Solana Labs of making “deliberately misleading” statements about the circulating supply of SOL securities. Young wants the court to award him and other class members damages “in an amount to be proved at trial.”

Dogecoin, the original meme coin, has managed to climb back to the $0.07 price level after more than half a month since plunging in early June. DOGE owes its triumphant return to Elon Musk and his The Boring Company; the centibillionaire’s company now allows customers to pay with Dogecoin for a ride on the Loop, its Las Vegas transit system. Some other news about DOGE adoption and overall positive sentiment on the market have also played a part. Earlier this week, it became known that DOGE was accepted as payment for products from WeCook, a Canadian food tech start-up. And last Tuesday, FTX Japan, one of the top crypto exchanges, announced adding support for the canine coin. All of this positive news perfectly overlapped on the Dogecoin chart, which was actively signaling a possible breakout of an important price level.

Charles Hoskinson, CEO at Input Output, addresses the fear, uncertainty and doubt (“FUD”) that surrounded the upcoming Vasil Hard fork in a recent tweet, stating that the blockchain’s smart contracts will still function after the implementation of the much-awaited upgrade. This comes after some Twitter users started claiming that Cardano’s smart contracts will need to be rewritten as they are incompatible with the Vasil hard fork. Input Output’s vice president of community and ecosystem Tim Harrison rushed to reassure Cardano enthusiasts, explaining that current dApps that use the first version of the Plutus smart contract platform will still be compatible after the Vasil upgrade. Those developers who want to take advantage of all the enhancements offered by Plutus V2 will have to utilize and deploy them in their applications.