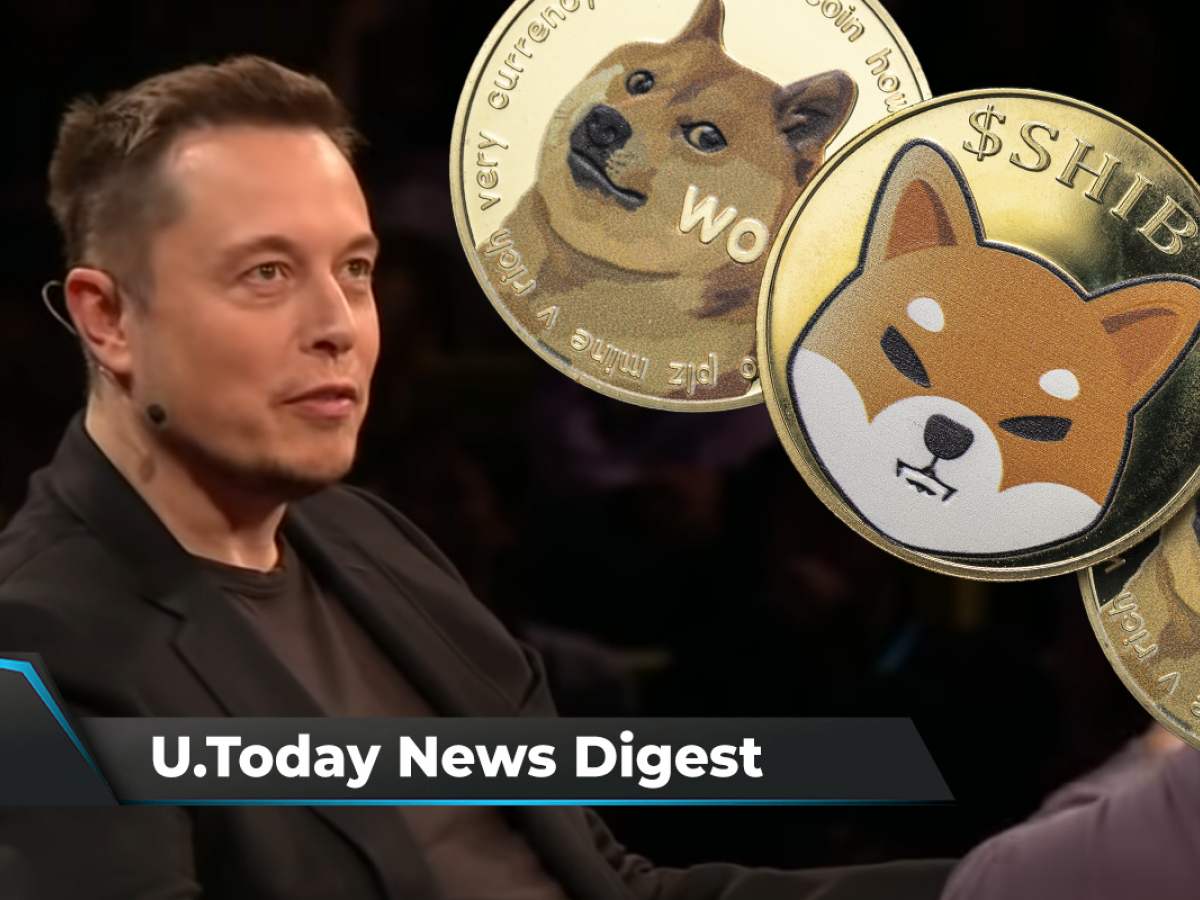 Only the latest events in the crypto industry in U.Today’s news digest, don’t miss this piece!

Why does Elon Musk favor Dogecoin more than Bitcoin? What does SHIB’s 2022 burn roadmap say? Read U.Today’s news digest to find out!

More great news from Bigger Entertainment stirred the Shiba Inu community yesterday: the firm has released the meme coin’s bigger burn roadmap for 2022. According to this document, SHIB burn initiatives are scheduled to happen every month. Apart from that, SHIB supporters will be able to enjoy various treats and events, such as the Shib Lovers merch campaign, the Shib SuperBurn event for soccer fans and NFT Madness for basketball lovers.

The head of Tesla and SpaceX, Elon Musk, has recently taken part in a podcast by Lex Fridman, during which the centibillionaire compared Bitcoin and Doge, stating that the latter has a higher transaction volume and much lower transaction fee. Musk also added that by 2021, Bitcoin’s transaction speed should have become much higher than it is now, referring to it as “comically low.” Taking all this into consideration, Musk proceeded with calling Doge “better than anything else I’ve seen, just by accident.”

This is not the first time the Tesla boss has favored Dogecoin; when Musk was announced Person of the Year by Time Magazine back on Dec.13, he also stated that Dogecoin is much better suited for transactions than Bitcoin.

According to SundaeSwap’s official announcement, it has completed a security audit in partnership with Runtime Verification (RV). Thanks to this audit, a number of critical issues have been identified. SundaeSwap Labs’ chief information officer, Pi Lanningham, claims that the DEX can now satisfy community standards. Now that the audit has been completed, the project will continue to work with RV on future enhancements. According to Lanningham, cooperation is “essential” to the exchange’s long-term viability.

Yesterday, whale-tier transaction tracker WhaleAlert detected two large XRP transactions. The first one carried 162 million XRP from the Nexo exchange, appearing only a few hours before the asset spiked down by 4.3%. The second transaction was made on the Binance exchange to an unknown address and was worth $11 million. Both transactions occurred during a high inflow trend.

Unfortunately for its holders, a stable exchange flow does not help XRP to continue trading above $0.9. The coin is now changing hands at $0.842.