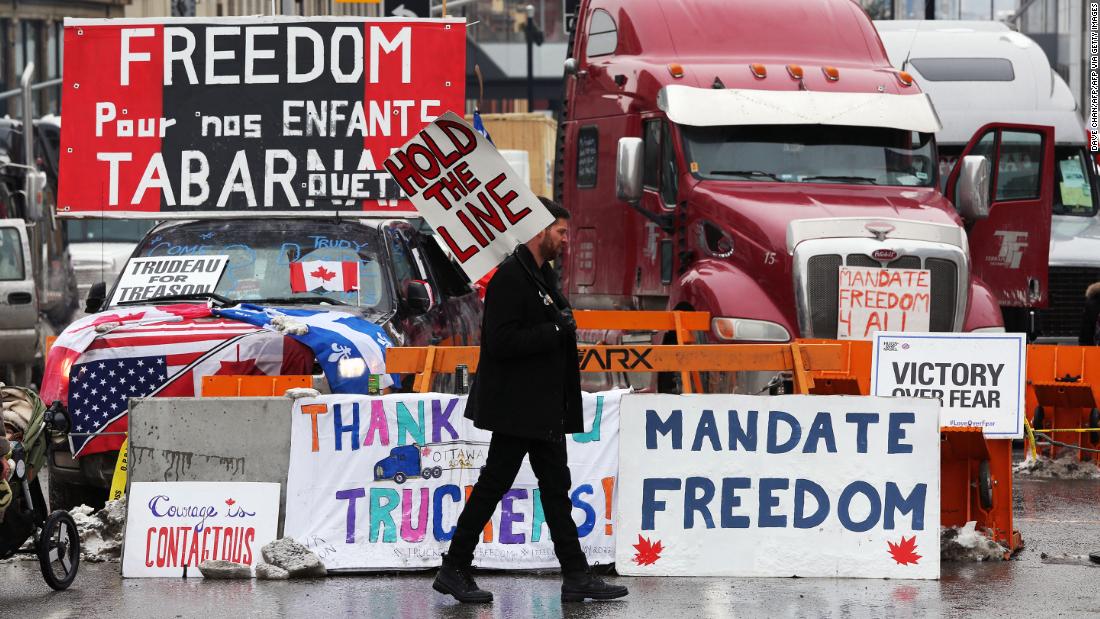 For nearly two weeks, Canadian truckers have been protesting a new rule that requires them to be fully vaccinated against Covid-19 or face a two-week quarantine in their homes after they return across the US-Canadian border. Others have joined to rally against mask mandates, lockdowns, restrictions on gatherings and other Covid-19 preventative efforts in the country.

Demonstrations have popped up across Canada, including at the Ambassador Bridge, which links Windsor, Ontario, and Detroit and is the busiest international crossing in North America. Idling trucks and vehicles impeded access to the bridge for a third day Wednesday, snarling traffic on both sides of the Canadian-US border.

“When the border crossing of this magnitude — almost a third of all traffic between our two countries crosses here — and when it closes down, it has an immediate and material impact on the economies of our both nations,” Windsor Mayor Drew Dilkens told CNN’s Don Lemon on Tuesday night.

Some protesters have been loud — so annoyingly loud that a lawsuit is demanding an end to the deafening honking unleashed by the truckers in downtown Ottawa, Canada’s capital, where residents have endured the near-constant noise in their homes.

Zexi Li, who lives within five blocks of protests at Parliament Hill, sued to demand an end to the deafening beeping. Sound levels from the air and train horns are “dangerous and cause permanent damage to the human ear” and cause “significant mental distress, suffering and torment,” the lawsuit filed by the 21-year-old says.

Ontario Superior Court Justice Hugh McLean on Monday issued a 10-day injunction that prevents demonstrating truckers on downtown Ottawa streets from using air or train horns. A hearing is set for next Wednesday.

Ottawa Mayor Jim Watson described the constant honking of large trucks as “tantamount to psychological warfare” and wrote in letters to federal and provincial officials earlier this week that, “People are living in fear and are terrified.”

Access to the bridge from the Canadian side could be tricky, however. Owing in part to protests on that side, traffic was heavy and some roads were blocked Wednesday morning. One access route in particular was still open, Windsor police Constable Talya Natyshak said.

About 100 protesters were in the area of the bridge in Windsor as of 9 a.m. ET Wednesday, Natyshak said.

Canadian-bound and US-bound lanes were open to passenger and some commercial traffic Wednesday morning at an alternative, the Detroit-Windsor tunnel, which has height restrictions, according to Canadian and US border websites.
Another alternative, the Blue Water Bridge connecting Port Huron and Sarnia about a 60-mile drive northeast of Detroit, also was open to traffic from both sides. While little wait was reported for US-bound traffic and Canada-bound passenger vehicles, commercial vehicles headed to Canada were enduring delays of more than four hours Wednesday morning, according to Canada’s website for wait times.

The border crossing remained inaccessible Wednesday morning, preventing movement in both directions, Logan said. CNN has reached out to the Canadian Border Services Agency for comment.

There was little police could do to remove trucks from Highway 4, RCMP Deputy Commissioner Curtis Zablocki said Tuesday. Even if officers were to detain the truckers blocking the road, they wouldn’t be able to clear the blockade, he said.

Protests started in Coutts 12 days ago with more than 250 truckers but as of Tuesday evening had dwindled to around 50, Zablocki said.

The blockade continued despite Alberta Premier Jason Kenney announcing Tuesday evening that the province has begun to roll back some Covid-19 restrictions. Albertans won’t need to show proof of their Covid-19 vaccination to eat in restaurants or get into venues; some capacity limits are removed; masks mandates for schools will be removed Monday.

Kenney addressed the blockade in the news conference, calling it an inconvenience that’s hurting business across the province.

“I’ve said consistently we welcome the freedom of people to protest lawfully and peaceful, but this is not a lawful protest,” Kenney said. “This and other road blockages constitute a safety hazard a serious interference in the lives of others.”

Many Ottawans are at their ‘breaking point’

In Ottawa, the police department has requested additional resources from Watson so it can better deal with the unrest.

“We have been 100% full out on this for the last 10 days straight, and we will not rest until it’s done, but we need more help,” Ottawa Police Chief Peter Sloly said Monday.

Sloly has been pushing all three levels of government for “whatever they can bring to bear on the permanent, sustainable, lawful, safe resolution of this demonstration,” he said, adding that many Ottawans are at their “breaking point.”

“This is crushing for those residents and their businesses,” he said. “It has to stop, and we are doing everything we can possibly do to stop it. We need more help; we’re asking for that help; and we’re starting to receive that help, but we need more to get this done.”

In letters the mayor wrote to Prime Minister Justin Trudeau, Canada’s minister of safety and Ontario’s premier and solicitor general, he asked for additional officers “to quell the insurrection that the Ottawa Police Service is not able to contain.”

Police have opened more than 60 criminal investigations linked to the protests and 23 arrests have been made. Charges include mischief, flight from police and menacing. More than 1,300 tickets have been issued for violations ranging from excessive noise and use of fireworks to driving a motor vehicle on a sidewalk.

Trudeau on Monday acknowledged protesters had a right to voice their concerns but said residents do not deserve to be harassed in their own neighborhoods.

Speaking to CNN Tuesday, Dilkens, the Windsor mayor, said Canada is a Democratic society, where protesting is acceptable.

“But blocking off the busiest border crossing between our two nations is not ok. So how do we get at least a lane of traffic open in each direction to allow trucks to continue to flow to get goods to market in the US?” Dilkens said.

“It has gathered a head of steam, yes, with folks who are feeling upset about vaccine restrictions or mandates, having to wear a mask,” Dilkens said. “But it’s also been a gathering point and rallying cry for many who are just angry with government in general. And so it is unclear how this ends, and what would make everyone happy so that they go away and stop protesting. We’re not sure.”