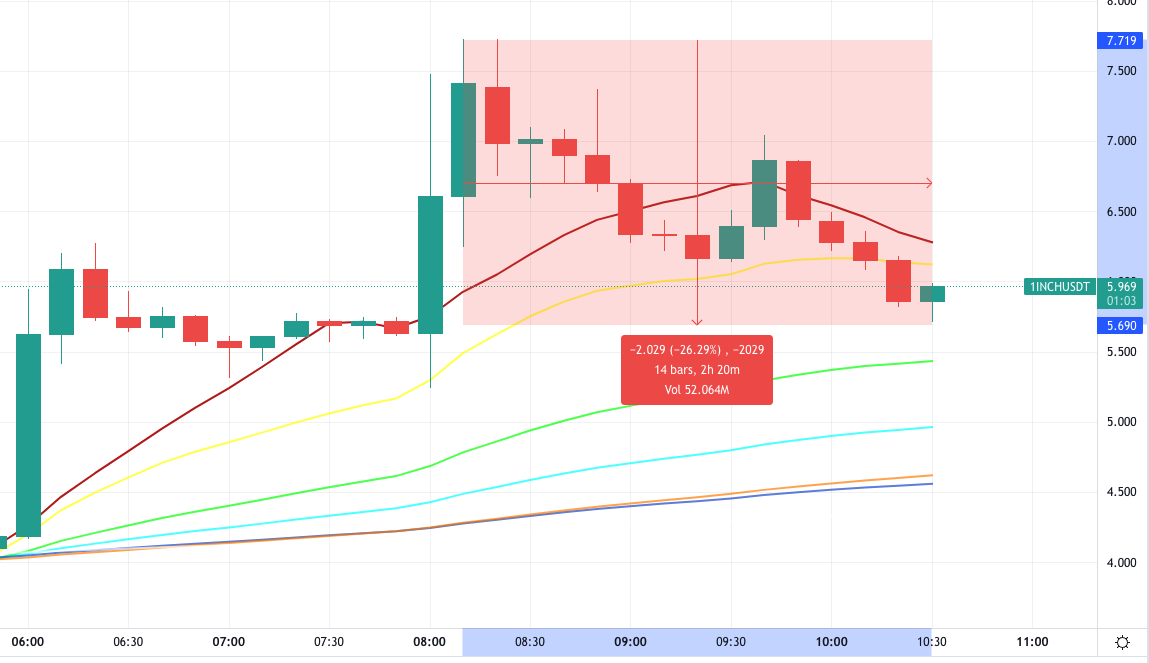 Bitcoin and the broader digital asset market fell sharply during early morning hours in New York, with BTC notching a roughly 5% decline and ETH tumbling over 8% in the space of a few hours, driven by cascading liquidations of traders using dangerously high levels of leverage.

In recent days both the amount of leverage and the open interest in crypto derivatives markets have been climbing to levels not seen since the September 7, 2021 mini-crash. This has been a frequent theme of the current bull market rise, and the third such drawdown in the past week alone.

Ether’s drop was more pronounced, though also similar to an 8% drop seen on October 21, after the second largest cryptocurrency registered an all-time high.

Ethereum’s ‘Beacon Chain’ — also known as Eth 2.0 — which will be merged with the current Ethereum mainnet in 2022, underwent a scheduled upgrade at approximately 7:00 am ET. Dubbed Altair — after the twelfth brightest star in the night sky — it’s “the first major network upgrade that will have an exact rollout time,” according to ethereum.org, due to the Proof-of-Stake nature of the new chain’s consensus mechanism.

The market correction preceded the upgrade, but appears unrelated. There is now over 8 million ETH  — still $32 billion in dollar terms, even after Wednesday’s drop — staked in the Beacon Chain.

Bitcoin has seen a slew of positive fundamental news in recent days, with additional investment avenues in traditional finance being added by Wisdom Tree and Valkyrie, following a wildly successful launch of the first futures-based ETF from ProShares.

“On the heels of the first bitcoin futures ETF being approved last week, many now believe that an ether futures ETF will soon be approved as well,” wrote Noelle Acheson, Head of Market Insights at Genesis, in an email to Blockworks. “We are seeing these assumptions drive interest on our desk and the overall price of ether over the past seven days, evidenced in ETH’s outperformance over BTC.”

But the prospect of an ether ETF is unlikely in the near term, Acheson notes, due to a relative lack of liquidity in the ether futures market on the CME, and the need for greater regulatory certainty, chiefly from the US SEC, as to its potential status as a security.

New listings on centralized exchanges still can have a strong influence on the price of even well-established DeFi names. The 35% rise in money-market protocol AAVE and and more than 80% for decentralized exchange 1INCH is an apparent consequence of new listings announced against BTC trading pairs by Korean exchange Upbit.

Both names subsequently gave back about half their gains along with the larger market decline.

Bitcoin CME Futures have been trending down since their peak seven days ago at $67,680. Nasdaq and S&P 500 futures are trading flat, falling about -0.3% during the crypto market skid before bouncing.