Biolabs: Russia and QAnon have the same false conspiracy theory about Ukraine 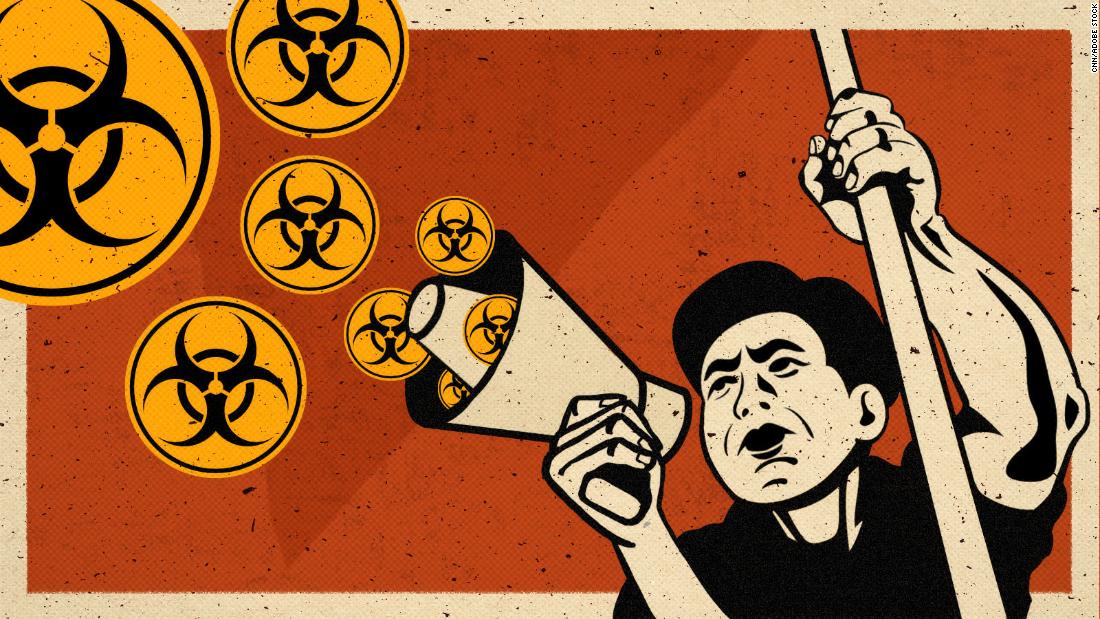 QAnon’s core prophecy has always been that there is a “plan” and that former President Donald Trump will rid the world of an evil cabal, culminating in the unmasking, imprisonment or even execution of cabal members. But that prophecy dates back to when Trump was actually president — now that he’s not, believers have been convincing themselves there is evidence that the plan is still very much in place, maybe even more so than ever before. In the Kremlin’s disinformation, some have seen that hope.

There are US-funded biolabs in Ukraine, that much is true. But they are not building bioweapons. Actually, it’s the opposite: Part of the reason for their creation was to secure old Soviet weapons left behind in the former Soviet republics. The State Department has described the claims as nonsense — and the US and Ukrainian governments have repeatedly, and for years now, tried to bat down conspiracy theories about the labs and spoken about the work that is actually being done in them
Russia’s falsehoods about labs like this have not been limited to Ukraine. Similar claims were made about a lab in Tbilisi, Georgia; those were proven false. Dr. Filippa Lentzos, co-director of the Centre for Science & Security Studies at King’s College London, visited the lab along with other experts and debunked the Russian claims. She told CNN the Russians are spreading the same lies about labs in Ukraine.

There is a disinformation machine at work here.

It goes a bit like this. The Russian government makes suggestive statements, leaving breadcrumbs that are dutifully repeated by official Russian state media — and then, increasingly importantly, by dozens of faceless websites (some of which the US has alleged are tied to Russian intelligence). Social media accounts push the idea further, build on it, make it more fantastical — and those more fantastical claims eventually end up getting picked up by official Russian media and the cycle begins again.
Russia has been pushing various bits of disinformation about the US and biological weapons since the Cold War — infamously publicizing, for instance, the false idea that the US manufactured the HIV/AIDS virus.
Matt Field, an editor with the Bulletin of the Atomic Sciences, told CNN disinformation about US-supported bio-labs seems to peak when Russia finds itself under increased international scrutiny — the allegations about the Tbilisi lab, for instance, bubbled up in 2018 amid the international scandal after Russia was found to have poisoned Sergei and Yulia Skripal in Salisbury, England.

The methods used to spread this kind of disinformation are not new, either. Former KGB agents have said the KGB would plant stories in obscure or small publications in foreign countries and then those stories would be cited as sources in official Russian media.

That process can happen a lot more easily today. Instead of having to go to the trouble of convincing an editor at a newspaper to publish disinformation, Russia can push it out on seemingly independent websites that present themselves as news outlets but are no more than Kremlin cut-outs. The US government has identified websites working in tandem with Russia’s FSB security service.
Russia still plants stories in real outlets too — for example, in 2017 the leftwing US magazine Counterpunch detailed how it had been duped into running articles under the byline “Alice Donovan,” which the US government later confirmed was a fake identity run by GRU Russian military intelligence.

Russia does not necessarily need to push its disinformation to QAnon adherents, because the two have enough shared interests. Today, many Americans find themselves in online groups and following accounts that mobilized around QAnon — there, Russian disinformation is sometimes embraced with enthusiasm.

Over on the show’s online discussion forum a person who had intentionally misspelled the word “Patriot” so it would include the letter “Q” wrote, “I had a hunch that these bastards were getting ready to release another bio weapon and we needed SOMEONE to put a stop to it. Putin stepped up. IMO this was part of his deal with DJT.”

“A central element of conspiracy theory belief systems is the constant refining of narratives and reactions to wider events to support the grand narrative,” Ciarán O’Connor, a researcher with the Institute for Strategic Dialogue, a think tank that analyses disinformation, told CNN.

Journalists and government officials have been trying to debunk the falsehoods and spread the truth. Big Tech companies have been trying to stop the conspiracy theory’s spread on their platforms, too. But those measures have thus far been no match for the power of belief and the sustained campaign to promote this theory.

On Tuesday, a Chinese Foreign Ministry spokesman helped the Russian effort, making his own suggestion that the US was up to something nefarious at labs in Ukraine. The same official in 2020 promoted the idea that the US military brought Covid-19 to China.