Biden speaks with China’s Xi as tension grows over Taiwan 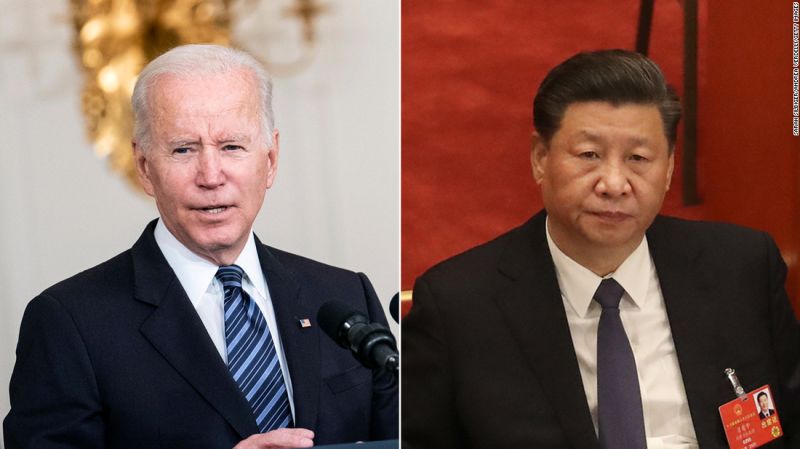 President Joe Biden and his Chinese counterpart Xi Jinping held a lengthy and candid discussion about Taiwan on Thursday as tensions mount between Washington and Beijing, despite Biden’s onetime hope of stabilizing the world’s most important country-to-country relationship.

The two leaders did agree to begin arrangements for a face-to-face summit, their first as Xi resists travel amid the Covid-19 pandemic. And certain areas of cooperation, including climate change, were hashed out.

But the Taiwan issue proved among the most contentious. The issue has emerged as a serious point of conflict, as US officials fear a more imminent Chinese move on the self-governing island and as a potential visit by House Speaker Nancy Pelosi prompts warnings from Beijing and a concerted effort by the Biden administration to prevent tensions from spiraling out of control.

The matter was discussed at length in the two-hour-and-17-minute phone call Thursday. Xi offered an ominous warning to Biden, according to China’s version of events.

“Public opinion shall not be violated, and if you play with fire you get burned. I hope the US side can see this clearly,” he told Biden, according to China’s state news agency.

The White House’s account of the call was less specific.

A senior US administration official called the Taiwan discussion “direct and honest” but downplayed Xi’s warning, suggesting it was standard for the Chinese leader to warn about the risks of “playing with fire.”

The phone call was Biden and Xi’s fifth conversation since February 2021. Ahead of time, US officials said a range of topics – from the tensions surrounding Taiwan to economic competition to the war in Ukraine – were likely to arise.

But hopes for substantially improving ties with Beijing were low. Instead, Biden’s aides hope maintaining a personal connection with Xi can, at most, avoid a miscalculation that might lead to confrontation.

“This is the kind of relationship-tending that President Biden believes strongly in doing, even with nations with which you might have significant differences,” communications coordinator for the National Security Council John Kirby said this week.

As Thursday’s call was concluding, the two leaders made note of how much work they had created for their teams, including arranging the possible in-person meeting. They have yet to meet face-to-face as presidential counterparts.

Opportunity for a summit could arise in November, when a series of summits will occur in Asia – including the Group of 20 in Bali, Indonesia, and the Asia-Pacific Economic Cooperation in Bangkok, Thailand. People familiar with the matter said US officials are looking to arrange such a meeting on the margins of one of the summits.

Planning for Biden’s phone call with Xi predated the furor over Pelosi’s proposed visit to Taipei. Neither side revealed whether Pelosi’s plans were discussed specifically.

Biden is also currently weighing whether to lift some Trump-era tariffs on China in a bid to ease inflation, though White House officials said he hadn’t yet made up his mind and suggested ahead of time the topic wouldn’t factor heavily into his conversation with Xi.

Instead, it is China’s escalating aggression in the region – including over Taiwan and the South China Sea – at the center of the current tensions. US officials fear without open lines of communication, misunderstandings could spiral into unintended conflict.

That includes how Beijing responds to Pelosi’s potential visit to Taiwan.

Administration officials have been working quietly over the past week to convince the House speaker of the risks inherent in visiting the self-governing island. Defense Secretary Lloyd Austin said Wednesday he’d spoken to Pelosi to provide his “assessment of the security situation.”

Pelosi has not made any announcements about her plans for a trip, which haven’t been finalized.

“I never talk about my travel. It’s a danger to me,” she said Wednesday.

Yet even unofficial word that the third-in-line to the US presidency was considering a visit to Taiwan prompted an outsized response from Beijing, which considers visits by top-ranking American officials a sign of diplomatic relations with the island.

“If the US insists on taking its own course, the Chinese military will never sit idly by, and it will definitely take strong actions to thwart any external force’s interference and separatist’s schemes for ‘Taiwan independence,’ and resolutely defend national sovereignty and territorial integrity,” Ministry of Defense Spokesperson Tan Kefei said Tuesday in response to questions over Pelosi’s reported trip to Taipei.

The White House called those comments “unnecessary” and “unhelpful,” saying the rhetoric only served to escalate tensions “in a completely unnecessary manner.”

They also revealed what US officials have said is a misunderstanding by Chinese officials over the significance of Pelosi’s potential visit. The officials said China may be confusing Pelosi’s visit with an official administration visit since both she and Biden are Democrats. Administration officials are concerned that China doesn’t separate Pelosi from Biden much, if at all.

That adds pressure to Biden’s call with Xi. Officials were circumspect about whether Pelosi’s visit would arise, or how much it would factor into the conversation. But China’s apparent confusion over the differences between the White House and Congress could inject a level of personal animus into the talks.

Administration officials’ concerns over Pelosi’s trip are rooted partly in its timing. It would come at a particularly tense moment, with the upcoming Chinese Communist Party congress during which Xi is expected to seek an unprecedented third term putting pressure on the leadership in Beijing to show strength. Chinese party officials are expected to begin laying the groundwork for that conference in the coming weeks.

With China recently reporting its worst economic performance in two years, Xi finds himself in a politically sensitive situation ahead of the important meeting.

Biden and Xi spent many hours in each other’s company when each was his country’s vice president, traveling across China and the United States to form a bond.

Biden last spoke to Xi in March, when he worked to convince the Chinese leader not to support Russia amid its invasion of Ukraine. Officials have been watching closely how Beijing responds to the invasion, hoping the mostly united western response – including a withering set of economic sanctions and billions of dollars in arms shipments – proves illuminating as China considers its actions toward Taiwan.

US officials believe there’s a small risk China would miscalculate in responding to a potential Pelosi visit. Biden administration officials are concerned that China could seek to declare a no-fly zone over Taiwan ahead of a possible visit as an effort to upend the trip, potentially raising tensions even further in the region, a US official told CNN.

That remains a remote possibility, officials said. More likely, they say, is the possibility China steps up flights further into Taiwan’s self-declared air defense zone, which could trigger renewed discussions about possible responses from Taiwan and the US, the US official added. They did not detail what those possible responses would entail.