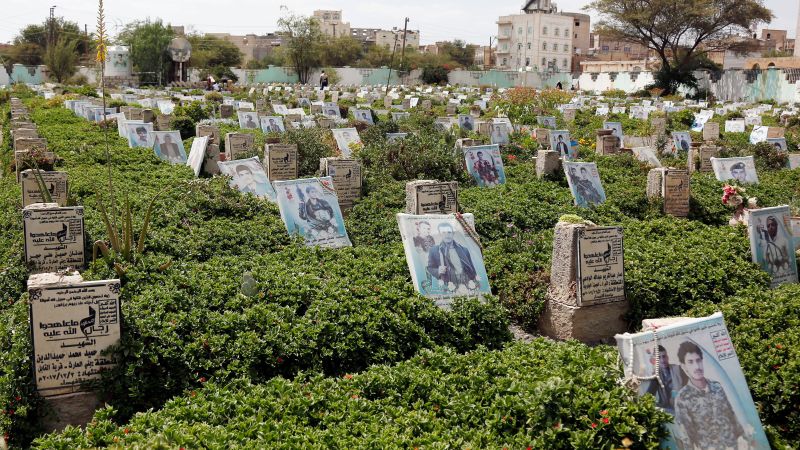 Editor’s Note: A version of this story first appeared in CNN’s Meanwhile in the Middle East newsletter, a three-times-a-week look inside the region’s biggest stories. Sign up here.

After a rare six months of relative calm, Yemen’s warring sides last week failed to renew a truce deal, with calls from the United Nations for an extension falling on deaf ears.

With one side backed by Iran and the other by Saudi Arabia, it remains to be seen whether the US will support its Middle Eastern ally after last week’s whopping oil cut – seen as a snub from the oil-rich kingdom to the Biden administration ahead of the US midterm elections.

The country’s Iran-backed Houthis and their rival Saudi-led coalition had agreed on a nationwide truce in April, the first since 2016. The two-month truce was renewed twice but came to an end last week over eleventh-hour demands put forward by the Houthis with regards to public sector wages.

At the last minute, the Houthis imposed “maximalist and impossible demands that the parties simply could not reach, certainly in the time that was available,” said US Special Envoy for Yemen Tim Lenderking in a statement, adding that diplomatic efforts by the US and the UN continue.

“The unannounced reasons [for not renewing the truce] are speculated to be that the Iranians asked the Houthis, directly, to help escalate things in the region,” said Maged Almadhaji, director of the Sanaa Center for Strategic Studies.

“Iranians and Houthis are in a difficult political position,” Almadhaji told CNN, adding that Iranians are under immense pressure amid raging protests at home and might be trying to keep Gulf rivals at bay by keeping them occupied with Yemen’s conflict.

The few months of ceasefire were a breath of fresh air for millions of Yemenis who, in the last seven years of conflict, were driven to “acute need,” the UN said. The peace period saw the monthly rate of people displaced internally dip by 76%, and the number of civilians killed or injured by fighting lowered by 54%, said the UN last week.

Yemen has been described by the UN as the world’s biggest humanitarian crisis.

Lenderking said that some aspects of the initial truce are still being upheld, such as relatively low violence, continued fuel shipments that can still offload into the Houthi-held Hodeidah port as well as resumed civilian-commercial flights from Sanaa airport. But the risks are very high.

The Houthis have already warned investors to steer clear of Saudi Arabia and the United Arab Emirates as they are “fraught with risks” – a message seen as a direct threat that the Iran-backed group is ready to strike once again.

“With the Houthis, it is always risky not to take their threats seriously,” Peter Salisbury, consultant at International Crisis Group, told CNN.

Yemen’s Iran-backed Houthis have previously launched attacks on the oil-rich countries, mainly targeting oil fields and key airports. In March, Houthis claimed responsibility for an attack on an Aramco oil storage facility in Jeddah. And in January, they said they were behind a drone strike on fuel trucks near the airport in Abu Dhabi.

Saudi Arabia has previously sounded alarms to its powerful US security ally over these attacks, criticizing the Biden administration over what it perceived as waning US security presence in the volatile Middle East.

Security agitation among Gulf monarchies was exacerbated by US nuclear talks with Iran earlier this year, where the possibility of lifted economic sanctions posed the risk of an emboldened Tehran that, it was feared, would, in turn, further empower and arm its regional proxies – predominantly the Houthis.

But the Houthis are already arguably emboldened, said Gregory Johnsen, a former member of the United Nations’ Panel of Experts on Yemen.

“I think Iran would like nothing better than to leave the Houthis in Sanaa on Saudi’s border as check against future Saudi behavior,” Johnsen told CNN.

Saudi Arabia’s strongest security ally has been the US, and traditionally the two countries’ unwritten agreement has been oil in exchange for security – namely against Iranian hostility.

But now, as Saudi Arabia defies the US with its latest OPEC oil cut, the two countries’ friendship is under increased strain. And with already existing reluctance in congressional politics to increase military support to Saudi Arabia, it remains unclear whether the US will respond with swift support to its Middle Eastern ally should violence flare, said Salisbury.

A number of US Democratic politicians have accused Saudi Arabia of siding with Russia, saying the oil cut should be seen as a “hostile act” against the US.

The threats made by certain US senators against Saudi Arabia after Wednesday’s OPEC oil cut – some of whom have called on US President Joe Biden to “retaliate” – are not credible, said Abdulkhaleq Abdulla, a political science professor in the UAE, adding that the response from the Biden administration “has been more restrained.”

It is in America’s interest to protect Middle Eastern oil producers, Abdulla told CNN, especially as supply tightens amid the Ukraine war and stalled nuclear talks with Iran.

“At this moment in history, America needs Saudi Arabia, needs the UAE, just as much as we need them for security purposes,” Abdulla said.

US policy toward Yemen has in recent years been in disarray, analysts say. The Obama administration first backed the Saudi-led coalition in 2016, but levels of support later changed as evidence emerged of civilian casualties in the Saudi-led air campaign.

Saudi Arabia enjoyed extensive support for its Yemen policy during the Trump administration. In late 2019, Biden promised to make the kingdom a pariah and, a little over a year later, he slashed US support for Saudi Arabia’s offensive operations in Yemen, “including relevant arms sales.”

The US continues, however, to sell weapons to Saudi Arabia through the loophole of “defense.”

The Biden administration last August approved and notified Congress of possible multibillion-dollar weapons sales to both Saudi Arabia and the UAE, citing defense against Houthi attacks as a legitimate cause for concern.

“Now, the US is frustrated with Saudi Arabia and the UAE, while it has no leverage with the Houthis,” said Johnsen. “The US has been lost at sea for the past year and a half when it comes to a Yemen policy,” he added, labelling it a situation largely “of its own making.”

While there is pressure within the US to sternly react to Saudi Arabia’s energy policies, it is yet to be seen how the US will respond to the developments in Yemen, where some say Washington would be wise to uphold its security guarantees.

“I don’t think it is in the best interest of America to reduce their military assistance to Saudi Arabia,” said Abdulla. “If they do, it will backfire on America more than many of these senators would imagine.”

At least 185 people, including at least 19 children, have been killed in nationwide protests across Iran since September, said Iran Human Rights (IHR), an Iran-focused human rights group based in Norway, on Saturday.

Now in their third week, protests have swept across Iranian cities following the death of 22-year-old Mahsa Amini, who died after being arrested by morality police and taken to a “re-education center” for not abiding by the country’s conservative dress code.

Here is the latest on this developing story:

An Israeli soldier has died following a rare shooting at a military checkpoint in East Jerusalem on Saturday, the Israel Defense Forces said. The attack comes after a violent two days in the occupied West Bank where Israeli forces killed four Palestinians, Palestinian authorities said.

One rocket was launched at a base housing US and coalition troops in Syria on Saturday night, according to US Central Command. No US or coalition forces were injured in the attack, and no facilities or equipment were damaged, CENTCOM said in a statement.

Before clicking enter on your Google search today, take a minute to check out today’s ‘Google Doodle.’ Standing by a library and a lighthouse is prominent Egyptian historian Mostafa El-Abbadi, who would have turned 94 today.

Hailed as “champion of Alexandria’s Resurrected Library” by the New York Times, he was the key player in resurrecting the Great Library of Alexandria.

The son of the founder of the College of Letters and Arts at the University of Alexandria, El-Abbadi’s love for academia came at a very young age.

El-Abbadi sought to restore the glory of the “Great Library” which disappeared between 270 and 250 A.D. – and he succeeded.

Combined efforts by the Egyptian government, UNESCO, and other organizations led to the opening of the Bibliotheca Alexandrina on October 16, 2002.

Despite being the main driver of the project, El-Abbadi was not invited to the ceremony after he became a critic of how the scheme was handled by the authorities.

“It became the project of the presidents, of the people who cut the rope, the people who stood on the front stage, and not of Mostafa El-Abbadi,” said Prof. Mona Haggag, a former student of El-Abbadi and head of the department of Greek and Roman archaeology at the University of Alexandria, according to the New York Times.