Vitali Klitschko, mayor of Kiev and former heavyweight boxer, says ‘we prepare for any case’ over tension with Russia 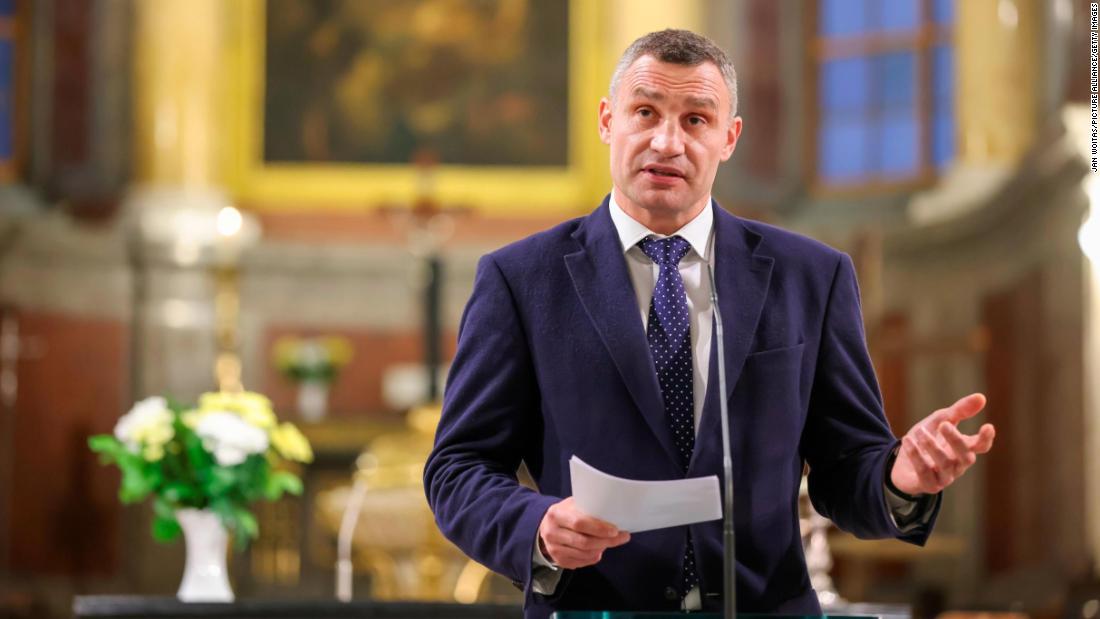 “If escalation goes up … We have to be ready to defend our independence and integrity of our country — and civil defense also have [sic] to be prepared,” Klitschko told CNN’s Lynda Kinkade on “Connect the World” Wednesday.

“We hope this never happens, this [is] worst case, but we have to be prepared,” the former world heavyweight champion added.

There has been months of tension near the Ukraine-Russia border, where more than 100,000 Russian soldiers have massed.

Klitschko said he is “worried” about Russian military forces at the border but says it is a possibility that what is being witnessed is merely a matter of optics, calling Russian tactics a “muscle game.”

Russia has not committed to de-escalate after two rounds of diplomatic talks this week, Deputy US Secretary of State Wendy Sherman said Wednesday.

Moscow is demanding security guarantees from the US and NATO, including a binding pledge that NATO won’t expand farther east and will not allow Ukraine to join the military alliance — something NATO is unwilling to do.

During Wednesday’s roughly four-hour meeting — which went on longer than scheduled — Sherman said that the US and its NATO allies made clear that Russia’s demand Ukraine never be permitted to join NATO was a non-starter.

The talks with the NATO-Russia Council is the second of three sets of meetings this week. They are sandwiched between Monday’s US-Russia talks and Thursday’s meeting between Russa and the Organization for Security and Cooperation in Europe.

Klitschko criticized the talks in Switzerland and Belgium for not including Ukraine at a high level and called it a “geo-political” game.

“Everybody is talking about Ukraine, without Ukraine,” Klitschko said.

“Without weapons delivering to this region, without financial support, without propaganda, this conflict will never, ever happen. Everything happens under control of [the] Russian Federation,” the former boxer said.

Sherman called it “hard to understand” how Russia could feel threatened by Ukraine when it has the largest conventional military in Europe.

Before entering politics, Klitschko was a world champion heavyweight boxer, retiring with a record of 45 wins and just two losses.
He announced his intention to run for the country’s presidency in 2015, but withdrew his bid and instead endorsed billionaire Petro Poroshenko, who served from 2014-2019 before being defeated by incumbent Volodymyr Zelensky.
Klitschko considers Zelensky a rival, and has accused the President of sending state security agents to his home to put political pressure on him. The state security agency denied having taken action against him.
Before the 2014 Russian annexation of Crimea, Klitschko was a key opposition leader during protests against its neighbor’s invasion.

“In 2014 Ukraine decided to take a European direction of development of our country. It is not [the] Russian Federation and Mr. Putin is not happy with this decision because his idea [is] to rebuild [the] Soviet Empire,” said Klitschko, referring to the Russian President.

“We don’t want to be back to [the] USSR. We see our future as [a] democratic European country.”

Known as Dr. Ironfist when he boxed due to his doctorate in sport science, Klitschko stands at an imposing 6 feet, 7½ inches.

His brother Wladimir, five years his junior, was also a world champion, and retired in 2017 after winning 64 of his 69 fights and retaining his heavyweight title for over nine years.

Klitschko is serving his second term at the helm of Kiev.