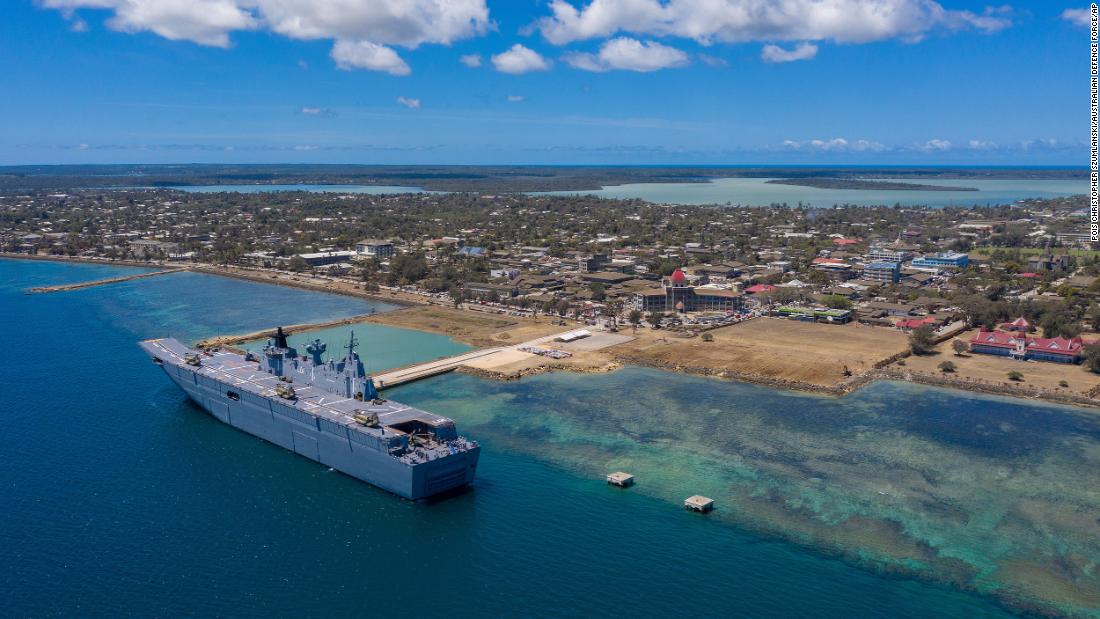 Two positive cases were discovered among front line workers at a port in the capital Nuku’alofa, where aid continues to flow in to help with recovery efforts, Tonga’s Prime Minister Siaosi Sovaleni announced in a press conference, according to local media Matangi Tonga.
Tonga was one of only a small number of countries not to report a single Covid infection, having closed its borders in March 2020. In November, 2021, a traveler flying from New Zealand tested positive but was picked up in the country’s quarantine hotel system. Still, Tonga went into lockdown following that case.

The lockdown will start at 6 p.m. local time on Wednesday and will be reviewed every 48 hours, said the Prime Minister.

The potential outbreak couldn’t come at a worse time for the island nation of 100,000 people, which is struggling to recover from the massive January 15 eruption. Telecommunications and internet — especially on the country’s more remote islands — have not been fully restored, businesses continue to be impacted and more than 1,500 people remain displaced as hundreds of homes were destroyed, according to the International Organization for Migration.
Aid agencies and Tongan politicians warned of potential food shortages after crops were ruined by the volcanic ash fall. A Unted Nations briefing last week said access to safe water remains a key challenge, as water sources such as reservoirs are contaminated.

Efforts are ongoing to clear ash, debris and distribute aid to affected communities, the UN said.

In a bid to keep the virus out of its borders in the wake of the eruption and tsunami, contactless aid deliveries were set up. Humanitarian aid and disaster relief — including water, sanitation kits, shelter and generators — on flights and ships from Australia, New Zealand, the United States and elsewhere, were delivered under strict guidelines to ensure no contact between crews and ground staff.

Tongan authorities said they are investigating which ship the virus could have come from.

“The most important issue at the moment … is for us to slow down and stop those who have been affected,” said Sovaleni, according to Matangi Tonga.

He added that boats traveling between the country’s roughly 170 islands — of which 36 are inhabited — will be stopped in order to track and prevent any spread.

“No boat will be allowed to go from one island to another. No more airplane flights to Ha’apai, Vava’u, or for them to come here to Tongatapu,” Sovaleni said.

The local positive cases show the complexities of launching a full scale recovery operation while trying to avoid the compounding disaster of a Covid outbreak on Tonga.

The eruption of the Hunga-Tonga-Hunga-Ha’apai volcano sent volcanic material surging as high as 40 kilometers (25 miles) into the atmosphere and generated tsunami waves up to 49 feet (15 meters) high that hit parts of the archipelago including the Pacific nation’s main island.

NASA said the eruption was hundreds of times more powerful than the Hiroshima atomic bomb, which was dropped by the United States on Japan during World War II. Experts said the eruption was likely the biggest volcanic event recorded since Mount Pinatubo erupted in the Philippines in 1991.
Prime Minister Sovaleni called it an “unprecedented disaster” and said a volcanic cloud extended to cover all of the country’s islands. Photos showed entire island communities blanketed by thick volcanic ash and debris.

Tonga has fully vaccinated more than 80% of its eligible population against the virus, according to the World Health Organization.