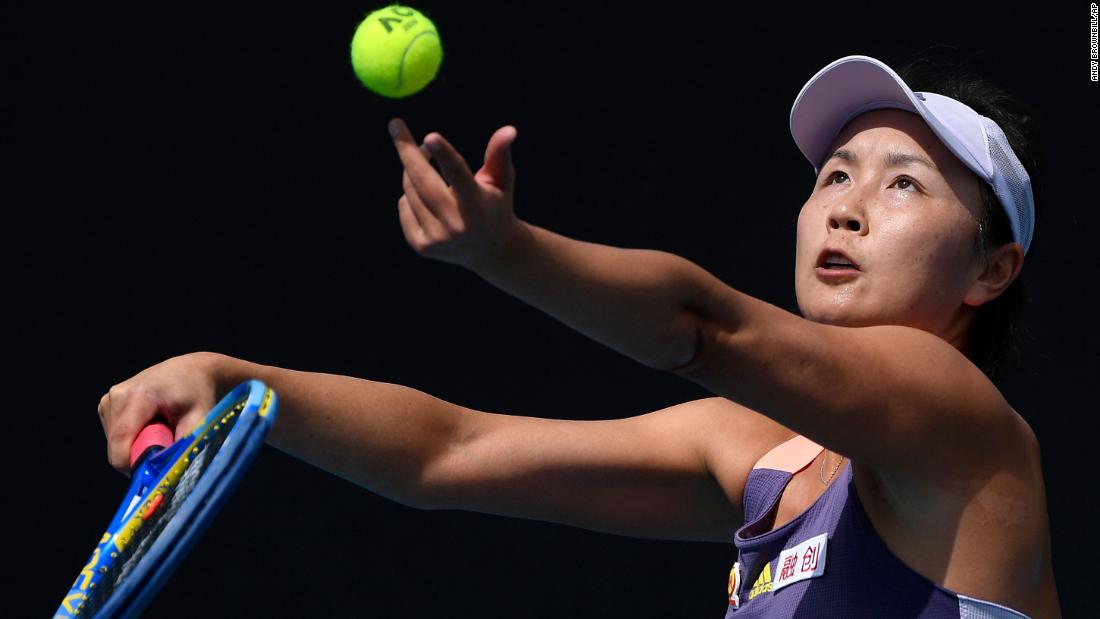 Peng Shuai, 35, a former Wimbledon and French Open doubles champion, on Tuesday accused retired Vice Premier Zhang Gaoli of pressuring her into having sex, according to screenshots of a since-deleted post from Peng’s verified account on Weibo, China’s Twitter-like social media platform.

CNN could not independently verify the authenticity of the more than 1,600-word post, and has reached out to Peng for comment, as well as China’s State Council Information Office, which handles press inquires for the central government.

In the post, which reads as an open letter to Zhang, she alleges a relationship over an intermittent period that spanned at least 10 years. Peng says she opened her heart to Zhang, who is now 75 years old.

“Why did you have to come back to me, took me to your home to force me to have sex with you? Yes, I did not have any evidence, and it was simply impossible to have evidence,” she wrote.

“I couldn’t describe how disgusted I was, and how many times I asked myself am I still a human? I feel like a walking corpse. Every day I was acting, which person is the real me?”

CNN could not reach Zhang, who served on the ruling Communist Party’s seven person Politburo Standing Committee, the country’s supreme leadership body, from 2012 to 2017 during Chinese leader Xi Jinping’s first term in power. He retired as vice premier in 2018.

In China, top leaders of Zhang’s standing remain unapproachable and private even after retirement, which makes reaching him to comment for this story virtually impossible.

China’s fledgling #MeToo movement has targeted academics, NGO workers and celebrities in the past — with varying results. But this is the first time it has reached the very upper echelons of the Communist Party.

“We must realize how remarkable it is for Peng Shuai to choose to speak out. Few people would have the courage to do that, because it could come at the expense of the safety of yourself and your family,” said Lv Pin, a prominent Chinese feminist now based in New York.

Adding to the political sensitivity, the scandal also came just days before a crucial meeting of party elites in Beijing, which is expected to pave the way for Xi Jinping to cement a third term in office.

As Peng’s allegations made waves online, censorship kicked in with a speed and ferocity unseen in any of the country’s previous #MeToo cases.

Her lengthy post, published shortly after 10 p.m. on Tuesday, was deleted in under 30 minutes. Screenshots of it had initially circulated widely across social media and in private chat groups, but soon they were censored too, along with other posts discussing the case.

Peng’s verified account, which has more than half a million followers, remains on Weibo as of Wednesday evening. But it has been blocked from searches. All comment sections under her previous posts have been shut down too.

In a sign of the unprecedented level of censorship, even a Weibo discussion page about tennis was closed for comments. And obscure references to the scandal were removed, too.

On Douban, China’s IMDB-like movie review website, the page of Korean romance TV show “Prime Minister and I” was censored, after users discussed Peng’s case in its review section.

The swift and thorough censorship stands in stark contrast to the response to other recent high-profile #MeToo cases, such as the rape allegations against Canadian-Chinese pop star Kris Wu.

That scandal was allowed to gain huge traction on social media, dominating top trending topics on Weibo for days, while state media amplified the accusation, censuring Wu for his moral decadence.

Wu was subsequently arrested on suspicion of rape. Before he was detained, Wu had denied the allegations on his personal Weibo account. His company said it was pursuing legal action against his accuser, calling the accusations “malicious rumors.”
Soon afterward, the government unleashed a sweeping crackdown on the entertainment industry, canceling a host of “misbehaving celebrities.”

Peng claimed in her post that she first had sex with Zhang more than 10 years ago, when Zhang served as the Communist Party boss of Tianjin, a coastal city to the southeast of Beijing. But Zhang broke off contact after he was promoted to the Politburo Standing Committee in Beijing, according to the post.

It did not explain the circumstances of their first sexual engagement.

Then, one morning about three years ago after Zhang had retired, the post alleges Peng was suddenly invited by him to play tennis in Beijing. Afterward, she writes, Zhang and his wife brought Peng back to their home, where Peng claimed she was pressured into having sex with Zhang.

“That afternoon I did not agree at first and was crying all the time,” Peng wrote. After dinner with Zhang and his wife, and following much persuading from Zhang, she relented, according to the post.

Like Zhang, his wife Kang Jie remains closely shielded by the government and could not be reached for comment.

“I was panicking and I was scared, and I agreed to it with my feelings for you from seven years ago,” the post said.

Peng said she then entered an extramarital relationship with Zhang, but she suffered “too much injustice and insults.” She claimed they got into a quarrel last week, and Zhang refused to meet her and disappeared.

Peng said she did not have evidence to prove her allegations, and claimed Zhang was always worried that she would record things.

“I know that for someone of your eminence, Vice Premier Zhang Gaoli, you said you were not afraid. But even if it’s just me, like an egg hitting the stone, a moth flying into flames, courting self-destruction, I would tell the truth about us,” she wrote. CNN cannot independently verify Peng’s claims.

Information surrounding the personal lives of senior Chinese officials is typically shrouded in secrecy, with even some of the most basic biographical information considered taboo. Under Xi, however, the supposed extravagances and misdeeds of some disgraced officials caught up in his anti-corruption campaign have been made widely public, providing a rare window into their private lives.

Despite the censorship, many social media users have voiced support for Peng, often in vague terms.

“How desperate and helpless she must have been,” posted a popular tennis blogger with more than 200,000 followers. “Hope you stay safe.”

Both posts were later deleted.

Sexual assault survivors have long faced strong stigma and resistance in China, at the official level as well as among the public. But in recent years, a growing number of women have rallied around victims who spoke out, as the #MeToo movement gathered steam.

Lv, the feminist activist in New York, said Peng sparked wide public sympathy partially because how successful she has been in her professional career.

In 2013, Peng won the doubles championship at Wimbledon with her partner from Taiwan. In 2014, the duo won the French Open double titles. Peng was also a former US Open semi-finalist.

“She is a truly outstanding woman, the glory of China, a world famous person. Even women like her would be trapped in a predicament like this,” Lv said. “This shows just how many hurdles Chinese women have to leap over on their pursuit for equality and independence.”

“Everybody is worried about her. Nobody knows what would happen to her. I think public attention to the case is her biggest protection,” she added.