How an Indian company is transforming palm leaves into tableware 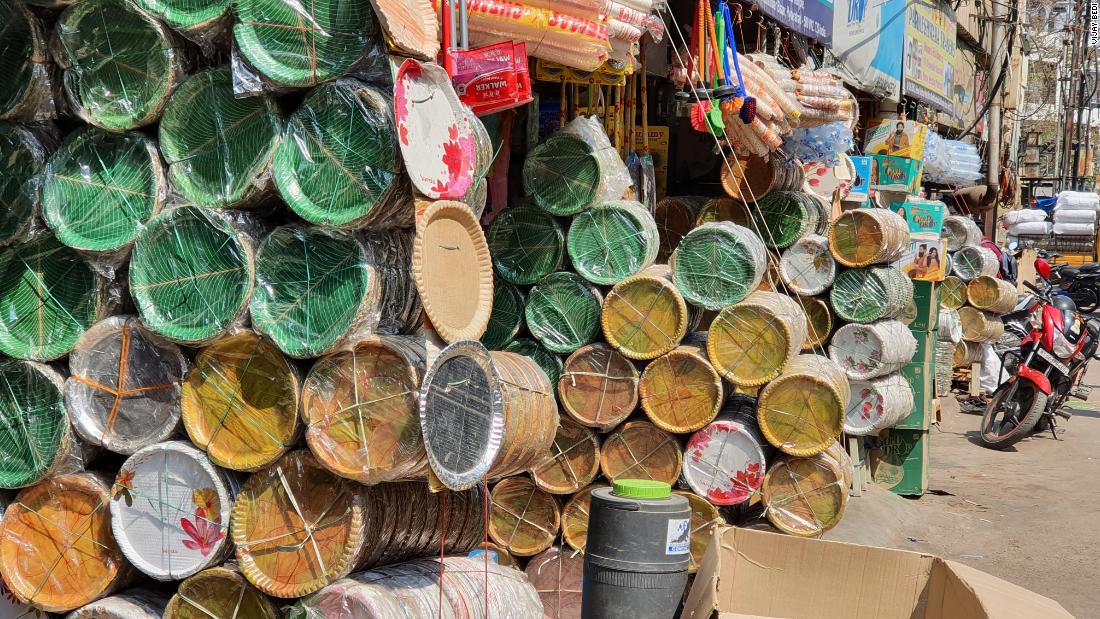 In the shade of the awning, customers eat standing up. They’re perhaps unaware that the paper plates they’re using are made of palm leaves.

The plates are produced by Bollant Industries, a local company that makes eco-friendly and disposable products and packaging from the fallen leaves of areca, a species of palm, as well as recycled paper.

“I call myself a waste person, because I really love waste,” CEO Srikanth Bolla says. “I want to recycle all the waste that I can in this world”

Now aged 30, Bolla, who has been blind since birth, founded the company in 2012 to pioneer sustainability and to provide jobs for people with disabilities. His company currently employs around 400 people, a quarter of whom have disabilities, Bolla says. “Our core vision is to employ as many people as possible who are at the margins of society,” Bolla says.

His efforts have attracted attention: In 2021, the World Economic Forum named Bolla one of its Young Global Leaders and a Bollywood biopic about him starring actor Rajkummar Rao is in the works.
Valued at $65 million, with funding from investors including Indian industrialist Ratan Tata, Bollant Industries operates seven manufacturing plants, producing hundreds of tons of products each month, ranging from tableware to packaging.

It’s part of a wider shift in India, as the country transitions away from single-use plastic to embrace more sustainable alternatives.

On Indian Independence Day in 2019, Prime Minister Narendra Modi pledged to phase out single-use plastic.
That ban, targeting plastics that have “low utility and high littering potential,” is slated to take effect this summer. It will prohibit the manufacture and import of plastic ear buds, plastic flags, and lightweight plastic bags and cutlery, among other items.
India’s plastic waste problem has grown in recent times. The country’s Central Pollution Control Board says that per capita plastic waste generation in India has almost doubled in the last five years. According to the United Nations Development Program in India, the country generates 15 million metric tons of plastic waste each year.

Critics of the single-use plastics ban, however, cite a poor recycling infrastructure, relative lack of plastic alternatives, and enforcement challenges as potential barriers to success.

Priti Mahesh, the chief program coordinator at Toxics Link, an environmental research and advocacy NGO in Delhi, says, “Yes, there’s a ban, but has there been any concrete measure to identify alternatives [to plastic]? And what is done to enforce this ban on the ground will be a question.”

For Bolla, an outright ban on single-use plastics is not the best solution. He says that subsidies are needed to encourage manufacturers to develop new alternatives.

“Plastic is such a versatile, flexible material,” he says, “So we should shift to making plastic using biodegradable polymers. This is the only way we can tackle plastic pollution.”

“We are ready for the big shift”

To make its plastic alternative products, Bollant purchases fallen areca leaves collected by farmers in the neighboring state of Karnataka and acquires used paper from local paper mills. At its manufacturing unit, staff operate hand presses to transform the leaves into cutlery and tableware, and the used paper into colorful plates.

Bollant sells its products to around 200 small and medium enterprises, like Prahalad Tiffin Point, across India. Bolla says he hopes to export his line of products to the US and Europe in the future.

Bollant is not the only Indian company innovating in this space. Delhi-based Ecoware converts agricultural waste like sugarcane residue into compostable tableware, and Biogreen in Bangalore manufactures biodegradable bags derived from corn starch.
These startups are part of an expanding market. According to market research firm Valuates Reports, India is expected to be the fastest-growing market for biodegradable plastics, anticipated to grow to almost $9 billion globally by the end of 2025.

Bollant Industries is currently expanding its range and developing a biodegradable product which can be used, instead of plastic, to coat and waterproof paper products. “We are ready for the big shift,” says Bolla.