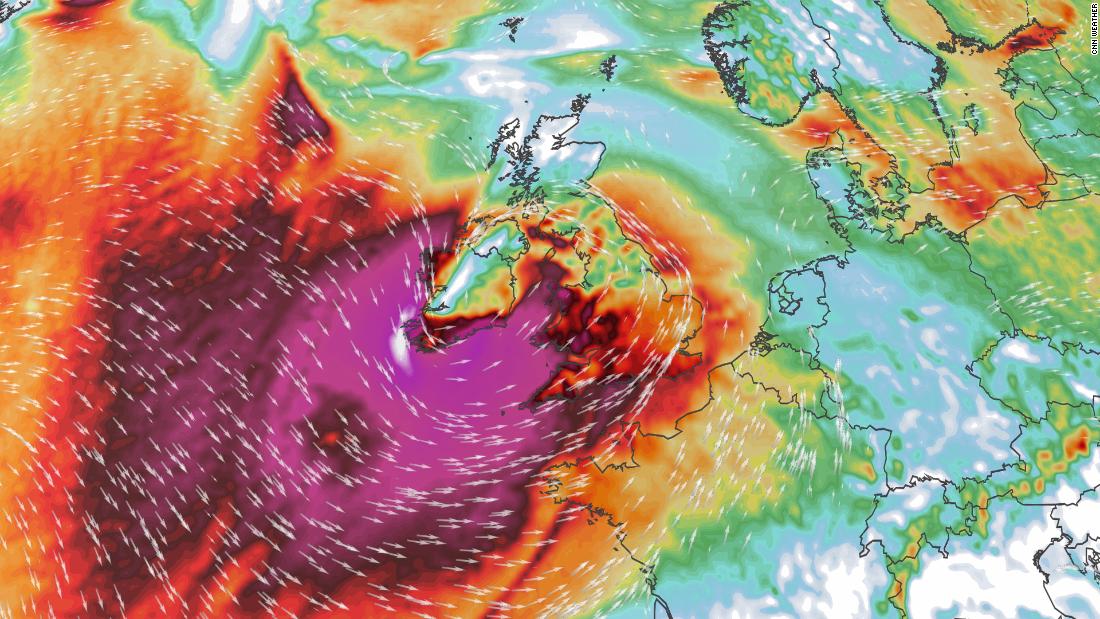 On Thursday, the UK’s weather service, the Met Office, issued the rare red alert — the highest weather warning category in the UK — warning that Eunice is forecast to bring “significant and damaging” gusts of up to 90 mph and threaten life.

It could also bring high waves and coastal flooding in the west, southwest and south coast of England, the Met Office said.

The warnings come as thousands of people remain without power in the UK’s north after Storm Dudley brought down trees and cut households from the grid.

Peter Inness, a meteorologist at England’s University of Reading, said that the back-to-back storms had formed as a result of a strong 200 mph jet steam blowing across the Atlantic Ocean. It is not unusual to see “two or more damaging storms” form in quick succession, he said in a statement.

But what makes Eunice potentially “rare” and more potent is that it could evolve into a “sting jet” — a “narrow, focused region of extremely strong winds” amid a “larger area of strong winds.”

The Met Office is urging people to only travel if “necessary” and warned drivers that road closures could be in place on Friday. People across the UK should also secure outdoor furniture and bins, and should avoid parking near trees.

“It’s developing out in the Atlantic at present, [and] it’s heading directly for the UK so to speak,” he said. “It will clear out of the UK over the course of Friday and travel towards Denmark and the Scandinavian countries.”

Vautrey said that, while it was “too early” to say whether storms Dudley and Eunice were “aided by climate change,” such strong storms were becoming more common.

“We’ve definitely seen the frequency of severe weather alter due to climate change,” he said.

“Global warming has led to changes in our weather patterns, and that is something we will increasingly have to take note of and be ready to deal with in the future.”

Hannah Cloke, a professor of hydrology at the University of Reading, warned people not to take the red alert “lightly.”

“Red means you need to act now because there is an imminent danger to life,” she said in a statement.

“Winds of 70 mph will uproot trees, which can block roads and crush cars or buildings. They can pick up roof tiles and hurl them around. If you’re hit by one of those you will be seriously hurt or killed. Wind that strong will sweep people and vehicles off streets, and topple electricity lines.”