Cuba protests: They dared to protest last July. Now these Cubans are facing 30 years in jail 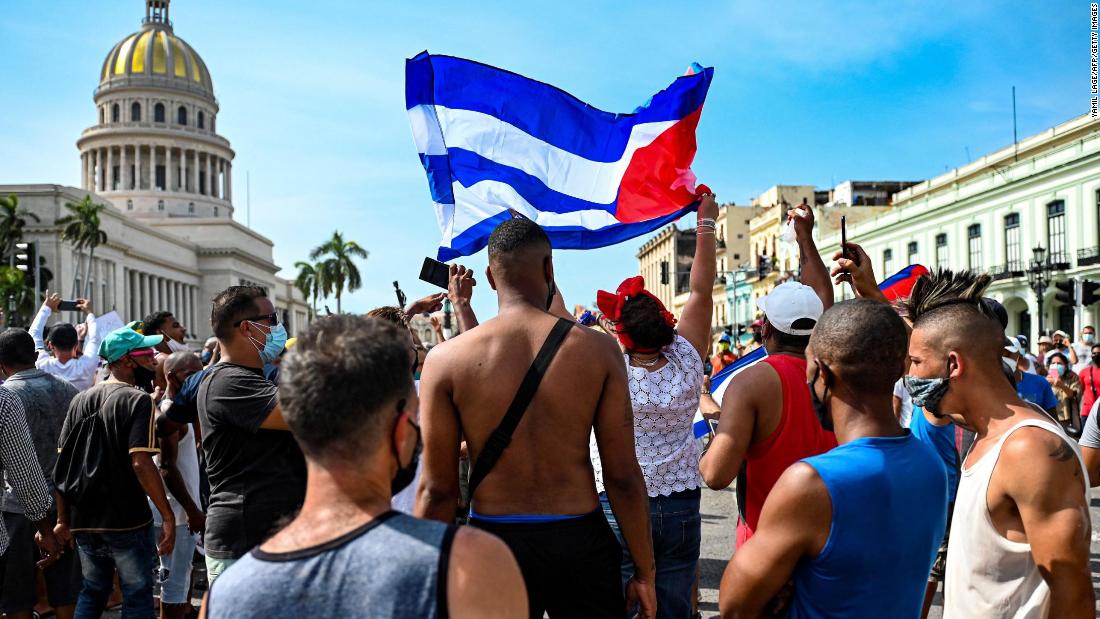 Like so many other businesses, the small cafeteria she and her husband ran was shuttered because of the Covid-19 pandemic. Worsening food and medicine shortages had left many store shelves in Cuba completely bare. The government’s adoption of a plan to upend Cuba’s dual currency system meant those without access to remittances from abroad were at an even greater disadvantage.

“There was no medicine, nothing. And on top of that they sell everything in a currency that most Cubans don’t have,” Vázquez said referencing the new Freely Convertible Currency, or MLC, a currency which comes on prepaid cards.

“I lived next to a store where they sell things in the hard currency and I can’t even go buy a lollipop for my kids. Everyone was in great need.”

Increasingly desperate and connected via mobile networks, Cubans organized their first protests in San Antonio de los Baños on July 11 in protest of power outages in the midst of the sweltering summer heat following months of frustration over shortages and pandemic-related restrictions. Quickly the protests spread across the island, with Cubans openly defying the communist-run government — which blames Cuba’s economic woes on US sanctions — in a way not seen since the 1959 revolution.

In the city of Cárdenas, a two-hour drive east of Havana, where Vázquez lives, hundreds poured onto the streets to denounce the chronic shortages and a lack of freedoms. One of them was Vázquez’s husband, Daniel Joel Cárdenas Díaz.

Vázquez said her husband took part in the protests outside a state-owned gas station near their home, but was too afraid to enter the store where police say looting took place. When police arrived and began clashing with demonstrators, Vazquez said her husband retreated back to the home they shared with their two-year old twin boy and girl.

“I even said, ‘You didn’t grab anything for the kids — not even a snack?'” she said.

Two days later, after police had quelled the protests across much of the island, Vázquez said that police and Cuban “black beret” special forces appeared outside the couple’s home and began battering down the door.

Vázquez managed to record two brief videos with her phone as police forced their way into the home, guns drawn. She says she hid the phone between her legs to keep it from being taken and sheltered with her young children as police fired at her husband. She said that one of the rounds grazed the back of his head.

“When I saw him on the floor they were hitting him with a baton,” she said. “He was on hurt on the floor covered in blood, in a huge pool of blood. I thought he was dead.”

While the video Vazquez took shows a pool of blood on the floor of her home, CNN was not able to independently confirm the extent of her husband’s injuries.

In a third video taken after police took her husband away, Vázquez shows the blood on the floor and cries to her neighbors who have gathered at her front door, “They have destroyed my house!”

Vázquez said she believes police raided their house as a case of mistaken identity. She said that police first accused her husband of helping to overturn a car in front of the headquarters of the city’s communist party.

Vazquez said her husband was not involved with that incident.

CNN has reached out to the government for comment.

After the harrowing video Vázquez took was aired by the international press, Cuban-state run media released images of Cárdenas being calmly being questioned by police to refute what they called “fake news” reports that he had been critically wounded. The national news program also showed security camera video that state media said showed Cárdenas outside the gas station after it had been damaged.

In December, Cárdenas was tried and convicted of sabotage and public disorder. He now faces a 15-year sentence in prison, Vázquez said.

“These people didn’t kill anyone, they didn’t put bombs,” Vázquez said. “They threw rocks and asked for liberty, that was all. And they are being sentenced to more than 20 years in prison.”

According to a statement released by Cuban prosecutors, 790 people have been charged for their involvement in the protests, with 172 people already convicted. The trials are likely the largest mass trials to take place in Cuba since Fidel Castro took power in 1959 and presided over televised trials of hundreds of officials of the deposed Batista regime.

Despite widespread calls for amnesty for the July protesters, the government has vowed to harshly punish those who took part in the spontaneous uprising.

“It has been corresponded to us to judge those who, acting as pawns of the subversive onslaught and attempted destabilization by the enemies of the revolution, have committed vandalism (and) violent aggression against authorities and officials,” Cuban Prime Minister Manuel Marrero Cruz said at a government ceremony in January attended by the Minister of Justice, judges and other high-ranking officials, according to the state-run media.

But human rights observers say many of the accused protestors have not had adequate access to lawyers or been able to mount a defense as they face decades-long prison sentences.

“This is a level of massive, systematic criminalization of demonstrators that we have very rarely seen in Latin America in recent decades,” Juan Pappier, a senior Americas researcher at Human Rights Watch, told CNN. “It’s very clear the message the Cuban government is trying to convey is that what happened in July is absolutely forbidden and cannot happen again.”

In a brief phone call from El Guatao, the women’s prison in Havana where she is being held, protestor Mackyani Yosney Román Rodríguez decried the “awful” conditions of her incarceration.

Román said she was arrested in July after clashes with police, whom she blamed for causing the violence in the working-class Havana neighborhood of La Guïnera where she lived.

“It was terrible, the police arrived and just started shooting,” she said.

Román, 24, said she is charged with a long list of crimes, including sedition, and faces 25 years in jail. Two of her brothers also face lengthy prison sentences for allegedly taking part in the protests, she said.

CNN has reached out to the government for comment.

The protests — and now the trials of hundreds of protestors — mark a before and after in the island’s history for many Cubans.

Some of the protesters’ family members say regardless of the mass trials and harsh sentences, anti-government resentment will continue to simmer.

“When will our kids see him again? When they are adults,” Marbelis Vázquez Hernández said from her new house, a simple structure made from cement blocks on a rough, dirt road that she moved to with her children following her husband’s arrest.

She said she was too traumatized by seeing police beat her husband to remain in their old home. Even though it seems likely her husband will spend years in jail, Vázquez said she will appeal his case and continue to advocate for his release. She says she will not be intimidated by the government’s campaign against the protesters.

“I am not afraid, they have made me stronger,” she said.