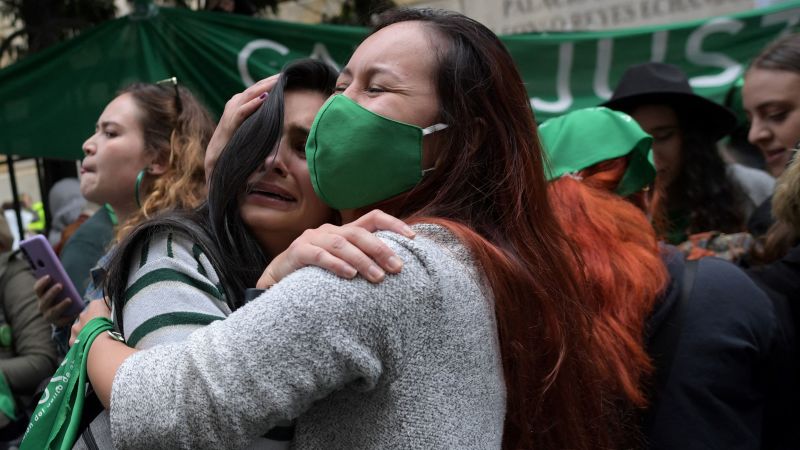 Colombia became the latest country in Latin America to partially decriminalize abortion on Monday, marking a major victory for the nation’s feminist movements and reflecting a wider shift in views toward the procedure across the region.

The country’s Constitutional Court ruled in favor of legalizing abortion up until 24 weeks of a pregnancy, the supreme tribunal announced in a statement.

Abortion rights advocates reacted on Monday with marches in Bogota, the capital, and other major cities, having campaigned for two decades to remove abortion from the country’s criminal code.

“We knew this was not an easy fight, but at some point it had to happen,” said Mariana Ardila, a women’s rights activist and lawyer who signed the petition to decriminalize abortion. “Of course, while we were hoping for full decriminalization, and we will keep fighting for it, this is an important step forward for us,” Ardila told CNN, surrounded by women’s rights activists outside the court on Monday evening.

Abortion in Colombia has only been legal under three circumstances: when the life or health of the woman is at risk, if the fetus has malformations that make it nonviable or when the pregnancy is the result of rape or incest.

Now, women seeking an abortion up to the 24th week of their pregnancy will not face prosecution, the court ruled. Abortion after 24 weeks remains illegal, except if one of those three circumstances is present.

Since 2006, women seeking to end a pregnancy outside of those circumstances could face up to 54 months in jail under the Colombian penal code. While jail sentences have been rare, abortion rights advocates say criminalization of the practice creates a climate of fear and suspicion between patients and the medical class, who often feel forced to report abortions to the authorities for fear of participating in a crime.

Hundreds of women in Colombia are investigated for receiving illegal abortions each year. Others resort to clandestine abortions, a pervasive and often unsafe practice across the rest of the region.

Even women who are medically entitled to an abortion have faced barriers to access treatment in Colombia. Alejandra Gutierrez, a 23-year-old cancer patient from Bogota, told CNN that her case had to go through a panel discussion between a gynecologist, a hematologist, and a psychiatrist before her request was approved.

Throughout the process, she says she received little clear information about the risks of terminating the pregnancy or carrying the baby to term amid chemotherapy treatment.

Only after three weeks and numerous interviews was she allowed to end the pregnancy. “I felt so vulnerable, so small, and I still feel I never really got to the bottom of it. My fear was that it started to grow, inside my belly, and then it was too late, I was scared to death.” she told CNN in November.

Beyond the law, pregnant women in Colombia have faced bureaucratic delays, negative attitudes and medical staff who refuse to carry out the procedure under a “conscientious objection” clause.

In Latin America, where the Catholic church remains a major influence, society has long been hostile to women seeking abortion. However, two landmark rulings in Argentina and Mexico signal a growing shift in thinking about the procedure.

In September, Mexico’s Supreme Court unanimously ruled that penalizing abortion is unconstitutional, a decision expected to set precedent for the legal status of abortion nationwide. And in December 2020, Argentina’s Senate voted to legalize abortion up to 14 weeks into a pregnancy, making the country the largest nation in Latin America at the time to legalize the practice.

Nations where the procedure is legal often become vital destinations for women seeking care that they cannot receive in their home countries. Cuba, Uruguay, French Guiana and Guyana, also allow elective abortions, according to the Center for Reproductive Rights.

Brazil, the largest country in Latin America, only allows abortion if the person’s life is at risk or when the pregnancy is the result of rape. El Salvador, the Dominican Republic, Haiti, Honduras, Nicaragua and Suriname ban abortions in nearly all circumstances. In Costa Rica and Guatemala, abortions are only permitted if it’s to preserve the person’s health or help save their life. In Panama, the procedure is only allowed to preserve the mother’s health or life in the case of rape, or fetal malformation. Just last week, Ecuador’s Congress approved a bill allowing access abortions – if the pregnancy is the result of rape – up to 12 weeks of pregnancy for women in urban areas and up to 16 weeks for minors and adults in rural areas. However, the bill still needs to be signed into law by Ecuador’s president, who has threatened to veto it.

In Colombia, one woman told CNN she was forced to leave the country in 2017 to seek an abortion after becoming pregnant at the age of 15. She requested that her name be withheld due to the sensitivity and stigma of the issue there.

“I was really scared, you enter in a state of total panic when it happens, how can you think with clarity about anything in that state?” she said. She was still in high school at the time.

However, her mother agreed to help her travel to Mexico City, where the practice was legal long before it become nationwide law. “I was lucky: my mother does not support abortion and was very let down, but she still had my back. She had a good job at the time, so we could afford flying to Mexico and staying there for a week to do it. But many others can’t do that,” she told CNN.

“We all know a woman who got an abortion, it’s just that nobody knows who she is. We don’t talk about it because it’s still a taboo, under wraps, but everybody knows it,” she said.

Social taboos and public shaming around the issue remain ongoing barriers to abortion education and access, according to abortion rights activists.

“This is also about changing mentality,” said Dr. Laura Gil, a gynecologist in Bogota who signed one of the petitions to Colombia’s Constitutional Court to change the law. “We are not trying to make people change their opinion about abortion – that is a question that is important only for women who are facing an unwanted pregnancy.

“This is about people understanding that regardless of their opinion, abortion is a right,” she said.