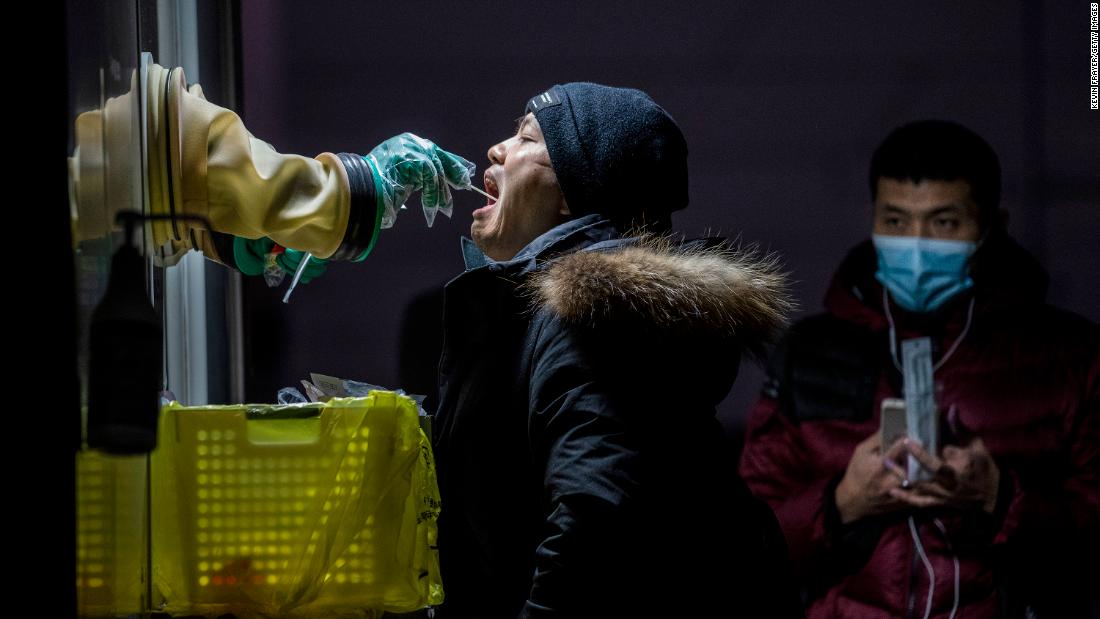 The Covid-19 variant has been cropping up across China in recent days, including in major port cities like Dalian and Tianjin, prompting restrictions that could upend business operations in those places. The rest of the world is also dealing with Omicron, but China is different because of how intent authorities are on preventing any widespread outbreak by locking down cities and curbing travel.
The strict approach has so far been effective: China has recorded far fewer Covid-19 cases than many other nations during the pandemic, and its economy was the only major one to grow in 2020.

Omicron, though, threatens to expose some serious flaws in that plan. The variant is much more transmissible than others, making it difficult to contain. And as the rest of the world learns to live with the virus, economists say China’s zero-tolerance strategy is likely to do more bad then good in 2022.

Goldman Sachs, for example, has just slashed its projection for Chinese economic growth in 2022 to 4.3% from 4.8%. That’s roughly half what they estimate last year’s growth rate to be. (China will report fourth quarter and full year GDP figures for 2021 on Monday.)

Those revisions come “in light of the latest Covid developments — in particular, the likely higher average level of restriction (and thus economic cost) to contain the more infectious Omicron variant,” Goldman analysts wrote in a research note Tuesday.

Morgan Stanley is taking a similar view that Omicron could mean the costs of a zero-Covid approach outweigh the benefits. Last week its analysts forecast growth of 4.9% in the first quarter, but suspect it could slow to 4.2% “should Omicron spread to other regions and lead to multiple city-wide lockdowns.”

The analysts cited a “deeper disruption to services” as a top risk for China, if the country extends containment measures to several cities. That would mark China’s most severe and widespread attempt to contain the coronavirus since April 2020, when it lifted its massive lockdown on Wuhan, the original epicenter of the virus.

Along with the country’s precarious services sector, which is already struggling because of sporadic Covid outbreaks and antivirus measures, Omicron could deal a blow to factories and supply chains, compounding the economic threat.
An outbreak of the older Delta variant forced the industrial hub of Xi’an into lockdown earlier this year, affecting production lines of global chip makers like Samsung (SSNLF) and Micron (MU).

And then there are the Omicron cases detected in major port cities. Ship congestion at Chinese ports has worsened recently as more cities implement strict Covid restrictions because of the outbreaks, or as they tighten testing policies ahead of the Chinese New Year holiday season starting January 31.

The Shekou terminal in Shenzhen, for example, has begun restricting truckers bringing in loaded containers. Starting Friday, truckers can only enter the terminal if they have bookings for export-bound containers on vessels arriving within three days, the operator said in a statement this week.

The restrictions echo those from last year, when several Chinese ports briefly shut down after infections were found amount dock workers. Those issues created backlogs of containers waiting to leave, and ships waiting to dock — and added to the pressure on strained global supply chains.

So far, there doesn’t appear to have been a lasting impact on trade. Customs data released Friday showed that exports jumped 21% in December from a year ago, exceeding expectations. The country’s trade surplus was $676 billion in 2021, an all-time high.

That indicates that China’s strategy might actually be helping: Export orders may have shifted to China from other developing countries because of the “Omicron damage to the global supply chain,” according to Zhiwei Zhang, chief economist for Pinpoint Asset Management.

Even so, there are risks — especially if China imposes a nationwide lockdown.

“Although China’s latest virus wave doesn’t appear to have dented exports much in December, media reports point to growing virus-linked congestion and delays at a number of major Chinese ports since the start of the year,” wrote Julian Evans-Pritchard, senior China economist for Capital Economics, in a Friday research note. “With cases popping up in even more port cities in recent days, including Dalian and Shanghai, the situation is likely to worsen in the near-term, pulling down shipments this month.”

Staying the course, at a price

China isn’t likely to let up on its zero-Covid approach for a while. One reason: the country’s Sinovac Covid-19 vaccine isn’t as effective as others against the variant, according to recent reports.

“The population has virtually no antibodies against Omicron,” wrote executives at Eurasia Group in a report published earlier this month. “Keeping the country locked down for two years has now made it more risky to open it back up.”

Along with concerns about the health of its population, a handful of significant, upcoming events will likely persuade Beijing to stay the course.

The country hosts the 2022 Winter Olympics in February, making the containment of Omicron important in the near term. Chinese President Xi Jinping is also widely expected to seek a historic third term in office when the Chinese Communist Party holds its 20th Party Congress in the second half of this year, underscoring the need for stability in the meantime.

Still, the economic cost of containing an aggressive variant could be great. Analysts at Nomura wrote this week that retail sales and other services could take a big hit if there are more lockdowns, adding that the benefits of zero-Covid are “likely diminishing while costs are rising.” They forecast GDP growth of 2.9% for the first quarter, and 4.3% for the entirety of 2022.

“It’s the opposite of where Xi Jinping wants his country to be in the run-up to his third term, but there’s nothing he can do about it,” they wrote in their forecast this month. “The initial success of zero Covid and Xi’s personal attachment to it makes it impossible to change course.”