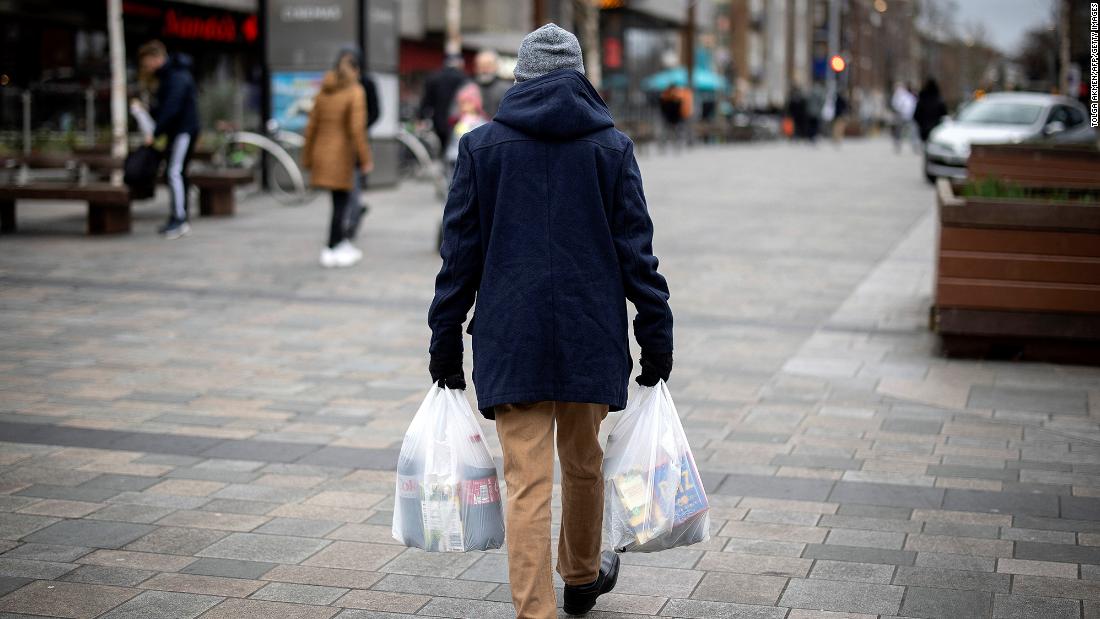 “Everything’s increasing,” she told CNN Business during a visit to The Boiler House, which provides discounted food, footwear and fuel vouchers from a red brick building on a public housing estate in east London.

Average worker pay suffered its biggest drop in more than seven years in the three months to January, falling by 1% over the same period a year ago once inflation is taken into account, the UK Office for National Statistics said on Tuesday. And the war in Ukraine has driven energy costs even higher — gasoline and diesel prices have soared to new record highs in recent days.

The Boiler House Youth and Community Space started its food pantry during the coronavirus pandemic. Unlike a traditional food bank, guests browse and shop for their own items, paying a £6.50 ($8.50) fee to receive about £35 ($46) worth of food and toiletries.

But the charity’s services have expanded to provide members with shoes and help paying their energy bills as many struggle with the most severe knock to their purchasing power in years.

Davina Mathurin, project officer for The Boiler House, summarized the dilemma many are facing.

“Do you either keep the house warm so [your] children don’t get ill?” she said. “Or do [you] buy food so they can eat and they’re not hungry?”

Millions of people’s fuel bills rose in October when Britain’s energy regulator increased its consumer price cap — the maximum suppliers can charge per unit of energy — by 12% after a global natural gas supply crunch pushed wholesale prices up to record levels.

On the day CNN Business visited in February, Mathurin had started referring some members to fuel voucher programs organized by charities that offer up to £49 ($64) to help with bills. Demand was high, she said.

Monique John, another regular visitor to the Boiler House, told CNN Business that she owns a smart meter. The device helps her conserve energy, but her money does not stretch nearly as far as it used to.

‘There’s just nothing left to give’

The worst is yet to come.

In April, the energy price cap will soar by 54% — its largest ever rise — burdening 22 million people with an annual bill of roughly £2,000 ($2,618). Inflation is also expected to peak above 7% and a new payroll tax to help fund health and social care will take effect.

The higher costs could push the number of “destitute” households — defined as those unable to afford basic necessities — up by a third to hit 1 million, according to analysis by The National Institute of Economic and Social Research.

Russia’s invasion of Ukraine last month pushed wholesale gas prices up even further as global markets panicked over whether sanctions would hit Russian exports. Analysts at investment bank Investec said Britons’ annual energy bills after October — the next time the price cap is adjusted — could rocket past £3,000 ($3,927) as a result.

“Children are feeling too scared to ask for the heating to be put on,” she added. “They’re really kind of taking on that stress that they’re seeing their parents go through. Feeling hungry and not asking for a snack.”

The government will try to ease the pain by cutting local taxes and allowing millions of Britons to spread the cost of their energy bills over the next few years.

A government spokesperson told CNN Business that it was “providing support worth around £12 billion ($16 billion) this financial year and next, to help households with the cost of living.”

The spokesperson added that the government would raise the minimum wage by more than £1,000 ($1,309) a year and hike a benefit claimed by people on low incomes by the same amount. Both will start in April.

Critics say the government’s response is inadequate and fails to target those who need it most.

Ian Allinson, a member of the executive committee at Manchester Trades Union Council, which organized a protest against higher costs in February, said the situation is “alarming.” He said the government’s plan to delay energy payments won’t help vulnerable people.

“We’re appalled when the main measure the government has announced [to bring down energy bills] is that we have to give ourselves a loan,” he told CNN Business.

“A lot of people are struggling with debt already. The idea that there’s then enforced further debt rather than any genuine help is just shocking.”

Angry Britons are taking to the streets. Protesters, and the opposition Labour Party, have called for a windfall tax on energy companies like BP (BP) and Shell (RDSA), which made billions in profit last year.

“It’s just scandalous that the government is choosing to not do something effective to support ordinary people but is happy to leave those mega profits for the companies that are inflicting this on us,” Allinson said.

At a north London church, piles of groceries are laid out in a grid on the floor of a small side building. Volunteers are packing the donated items into bags before driving them to people’s doors.

Cooking Champions, an organization which caters for charitable groups and local businesses, started its delivery service in April 2020 after the pandemic hit.

Annalisa Moseley is one of the first to receive her shopping. The mother-of-two said that without Cooking Champions, some weeks she would have no food. Thinking about what will happen after April is stressful, she said.

“It’s all on my shoulders sort of thing to make sure the kids are warm and fed and everything,” Moseley said. “It has been getting me down a little bit, but just got to carry on. Keep trying.”

Moseley receives Universal Credit — a benefit for people who are out of work or on low incomes. The government hiked payments by £20 ($26) a week during the pandemic, but that ended in October 2021. The benefit will increase by 3.1% in April, but that’s less than half the expected rate of inflation.

Rising wages can’t keep up either.

The Spring Community Hub, a food and clothes bank 15 miles to the south across London, runs another door-to-door delivery service. Lately, volunteers have helped increasing numbers of younger and more affluent people.

“When the actual money comes, it’s not enough,” she added.

September looms large for parents worried about the cost of school uniforms. Shirts, sweaters and jackets emblazoned with school logos — mandatory in the United Kingdom — can run into the hundreds of pounds for a single child.

One in 10 British families have fallen into debt buying items needed for school, according to a 2020 survey by The Children’s Society, a charity. That figure could grow in 2022 — clothes and footwear were the biggest contributors to inflation in the month to January, according to the Office for National Statistics.

Caroline Rice, who lives in Northern Ireland, is “dreading” the new school year. She is a member of Covid Realities, a research project documenting the experiences of low income families during the pandemic.

Back at The Boiler House, parents are turning up with their children to browse shelves of colorful sneakers, donations provided by charity Sal’s Shoes. Begum’s daughter rushes over to a pair of white and pink sparkly Converse and tries them on.

“With poverty there is that loss of dignity if you’re just effectively being handed handouts,” said CJ Bowry, the founder of Sal’s Shoes.

Its three pop-up stores around the country aim to give “families a shopping experience,” she said. “So they can visit these shops and try on shoes and choose shoes and see a selection of shoes — but they don’t have to pay.”

Sal’s Shoes has sent nearly 3 million pairs to 54 countries in its eight years, though more and more are being sent closer to home. The charity distributed 48,000 pairs around the United Kingdom in 2021, its highest number ever.

Bowry said she receives calls every day from school principals asking for support.

“We have headteachers who’ve done playground duty and then ring us because they’ve literally noticed children in their playground with the soles flapping off their shoes,” she said.

The Bank of England expects inflation to cool after peaking in April, but high prices will stick around.

For people who have taken on new debts and fallen behind on their bills, there will be a scarring effect that could last for years.

Research by the Joseph Rowntree Foundation last year found that 4.4 million low income households began borrowing or added to existing debts during the pandemic. Of that number, more than two thirds are behind on their repayments.

Joseph De-Ville, another member of Covid Realities, lives in Cornwall with his wife and three children. He got into debt a couple of years ago to pay for his mother’s funeral, and told CNN Business about the constant struggle to provide for his family.

“This is the parts of life that people aren’t seeing,” he said. “We’re locking it up into credit cards so we can cope, and then we’re struggling to pay the debts because [of] the interest rates — because we’re having to take high interest rate credit cards just so we can get by.”

For over a decade, real incomes and living standards for millions of Britons have dropped. For De-Ville, the rising cost of living is just the latest chapter of an extended crisis.

“Hardship is harder,” he said.