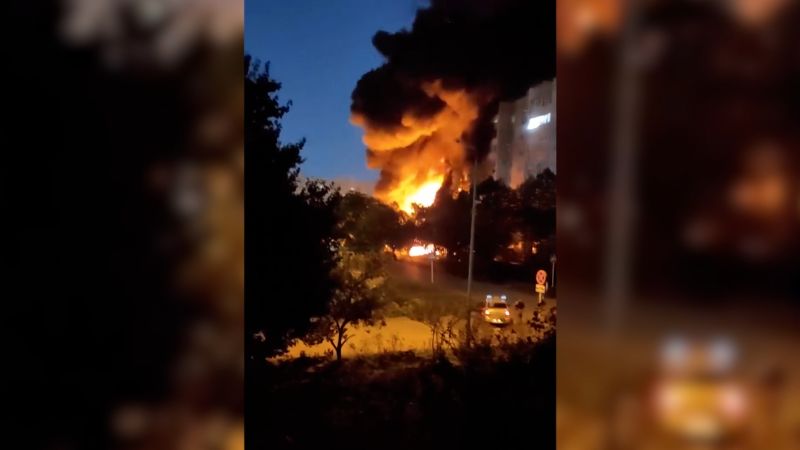 At least four people were killed and 25 others injured after a Russian SU-34 fighter jet crashed into a residential building in the western city of Yeysk during a training flight Monday, according to Russian state media and authorities.

The incident was due to one of the engines catching fire, reported RIA Novosti, which cited Russia’s defense ministry.

“According to the report of the ejected pilots, the cause of the plane crash was the ignition of one of the engines during take-off. At the site of the crash of the Su-34 in the courtyard of one of the residential quarters, the plane’s fuel ignited,” the ministry said in a statement to RIA.

The conditions of the ejected pilots are not clear.

Yeysk is a port town on the shore of the Sea of Azov and is separated from occupied Russian territory in southern Ukraine by a narrow stretch of the sea.

Images and videos of the crash’s aftermath showed smoke billowing and fire blazing in the residential area. A building, believed to house hundreds of people, was later engulfed in flames, say officials.

Russian President Vladimir Putin told authorities to provide all necessary assistance to the victims of the crash, the Kremlin said in a statement, adding that Putin has received reports from the ministers and the head of the region on the situation.

The fire, which raged through more than a dozen apartments in the multistory building, was later contained, said local officials.

“The remains of the aircraft have been extinguished. The evacuation of residents of nearby houses has been cancelled. The fire has been contained,” the head of the Krasnodar Krai region, Veniamin Kondratyev, said on his Telegram channel, citing a statement from the Ministry of Emergency Situations.

About 100 people have been evacuated from the building, local government security services told TASS.

The Russian Ministry of Emergency Situations told RIA the area of the fire caused by the crash was 2,000 square meters wide.

According to the head of the affected district in Yeysk, Roman Bublik, the residents of a nine-story building that caught fire will be provided with all the necessary support.

Earlier on Monday, an eyewitness told Russian state media TASS of the chaos that ensued after the crash: “Plane crashed in our city … Ambulances and firefighters are coming from all over the city, helicopters are in the air,” said the eyewitness.”