Russia is recruiting thousands of volunteers to replenish its ranks in Ukraine. Prior experience isn’t always required 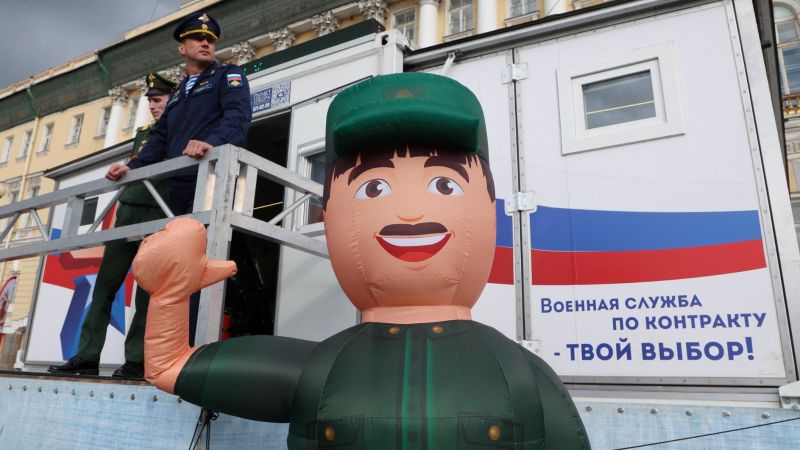 Across Russia, volunteer battalions are being formed to deploy to the war in Ukraine, joining the so-called “special military operation” declared by President Vladimir Putin in February.

From Murmansk in the Arctic Circle to Perm in the Urals and Primorsky Krai in the Russian Far East, the call has gone out, appealing to both the patriotism and the wallets of Russians.

In all, analysts assess that more than 30,000 volunteers might be mobilized to supplement Russian ranks depleted by five months of combat – between one-quarter and one-third of the force deployed to win the eastern Donbas region, where the majority of volunteers would likely be sent.

Putin has long resisted the idea of a general mobilization in Russia, and this spring’s call-up was similar to that in 2021. These battalions are one way to augment Russia’s military manpower without such a drastic step. They also appear to be focused on poorer and more isolated regions, using the lure of quick cash.

What impact these battalions may have is an open question. Chechen volunteer units have played an outsized role in the Donbas campaign, especially in Mariupol. But they are relatively well-equipped and have extensive military experience. The battalions being assembled elsewhere clearly do not.

Kateryna Stepanenko, Russia researcher at the Institute for the Study of War in Washington, says: “Some battalions will partake exclusively in combat support and combat support operations (such as logistics or signal battalions), while others will reinforce pre-existing military units or form combat battalions.”

But she adds: “The short-term training is unlikely to turn volunteers with no prior experience into effective soldiers in any unit.”

CNN has sought comment from the Russian Defense Ministry on the volunteer battalion program.

Stepanenko says the process is being driven from Moscow. “The Kremlin reportedly ordered all 85 Russian federal subjects (regions of the Russian Federation plus occupied Crimea and Sevastopol) to recruit volunteer battalions to avoid declaring partial or full mobilization in Russia.”

But the regions are expected to help fund the recruitment, which she says “places a heavy strain on regional budgets.” Krasnoyarsk in Siberia, for example, had to set aside about $2 million for the project, Stepanenko said.

The qualifications required for joining up vary from place to place. One online flier in Kazan in Tatarstan said: “We invite men under the age of 49 years who have previously served in the military and offer a contract for 4 months in your military specialization.”

Elsewhere, men up to the age of 60 with no criminal record are eligible. There is often no requirement of previous military experience listed in online notices.

The Perm posting – under the headline “A Job For Real Men” – seeks “courageous, daring, brave, self-confident, extraordinary, well-rounded patriots of our nation.”

According to the postings, about one month is allotted for training – not much for a situation in which recruits have little or no military experience. According to the Russian Defense Ministry’s standard policy, all recruits signing a contract must have four weeks of combined arms training. Whether that same regime is being extended to all volunteers is unclear.

Some of the volunteer battalions have already been through the Mulino training ground near Nizhny Novgorod, according to social media posts.

The volunteers’ contracts tend to be from four months to a year. They promise much higher wages than the average in the Russian regions. For example, the battalions being formed in Perm and the Western Russian region of Kirov offer an income starting from 300,000 rubles monthly (about $5,000), while in Bashkortostan, near the border with Kazakhstan, the minimum is 280,000 rubles. Bashkir Volunteers from Bashkortostan are promised an additional 8,000 rubles a day for combat operations.

An announcement circulating on social media channels in Bashkortostan said: “Over the summer you can easily earn about a million rubles!”

The average monthly wage in these areas is between 30,000 and 45,000 rubles, roughly one-tenth of what a volunteer may get if deployed to the front lines.

There are other perks, too. In Perm and Kirov, the children of volunteers are promised preferential admission to universities. Volunteers will be given the status of “combat veteran,” granting them a monthly stipend for life and discounts on housing and transport.

And there is a scale of compensation for battlefield casualties, in some instances more than 3 million rubles for serious injury. If a volunteer is killed, their family would receive 12.4 million rubles from the federal budget and 2 million from the region.

Some volunteers told the online publication Verstka that they are motivated by the wages, so that, for example, they can build a house. Others seem inspired by patriotism; some appear simply to want an adventure.

One, named Vitaly, told Verstka: “I respect the achievements of our ancestors, and it’s hard for me to watch them get spat on. And, of course, there is the pleasant bonus in the form of payments the government offers.”

Others told Verstka that they were inspired to rid Ukraine of Nazism, an indication of the power of Russian state media, which has relentlessly plugged the notion that Russia’s action is to de-Nazify Ukraine.

If all the Russian regions each generated a battalion, the cost would be considerable. Kateryna Stepanenko estimates a 400-man unit would cost $1.2 million per month in wages, which she says is expensive given that the program will not produce elite units.

Chechen volunteers were the first to enter Ukraine soon after the invasion began. The Vostok Battalion saw action in Mariupol, where it was prominently involved in infantry operations. The Chechen leader, Ramzan Kadyrov, frequently lionized the Vostok Battalion.

At the end of April, Kadyrov said on his Telegram channel that “hundreds of brave soldiers from different corners of our immense country have decided to become part of the Russian liberation army.”

And in May, he said 200 “goodwill warriors” were graduating from the Russian University of Special Forces in Gudermes and leaving for Ukraine every week.

By some estimates, as many as 8,000 Chechens have gone to fight in Ukraine. They have been heavily involved in the campaigns to take Severodonetsk and Lysychansk.

Volunteers from Buryatia in the Russian Far East were also involved early; several have been killed, including one well-known for fighting in Syria.

More recently, other Russian regions have stepped up. One prominent case is the republic of Bashkortostan.

A retired navy officer, Alik Kamaletdinov, announced on social media he was recruiting for a volunteer battalion because “Bashkiria has always been a pillar of our state in difficult times. … Let’s support our country and our President Vladimir Vladimirovich Putin not by words but by deeds!”

The governor of Bashkortostan, Radiy Habirov, posted on Telegram last week: “Today we are seeing off the second Bashkir battalion to the Donbas.”

“Thus, more than 800 volunteers, all sons of Bashkortostan, will go to defend our country and brotherly Donbas.”

Other regions that have begun raising volunteer battalions include Chelyabinsk in the Urals and Primorsky in the Russian Far East. Photos of nearly 300 Chelyabinsk volunteers were posted last week.

The head of the recruitment office in Tatarstan, Evgeniy Tokmakov, said at a news conference that “battalions should be formed only from natives of Tatarstan, so that they can join the ranks, stand shoulder to shoulder, know each other.”

Several units of Cossack fighters are also being formed – not a surprise given that they were prominently involved in eastern Ukraine in 2014. The Orenburg region has already sent three Cossack battalions to the war.

The pace of recruitment is picking up – within the past few days the regions of Murmansk in the Arctic Circle and Tyumen in Western Siberia announced the formation of volunteer units.

Just how these battalions – most are smaller than a regular battalion – will be integrated into the Russian operation isn’t clear yet. The Tatar and Bashkir units will be made into motorized rifle battalions.

The volunteer battalion raised in Primorsky Krai will consist only of local residents and will go in support of the 155th Guards Marine Brigade, according to regional authorities.

There are signs that Russian manpower shortages in Ukraine are beginning to bite. Ukraine’s Center for Countering Disinformation says it found job vacancies for more than 20,000 Russian contract servicemen at regional employment centers. There have been persistent reports that some battalion tactical groups have had to be reconstituted.

But as one analyst puts it, a battalion is more than “a crowd with rifles.”

Stepanenko of the Institute for the Study of War said, “these poorly-trained recruits will likely be used as cannon fodder given previous Russian treatment of conscripts and proxy units.”

It’s hard to imagine how these disparate groups with no knowledge of the battlespace and rusty or non-existent military skills will influence the conflict. The task of infantry among Russian forces has been largely to take over places already obliterated by indirect fire.

Even so, Stepanenko said, the Russians are “continuing to take heavy losses without gaining much ground. They therefore require a constant inflow of Russian manpower to make good their losses.”

The Ukrainian military is tracking the units’ formation. Vadym Skibitskyi, a spokesman for the Main Intelligence Directorate, said Russia is planning to form 16 new battalions by the end of July. He told the online portal Krym.Reali that “according to our estimates, there will be about 4,000 people in each region, including Crimea.” Skibitskyi confirmed to CNN that his remarks had been accurately reported but declined to provide further details.

Stepanenko believes the ultimate aim is a form of mobilization by stealth.

“Putin seems to lack confidence that polls and protestations of support for the war will survive a general conscription effort. Recruitment for volunteer battalions or covert mobilization only affects a small percentage of servicemen and their families,” Stepanenko said.

“Such separation allows Putin to control the appearance of the invasion without upsetting most of the Russian male population and their families.”