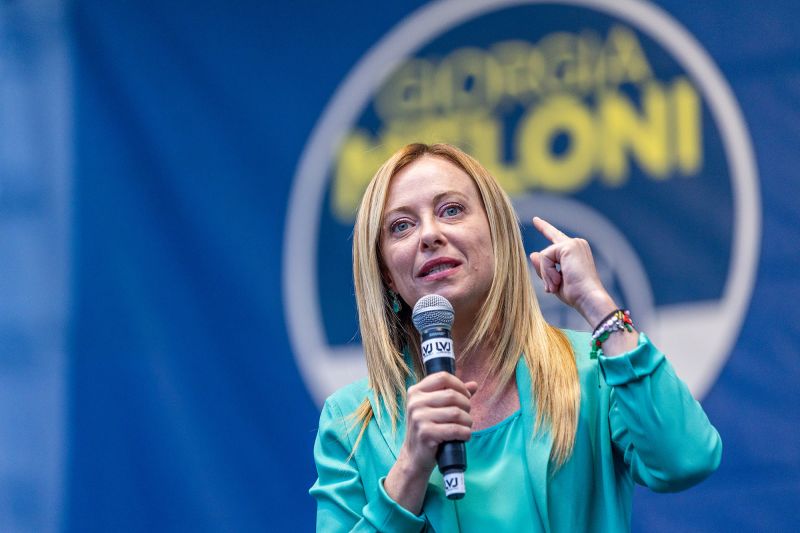 Polls opened Sunday in the Italian national elections, with the far-right Brothers of Italy party – led by Giorgia Meloni – poised to make big gains after the collapse of two governments since the last election.

Her ultra-conservative party, whose origins lie in post-war fascism, control just two of Italy’s 20 regions, winning just 4.5% of the vote in the 2018 elections.

But since the collapse of former Prime Minister Mario Draghi’s coalition earlier in this year – which triggered the snap election – the Brothers of Italy have only surged in popularity, with recent polling suggesting nearly a quarter of the electorate backs her.

Meloni, a 45-year-old mother from Rome who has campaigned under the slogan “God, country and family,” leads a party whose agenda is rooted in Euroskepticism, anti-immigration policies, and one that has also proposed weakening LGBTQ and abortion rights.

Her astronomical rise in popularity is a reflection of Italy’s longstanding rejection of mainstream politics, seen most recently with the country’s support of anti-establishment parties such as the Five Star Movement and Matteo Salvini’s League.

In 2008, as prime minister, Berlusconi named her as his sports minister, making her the youngest minister to hold that position.

And in the 2018 election, Meloni was Salvini’s junior partner in the center-right alliance. But this time, she’s in charge, and has hinted that, if elected, she may not give Salvini a ministerial portfolio – which would strip him of the power to potentially bring her government down.

Trailing behind in recent polling is the center-left coalition, led by the left-wing Democratic Party and centrist parties +Europe. The parties formed an alliance with another centrist party Azione, whose alliance following Draghi’s resignation to counter a lurch to the right, but it broke down shortly after it was formed, further opening the door to Meloni.

Italians are voting on a number of hot button issues, including Italy’s cost-of-living crisis, a 209-billion euro package from the European Covid-19 recovery fund and the country’s support for Ukraine.

Meloni differs from Berlusconi and Salvini on a number of issues, including Ukraine, and has no connection to Russian President Vladimir Putin, unlike her partners, who have said they would like to review sanctions against Russia because of their impact on the Italian economy. Meloni has instead been steadfast in her support for defending Ukraine.

The Democratic Party, led by former prime minister Enrico Letta, strongly opposes Putin and his war in Ukraine, openly supports LGBTQ rights, including same-sex marriage – which was made legal in 2016 – and legislation to combat homophobia.

If her party wins, Meloni could also become Italy’s first female prime minister. However her politics do not mean that she is necessarily interested in advancing women’s rights.

Emiliana De Blasio, adviser for diversity and inclusion at LUISS University in Rome told CNN that Meloni’s politics are more important than her gender, but that she has not proven herself to be a feminist first.

“We need to reflect on the fact that Giorgia Meloni is not raising up at all questions on women’s rights and empowerment in general,” she said.

The Italian elections come as other far-right parties in other European countries have marked recent gains.

In France, despite far-right candidate Marine Le Pen losing the French Presidential election to Emmanuel Macron in April, her supporters were heartened at her share of the popular vote, which shifted France’s political center dramatically to the right.

And in Sweden, the anti-immigration Sweden Democrats, a party with neo-Nazi roots, are expected to play a major role in the new government after winning the second largest share of seats at a general election earlier this month.

If Meloni’s party wins, it might very well confirm that a resurgent populist wave that’s been sweeping across Europe is here to stay.