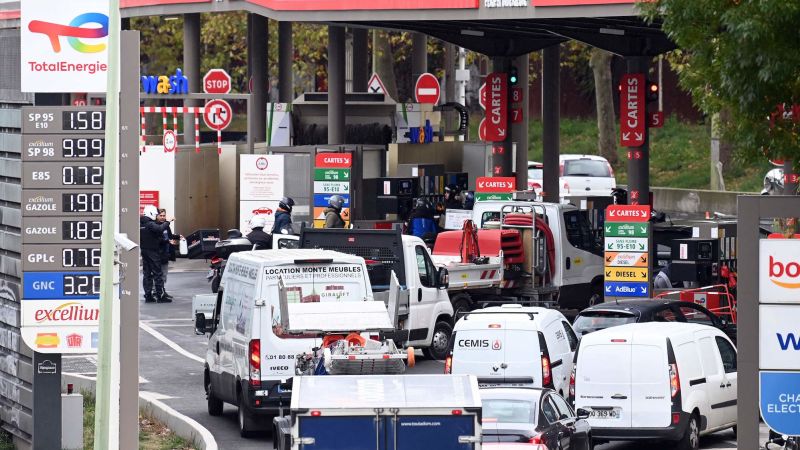 Macron declared Monday his desire for a solution “as quickly as possible” to the protests, promising to “do his utmost” to find one, according to CNN affiliate BFMTV.

The government ordered strikers at two fuel depots in Feyzin, near Lyon, to return to work for several hours on Monday or face criminal charges, according to France’s energy minister, Agnes Pannier-Runacher.

This the second time in recent weeks that the French government has taken the unusual step of requisitioning essential staff in the face of weeks-long strikes at refineries owned by ExxonMobil and TotalEnergies, which have disrupted supply to thousands of gas stations.

One of France’s largest unions, CGT, has refused to accept the terms of a wage deal agreed upon between TotalEnergies and two other unions, CFE-CGC and CFDT. The agreement includes a 7% salary increase for 2023 and a bonus for all employees equivalent to one month’s pay. CGT has demanded a 10% pay raise.

But French Finance Minister Bruno Le Maire said the strikes were “unacceptable and illegitimate,” because wage agreements had been met with the majority of workers. “The time for negotiations has passed,” he added.

In an interview with France Inter, a radio station, a representative of CGT, Philippe Martinez, claimed that “several thousand” workers were still striking, contradicting government ministers who have referred to striking workers as both “a handful of workers” and “several hundred people” in interviews.

Transportation minister Clement Beaune told France Inter that the only way out of the crisis is an end to strikes.

Meanwhile, commuters could be facing days of travel chaos if planned strikes in the Paris public transport network and parts of the national rail network go ahead. Beaune said that in the worst affected regions, only one in two trains will be running on Tuesday.

The industrial action takes place against a backdrop of rising living costs in France, where electricity bills are surging as a result of a cut in Russian natural gas supplies that has sparked an energy crisis in Europe. On Sunday, thousands marched through central Paris to protest the crisis and “climate inaction.”