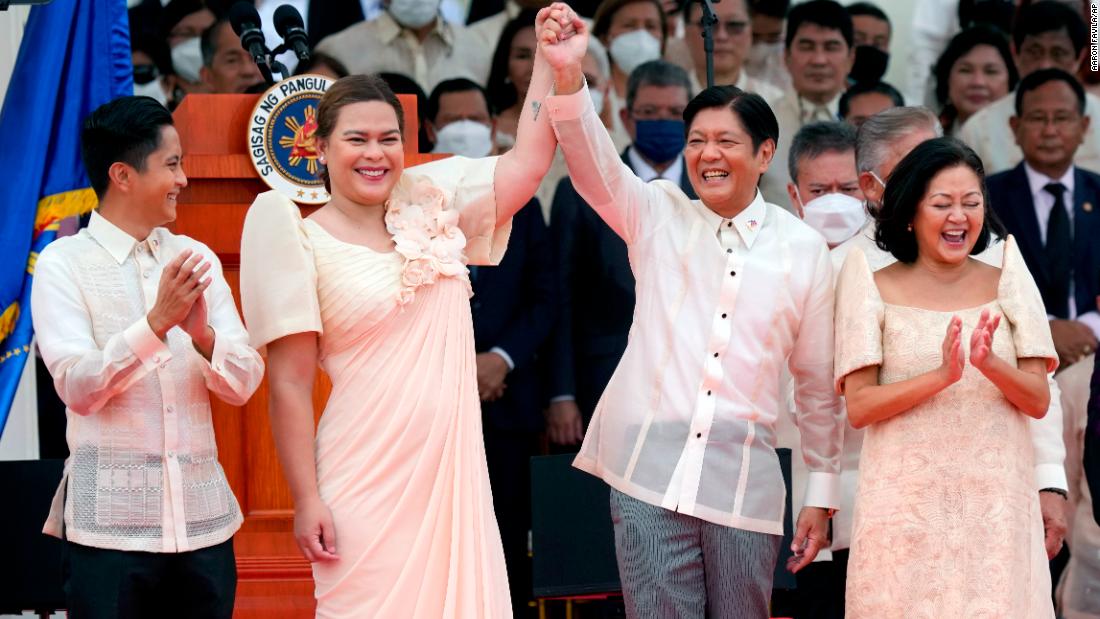 Marcos Jr., known as “Bongbong” in the Philippines, won a landslide in May 9 elections on a platform of national unity and a promise of more jobs, lower prices and more investment in agriculture and infrastructure.

But critics say his rise to power was the culmination of a decades-long attempt to rebrand the Marcos family’s name and image, most recently through a supercharged social media campaign.

Marcos Jr., 64, is the son and namesake of late dictator Ferdinand Marcos Sr., whose 21-year kleptocratic rule of the country from 1965 to 1986 was marked by human rights abuses, widespread corruption, and plunder of the state coffers.

The former senator and congressman took his oath of office at the National Museum of Fine Arts in the capital Manila before Supreme Court Chief Justice Alexander Gesmundo, according to CNN affiliate CNN Philippines.

In his inauguration speech, Marcos Jr. said his “call for unity” resonated with the people to “deliver the biggest electoral mandate in the history of Philippine democracy.”

“This is a historic moment for us all,” he said. “You picked me to be your servant, to enable changes to benefit all. I fully understand the gravity of responsibility you put on my shoulders. I do not take it lightly but I am ready for the task.”

Marcos Jr. thanked his mother, the 92-year-old former first lady Imelda Marcos, who attended the ceremony. He also praised his father, the late dictator, in his speech.

“I once knew a man who saw what little had been achieved since independence. In a land of people with the greatest potential for achievement, and yet they were poor. But he got it done. Sometimes with needed support, sometimes without. So will it be with his son — you will get no excuses from me,” he said.

Marcos Jr. spoke of healing divisions in the country, promised to grow the economy, recover from the pandemic and lead a more unified, prosperous country.

“I am here not to talk about the past, I am here to tell you about our future. A future of sufficiency, even plenty, of readily available ways and means to get done what needs doing,” he said. “I will get it done.”

On Tuesday, Marcos Jr. survived a last-ditch attempt to disqualify him when the Supreme Court unanimously ruled against two petitions seeking to cancel his candidacy for alleged tax offenses, according to CNN Philippines.

Marcos won the election with 31.6 million votes, or 58.77% of ballots cast — a margin not seen in decades — and replaces outgoing President Rodrigo Duterte.

His running mate, Sara Duterte-Carpio, the former President’s daughter, was sworn in as vice president on June 19, and they will serve until 2028.

Marcos Jr. had previously asked the world to judge him by his actions, not by his family’s past. But his election campaign was dominated by his father’s legacy, including the slogan “rise again” tapping into the nostalgia of some who saw the period under Marcos Sr. as a golden era for the country.
His father’s corrupt and brutal rule of the Philippines was bolstered by almost a decade of martial law from 1972 to 1981. During that time, tens of thousands of people were imprisoned, tortured or killed for perceived or real criticism of the government, according to human rights groups.

The Presidential Commission on Good Governance (PCGG), tasked with recovering the family’s ill-gotten wealth, estimates about $10 billion was stolen from the Filipino people.

The Marcos family has repeatedly denied abuses under martial law and using state funds for their personal use. Campaigners say the Marcoses were never held fully accountable and victims of martial law are still fighting for justice.

Critics of Marcos Jr. see his rise to the presidency as a whitewashing of Philippine history and an attempt by the Marcos family to rewrite the abuses and corruption committed during his father’s dictatorship.

Marcos Jr.’s inauguration marks the end of a six-year term for Duterte, whose bloody legacy is tied to a nationwide crackdown on drugs that has claimed the lives of more than 6,000 people, according to police.
Duterte’s administration targeted civil society and the media — slapping tax evasion charges on local, independent media outlets that challenged the government’s policies and claims, and arresting editors. On Tuesday, Nobel Peace Prize laureate Maria Ressa said the government had ordered her news organization Rappler to shut down.
Outspoken Duterte was also known for a history of disparaging remarks, including misogynistic comments about women, the Catholic Church, and world leaders.

Some fear Marcos Jr. will continue down Duterte’s path and that disinformation will further obscure the truth, making it harder to hold those in power accountable.

Despite his record on human rights and the Covid-19 pandemic, which worsened the country’s hunger crisis, Duterte remained hugely popular domestically.

Supporters expect Marcos Jr. and Duterte-Carpio to continue Duterte’s policies on infrastructure and his controversial “war on drugs.”