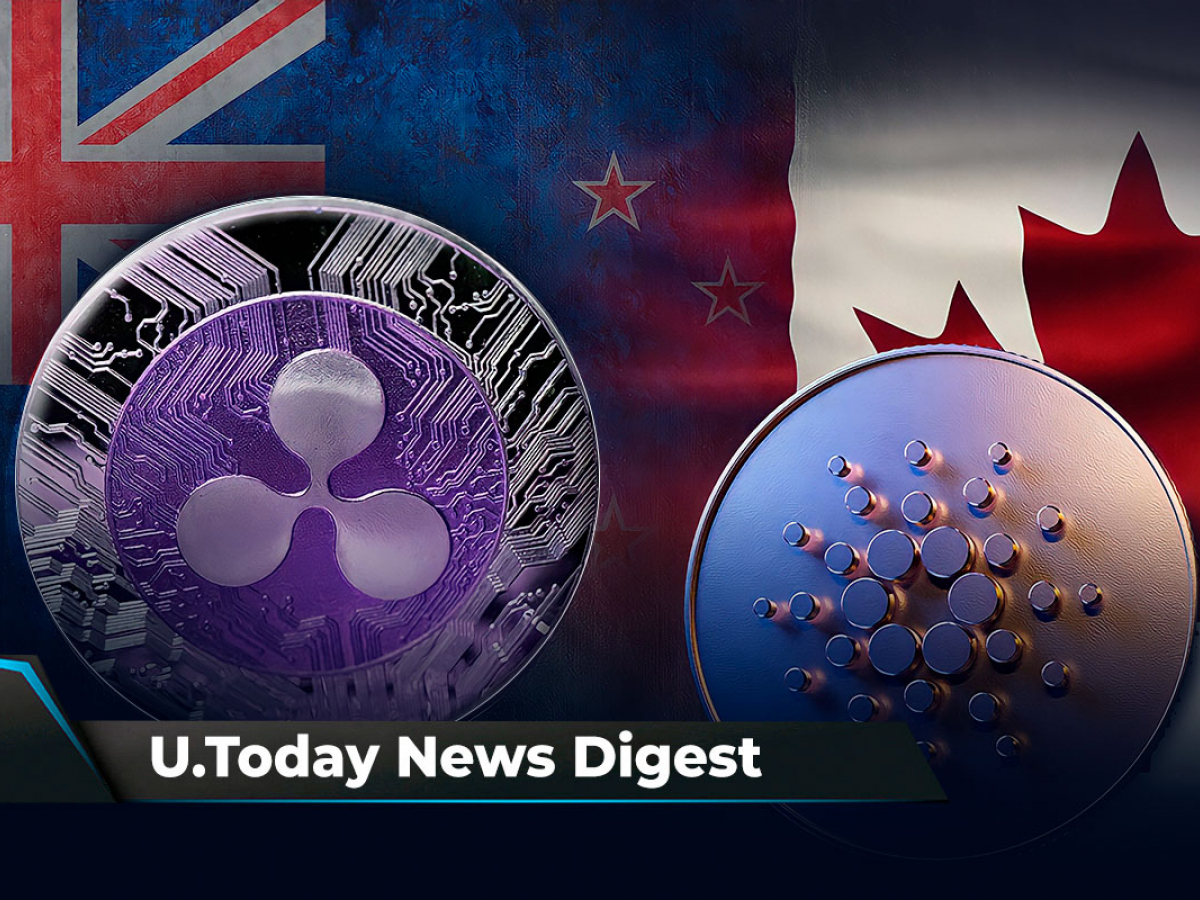 Check out the top four news stories over the past day presented to you by U.Today.

Netcoins, one of Canada’s largest cryptocurrency exchanges, has announced that trading of Cardano’s native asset, ADA, is now live, along with SOL, DOT and GALA. Besides, according to Ledger’s recent tweet, ADA has become available for management in Ledger Live on desktop and Android. The Ledger team is currently working on adding compatibility for iOS on both the ledger and Ledger Live platforms. Meanwhile, the International Association for Cryptologic Research (IACR) has accepted IOG’s research paper, “Ofelimos: Combinatorial Optimization via Proof-of-Useful-Work: A Provably Secure Blockchain Protocol,” for Crypto 2022. As stated by Cardano creator Charles Hoskinson, this was “pretty relevant to the future of Cardano.”

Airwallex, a Ripple partner, has announced the launch of its global payment services in New Zealand. Businesses in the country will now have access to Airwallex’s global payment services, which act as an alternative to traditional banks. In the meantime, Ripple is going to help its partner, Lotus, a British performance car manufacturer, to enter the NFT market by providing technical support on the XRP Ledger (XRPL) network. Also, the XRP Ledger Foundation (XRPLF) is now home to the authoritative repository for the XRPL protocol code base, Rippled. Nik Bougalis, Ripple’s director of engineering, stated that Ripple would continue to contribute to the codebase while also suggesting the introduction of native AMM functionality as the next stage of development for XRPL.

According to YCharts’ data, shares of Grayscale Bitcoin Trust (GBTC) began trading at a steep discount of almost 35%. This occurred after the company’s request to convert the trust into an exchange-traded fund was denied by the SEC in spite of months of intense lobbying. The regulator expressed concerns regarding market manipulation while reiterating its prior rejections. Grayscale CEO Michael Sonnenshein called the SEC’s decision “deeply disappointing.” The company has fulfilled its threat to sue the federal agency if its ETF filing gets denied, taking the SEC to court immediately after the unfavorable verdict. Grayscale’s senior legal strategist, Donald B. Verrilli Jr., accused the regulator of acting “arbitrarily and capriciously” when it comes to its treatment of different investment vehicles.

The Ethereum network continues to burn a sizable number of coins every day despite dropping blockchain activity across the cryptocurrency market and the network’s declining revenue. According to WatchTheBurn Ethereum network tracker, more than 2.5 million ETH coins (worth more than $2.6 billion) were destroyed for good. Net issuance remains at 1.8 million coins, with a 52% reduction since implementing the burning mechanism. Unfortunately, following the cryptocurrency market crash witnessed in June and at the end of May, the coin burning rate has significantly dropped. At the moment, the burning mechanism removes around 4,000 ETH from circulation every day. Daily net issuance sits at around 7,000 ETH.