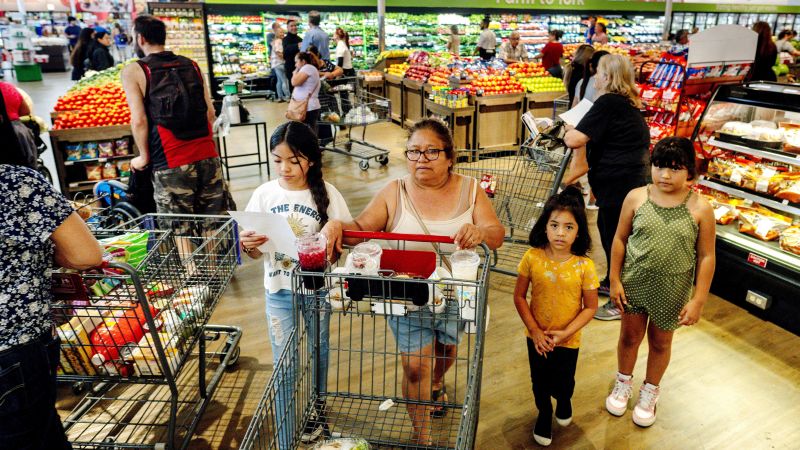 A key inflation report showed consumer prices came in hotter than expected in September, punishing Americans and giving license to the Federal Reserve to maintain its pace of historic rate hikes.

On a monthly basis, overall consumer prices increased by 0.4% from August, data released Thursday by the Bureau of Labor Statistics showed. Economists had projected that the monthly figure would rise by 0.2%.

On an annual basis, prices rose by 8.2% in September, a slower increase than the 8.3% rise seen in August, according to the Consumer Price Index, which measures the changes in prices for a basket of consumer goods and services. Economists had projected the pace of price increases would slow to 8.1% last month.

Core CPI, which strips out the volatile food and energy categories, measured a 6.6% increase in September year over year, reaching a level not seen since August 1982.

The month-to-month core reading showed prices rose 0.6% in September, matching August’s increase of 0.6%, a number that surprised investors and triggered a market meltdown as fears grew that persistent inflation would prompt even more aggressive action from the Fed.

“Inflation has kind of become like a cancer,” said Christopher S. Rupkey, chief economist of FwdBonds. “It started in one area of the economy, and now it’s spread rapidly, infecting other areas of the economy. … and it’s spreading to services, where it’s going to be much more persistent, much more stubborn, much more difficult to bring those prices back down,” he said, citing the cost of a haircut, which is unlikely to fall in the same way as goods prices do.

The core change in price for services, not including energy, increased 0.8% in September from the previous month, the highest monthly gain in three decades, BLS data shows. Shelter prices were up 0.7% in September and 6.6% annually.

“They’ve won a battle against inflation here, but they’re in danger of losing the war,” Rupkey said.

And while fuel costs may have come down somewhat from their June high, the effects remain felt to this day, said Stephan Weiler, director of the Regional Economic Development Institute at Colorado State University and a former research officer for the Federal Reserve.

“The problem is that gas is also an intermediate input for a lot of the core goods,” he said. “So it’s not like gas is totally off the table.”

Moreover, gas prices could well rise as a result of ongoing uncertainty related to Russia’s war in Ukraine and the decision earlier this month by OPEC+ to slash oil production by 2 million barrels per day, the biggest cut since the start of the pandemic.

The Fed has raised its benchmark interest rate five times this year as part of a plan to cool the economy by squashing demand from consumers and businesses.

But it takes time for monetary policy to have a pronounced effect on inflation and the economy — typically 12 to 18 months, said Cailin Birch, global economist at Economist Intelligence Unit.

“The Fed has been raising interest rates for less than nine months, and aggressively so for less than six months, so the delayed impact on prices is not unexpected,” she said in an emailed statement. “However, the renewed acceleration in some categories, particularly core inflation, suggests that price pressures are still firm and widespread. This is a cause for concern.”

The next significant inflation measure to be released before US central bankers meet in November will be a big one — the Fed-preferred Personal Consumption Expenditures index. The latest core reading showed that the gauge, which measures the prices consumers pay for goods and services, rose by 4.9% on a year-over-year basis in August.

Regardless of that outcome, Alemán is anticipating another massive rate hike at that meeting.

“I think the Fed is going to go for it with a 75 basis points [hike] in November and 50 to 75 [basis points hike] in December,” Alemán said. “Our position is the Fed should stop there and smell the coffee.”

“If the Fed goes higher than that, they risk sending the economy into a deeper recession than what we are expecting today,” he added.